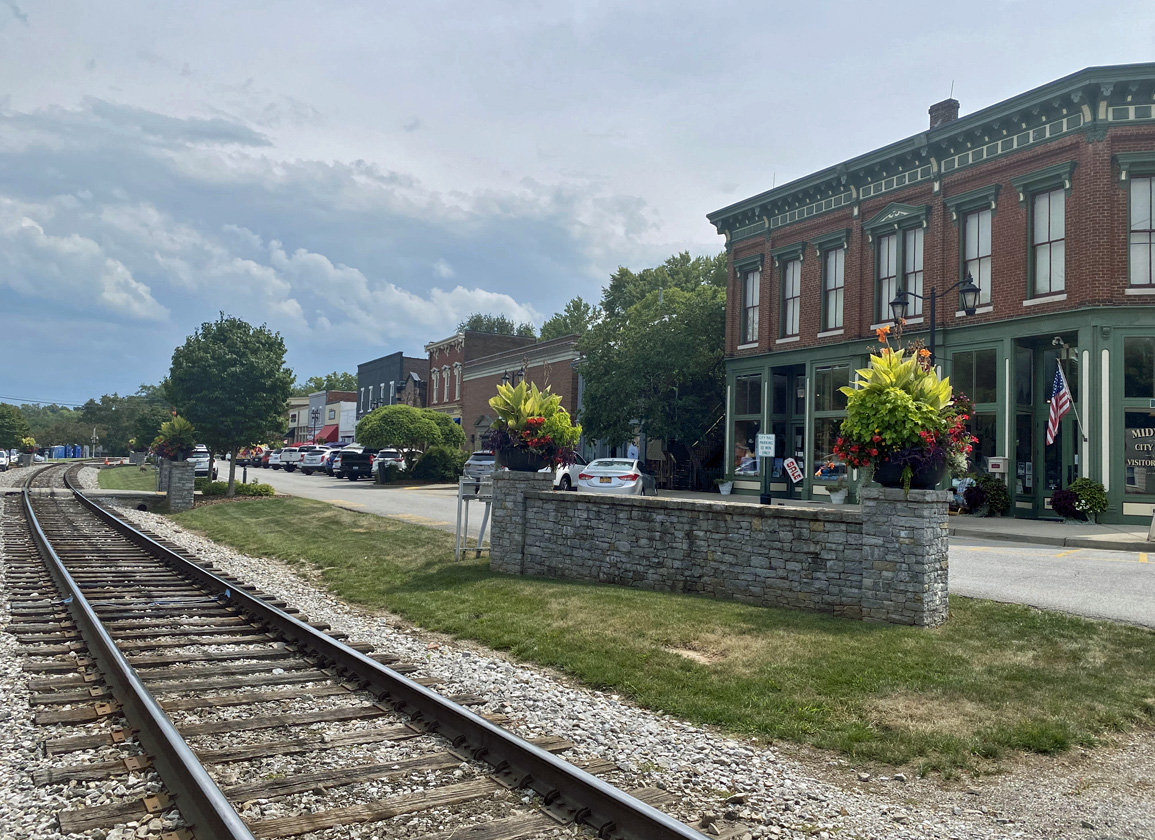 Read on for our visit to  downtown Midway, a charming community just a few minutes outside of Lexington, Kentucky. | Katie Ritz

On a sunny Friday in August, a vanload of a dozen wide-eyed tourists step onto Main Street in Midway, Kentucky. The picturesque town with a population of fewer than 2,000 is easy to miss passing through, but for travelers who do happen upon it, the charming community is one they'll soon be eager to revisit.

“This is just a lovely town,” said one woman from Kansas after touring Midway's historic downtown for the first time. “It's amazing how clean the storefronts are and how friendly all the owners are.”

“There's a lot of things to see and do,” her travel companion added. “The people are very nice and it's been wonderful. To be able to get an old-fashioned soda just made our day.”

The sodas she mention come from Railroad Drug and Old Time Soda Fountain, a family-run, full-service pharmacy with an old-time soda fountain that offers a variety of delicious treats and harkens a bit of mid-20th century nostalgia.

Those who stop in to satisfy their sweet tooth can gather outside at the shaded benches along the shop's storefront. If they visit at just the right time, visitors will catch a glimpse of the train that runs through the middle of Main Street–also known as Railroad Street– each day.

Historic Midway was the first town in Kentucky established by a railroad. In 1835, the Lexington and Ohio Railroad's line from Lexington to nearby Frankfort was completed and the first steam locomotive rolled through Midway, the half-way point between the two cities. 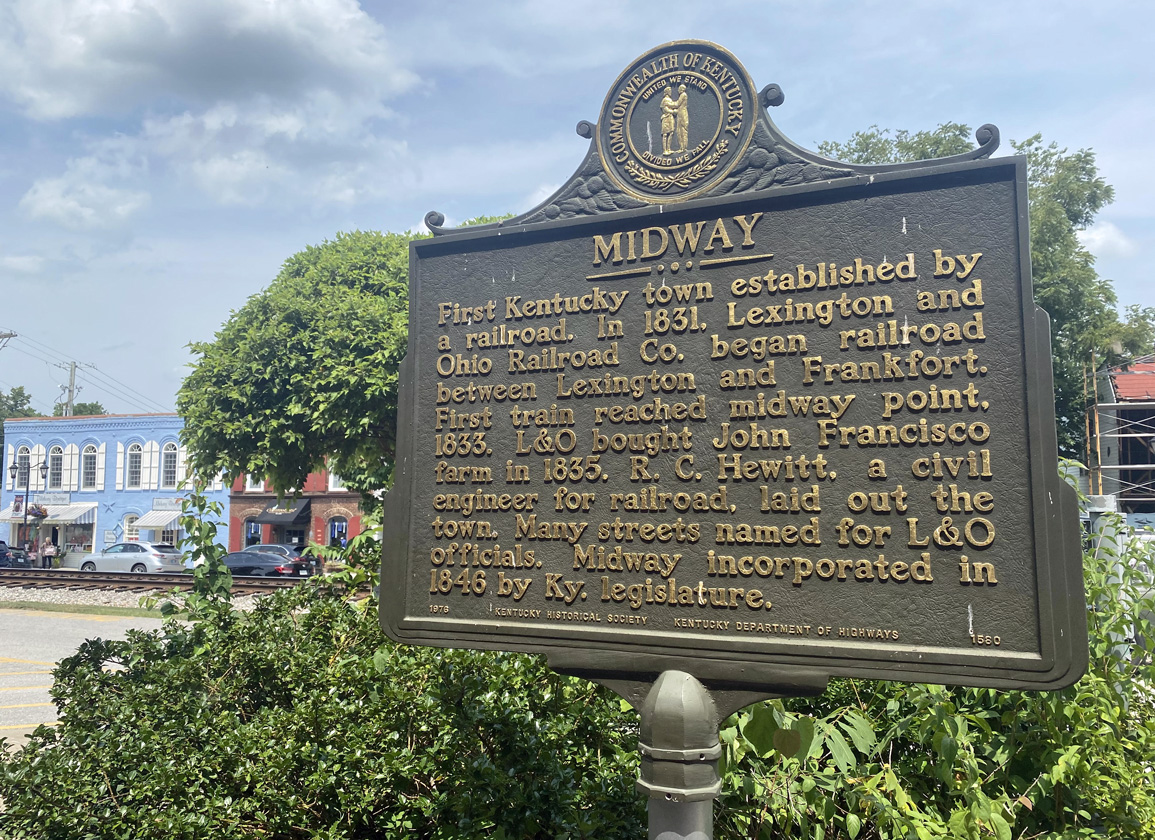 Midway was the first town in Kentucky to be established by the railroad. | Katie Ritz

At that time, the land the railroad sat upon was owned by Colonel John Francisco.

“When the train came through, it ruined so much of his topsoil that he was going to sue the railroad,” said Leslie Penn, who along with her husband Bill owns the Historic Midway Gift Store and is known amongst locals as the town's resident historian. “To avoid a lawsuit, they paid him $6,500 . Who knows where he went with that money, but he was gone. Then the train owned all the property. They blocked off the streets, named them after board members of the railroad and sold off the lots.”

The town continued to prosper and during the 1930's and 40's, up to 30 trains a day would pass through town. But as the railroad's heyday began to dwindle later in the century, fewer passenger trains came through until in 1963, Midway's depot closed.

Penn can remember the time when Midway's downtown was much less than the hive of activity that now attracts visitors from across the state and beyond.

“At one time there were very few shops downtown and there was only one restaurant,” she said.

As the dawning of the 21st century approached, efforts were made to revitalize the heart of Midway. In 1978, 176 buildings in Midway were placed on the National Register of Historic Places.

Penn and her husband were among the leaders to head the charge in restoring downtown. In 1995, the couple purchased an old building along Main Street and transformed it into what is now Historic Midway Gift Store, a popular stop for both tourists and locals that offers handmade crafts and gifts, jewelry and a variety of books on the history of Midway, informational texts on Central Kentucky Horse Country, guides to Southern cooking and more.

“This building was an old saloon and was built in 1880,” Penn said. “We had to renovate upstairs, put in electricity and take out the red shag carpet. We really found a lot of history in the building.”

Another shop a few yards down the street called gigi & george offers a combination of unique antiques and locally-made crafts.

“We like to say that we're a curious mix of old and new,” shop owner Morgan Castle said. “I started out with a passion for antiques and now all of our new things come from other small businesses. We've been here about two and a half years.”

While Castle's collection of antiques is constantly revolving as items are purchased and she brings in new treasures, she said they always has a few pieces that will attract the eye of a horse racing fan.

This summer, she offered a pair of chairs that were in the original sales pavilion at Keeneland up until the facility was remodeled in the 1970s. Castle said the vintage pieces are made of Indiana hickory. 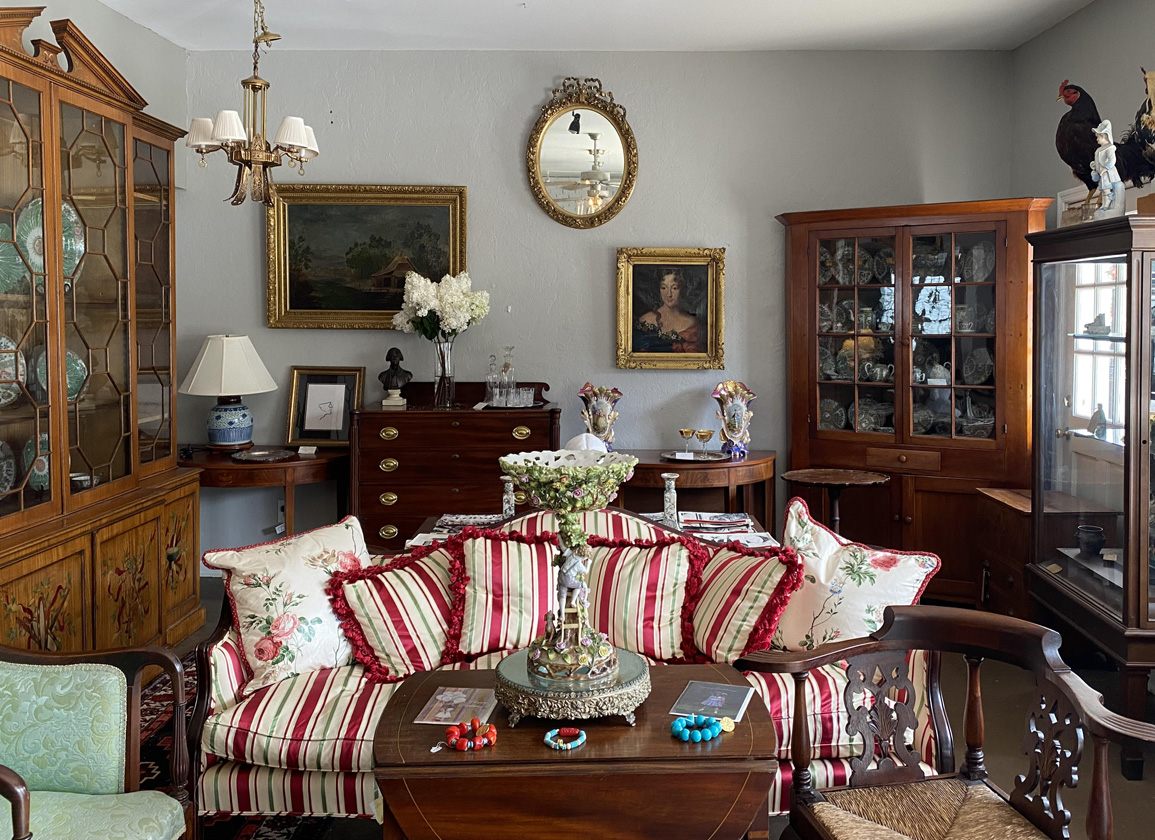 Gigi & George is described by the owner as “a curious mix of old and new.” | Katie Ritz

She also recently displayed an original painting of Hanover, a champion bred by Runnymede Farm who won his first 17 races in the mid-1880s and went on to become a leading sire in North America.

Any true equestrian will be drawn in by the lush smell of leather when passing by Freedman's Harness and Saddlery. The company specializes in saddles and tack for saddleseat and driving-type show horses and has been owned by the Freedman family for six generations.

“We are the only retail location of Freedman's here in Midway,” said boutique manager Jenny Vanwieren-Page. “If you buy something here, it has been handmade in our workshop by wonderful craftsmen in Canada, so it's really supporting a small business here in Midway.”

Shoppers can find just about anything they could dream up in the many shops surrounding Midway's Railroad Street. For the art enthusiast, Damselfly Studio Gallery offers artwork from over 200 regional artists and showcases many pieces depicting famous racehorses–both fan-favorites of today and some of the all-time greats. Antiquers can spend hours exploring Yeagers Antiques while boutique lovers will find plenty of options at Southern Sunday or Midway Boutique. Those hoping to look their best at Keeneland should visit Crittenden and Company Men's Clothing and memorable gifts are on hand for even the most difficult person to shop for at To You From Me and The Milam House.

After one has veritably “shopped 'till they dropped,” dining options in Midway's Historic District are just as extensive as the town's variety of merchants.

The Brown Barrel is a popular spot for locals. The restaurant's walls are graced with racing photos and mementos from the many prominent Thoroughbred farms surrounding the town-from Shadwell and WinStar to Hurstland Farm- and racing coverage is a constant on the televisions over the expansive bar. 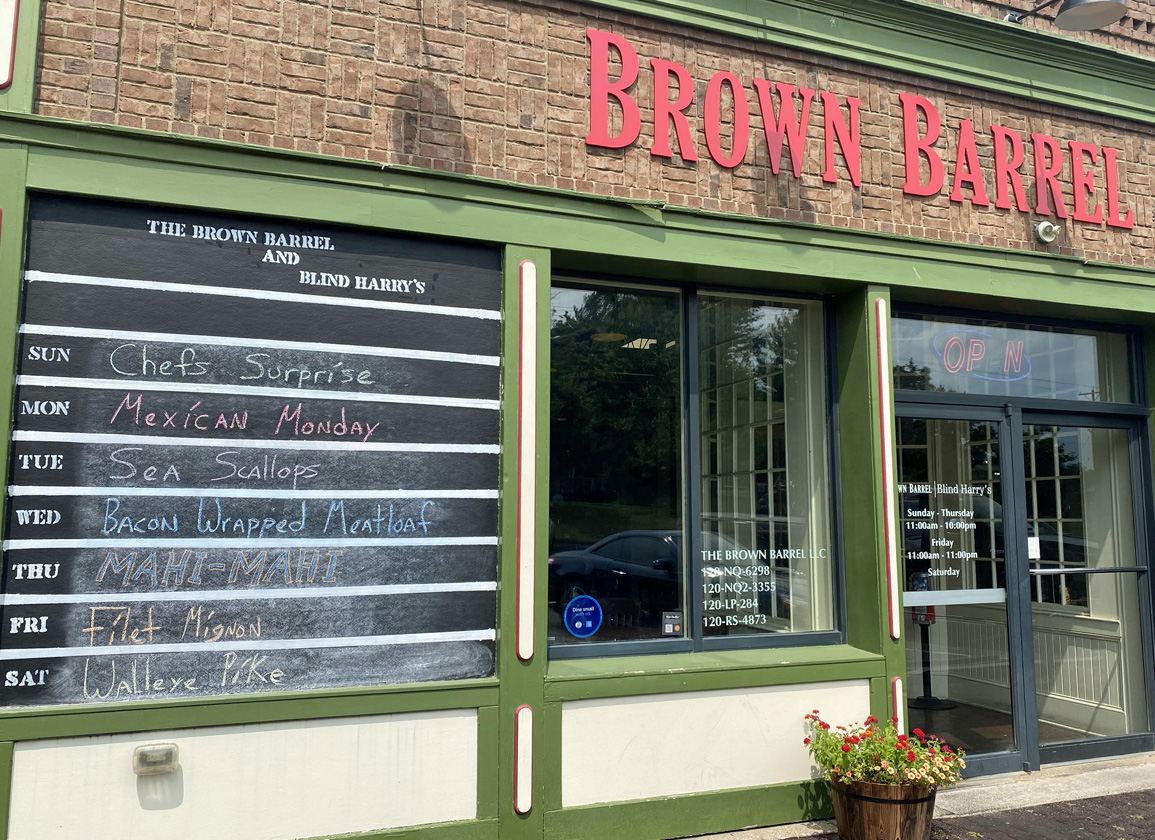 Stop by the Brown Barrel Restaurant on a Sunday to discover the Chef's Surprise special for the week. | Katie Ritz

“If you like hot browns, shrimp and grits, steak or seafood, we're the place to go,” said restaurant manager Donn Knattus. “It's casual and we also have an outdoor patio. We get tons of horse people-owners, people who work with horses, the whole gamut.”

Other dining options include Don Jockey, the first authentic Mexican restaurant in town, Goose and Gander, a family-owned restaurant that offers a variety of options including salads, sandwiches and pizza as well as an expansive wine and bourbon list, Heirloom, the fine-dining spot in town that uses fresh, local ingredients to create Kentucky-inspired dishes with a global sensibility, as well a Mezzo Italian, which is well-known for its mouth-watering, wood-fired pizzas and calzones.

Once their stomachs are filled, visitors can finish their tour of Midway by taking a quiet stroll along the train tracks down the main strip and enjoy the architecture of the buildings and the Southern charm of passersby stopping to say hello. While more and more travelers are learning about the must-see destination, Midway still retains its small-town community atmosphere.

“The neighbors all work together,” said Jenny Vanwieren-Page from Freedman's. “People have been here for years and years and it's a great community.”

“Midway is just special,” Morgan Castle of gigi & george added. “It's hard to describe, but it's the charm, it's the character and it's the charisma. All the shops are wonderful and we all complement each other. Of course, there are some of the best restaurants in the state here and we have the train that comes through multiple times a day, which is really interesting.”

Travelers will experience all that and more on a visit to historic Midway, Kentucky.