Despite Heat, Monmouth Officials Confident Haskell Card Will be a Go 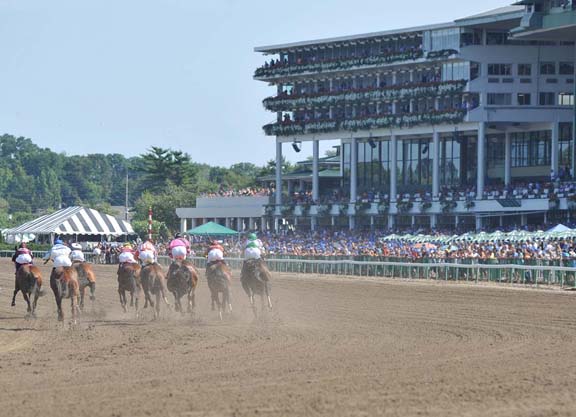 With temperatures set to reach the high nineties this weekend in the Mid-Atlantic region, a number of tracks have announced adjusted schedules, but Monmouth Park officials remain confident that the Saturday card featuring the GI Haskell S. will go off as planned.

“First and foremost, we are concerned about the safety of the horses and jockeys and want to make sure we do the right thing,” said Dennis Drazin, who heads the management team at the Jersey Shore track. “But we've been on top of it all week and right now nothing has changed. We think we will be ok.”

The heat was a factor for the running of the 2019 Haskell when temperatures flirted with the 100-degree mark. A decision was made to change the post time of the Haskell from 5:47 p.m. to 8:05 p.m in hopes that the temperatures would drop by the early evening. Six races on the card were cancelled

Drazin explained that the New Jersey Racing Commission rule calls for racing to be halted if the heat index reaches 105. A heat index takes into account the combination of high temperatures and humidity. The Saturday forecast for the Monmouth area is calling for a high temperature of 91 degrees. The National Weather Service has issued a heat advisory for the area through Wednesday of next week.

Drazin said that adjusting the schedule and times of the races Saturday would be a no-win proposition.

“The bottom line is that you put yourself in jeopardy no matter what you do,” he said. “If you  move post time until later and the heat index is still bad at 5, 6 o'clock, then you can't run. If you move it up to 9 o'clock in the morning, you might get some races in but I don't want to start our card at 9 on Haskell day or any other day.”

Post time for Saturday's first race at Monmouth is scheduled for 12:00 and post for the Haskell was listed as 5:45 p.m.

Drazin said the racing commission was monitoring conditions for Friday's card and gave the track the green light to run and hold the races at the regularly scheduled time. Temperatures Friday reached the low nineties.

“We were concerned about the heat index today,” Drazin said Friday. “I've spoken to the racing commission and have been in touch with them all day long. Their executive director has been on top of the weather and we got the blessing to go ahead and start the card. If the heat index ended up later in day to be dangerous, they would stop the racing. Looking at the week and looking at the forecast, we thought Friday and Sunday would be worse than Saturday. So we are hoping it will play out ok and that Saturday will be fine. We are a little concerned about Sunday. We may have to do something about Sunday.”

Meanwhile, tracks in the region were sent scrambling due to the excessive temperatures. The Maryland Jockey Club (MJC) has announced that the Sunday card at Laurel has been cancelled and rescheduled for Thursday. Post time for Saturday's races has been moved from a 12:40 start to 1:50. According to MJC Acting President Mike Rogers, the company uses a protocol called the WetBulb Globe Temperature (WBGT) measurement, which takes into account temperature, humidity, wind speed, sun angle and cloud cover to determine potential heat stress. It is different than the heat index, which takes into consideration temperature and humidity including for shady areas. Rogers said if the WBGT measurement is at 91.4, there is no choice but to cancel racing.

Colonial Downs has announced that Monday's card has been cancelled due to heat concerns. Their scheduled, featured stakes–the $150,000 Colonial Cup at 1 1/2m on turf–will now be run Wednesday, July 27 as originally drawn.

To the west, Ellis Park has announced that its races this weekend have been moved up to 10:30 a.m. local time because of the heat.