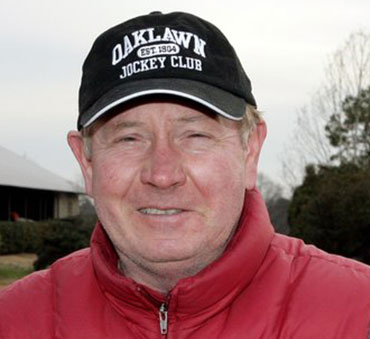 Lynn Whiting, who saddled Cal Partee's Lil E. Tee to a 16-1 upset in the 1992 GI Kentucky Derby, passed away Wednesday at the age of 77. Whiting was reportedly hospitalized for weeks earlier this year and had been undergoing physical therapy following a stroke he suffered in February.

Born June 28, 1939, in Great Falls, Montana, Whiting–the son of jockey and trainer Lyle Whiting–began training in 1968 and sent out his first winner at Lincoln Downs in Rhode Island with Fortunatus. Whiting experienced the greatest successes of his career with Partee, who also campaigned Lil E. Tee's sire At the Threshold (Norcliffe) to four graded stakes wins in 1984, including the GI American Derby, in addition to a third-place effort behind Swale in the GI Kentucky Derby. Partee's Big Pistol (Romeo) added that year's GI Haskell Invitational H., but it was Lil E. Tee who provided Whiting with his crowning moment of his career, winning the Run for the Roses eight years later, giving Hall of Fame jockey Pat Day the lone victory of his career in the Derby.

Whiting is survived by his wife, Nell, and daughters Carrier and Lori. Services are pending.