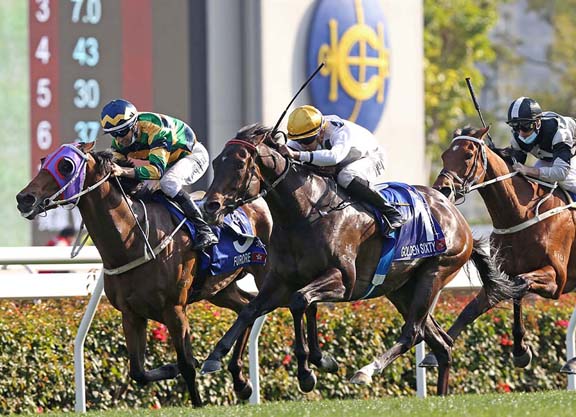 Golden Sixty (Aus) (Medaglia d'Oro) and Furore (NZ) (Pierro {Aus}), winners of the BMW Hong Kong Derby in 2020 and 2019, respectively, treated racing fans to an epic final-furlong battle in Sunday's G1 Citi Hong Kong Gold Cup, with the undisputed current king of the hill in the jurisdiction just clawing his way past Furore to take his current winning streak to 13 and his overall record to a spectacular 16 from 17. Golden Sixty is now within four victories of the record currently held by the legendary Silent Witness (Aus) (El Moxie).

The $1.35 (35-100) favourite was taken back to settle in the latter part of the field and switched off nicely for Vincent Ho, as Time Warp (GB) (Archipenko) set a very slow early tempo in advance of Playa del Puente (Ire) (Elzaam {Aus}), who nearly upset last year's Derby at 289-1. Columbus County (NZ) (Redwood {GB}) rolled forward to try to inject some pace mid-race, as Golden Sixty and Furore eyeballed one another back in the field, the dynamics squarely working against them. The opening 1200 metres were posted in a dawdling 1:15.09, better than a full second outside of standard, and Ho got to work on Golden Sixty, peeling him out and around horses at the 600 metres Meanwhile, Joao Moreira was happy to ride Furore for luck and stuck to the fence. As Golden Sixty wound up on the grandstand side, he looked like he was going to run away, easily claiming defending champion Exultant (Ire) (Teofilo {Ire}) with a furlong and a half to go while wanting to shift inward. But Moreira found a split in upper stretch, shot Furore through and battled with everything he had, only to be on the short end of the bobber. Golden Sixty's final half-mile was timed in :44.48, fractionally faster than Furore's :44.57, albeit with a far inferior trip around the second turn.

“I was quite confident that I would stay ahead of them but we fought hard–it wasn't easy, it was a bit unexpected to be that close,” Ho admitted. “I was just worried about the horse to the inside of him because Golden Sixty laid in a bit, he would have won easier if he didn't do that. Once he went past Exultant he wanted to lay in–it made it difficult for me but it's still a victory.”

With foreign targets off the table, the top two are expected to face a rematch in the G1 FWD QE II Cup over the same course and distance Apr. 25. From there, Golden Sixty could go for a sweep of the 'Triple Crown' in the G1 Standard Chartered Champions and Chater Cup (2400m), for which he stands to collect an HK$10-million bonus if successful.

For the first time in four years, a horse not named Beauty Generation (NZ) (Road to Rock {Aus}) has taken out the G1 Queen's Silver Jubilee Cup.

Waikuku (Ire) (Harbour Watch {Ire}), an unlucky runner-up to Furore in the 2019 Derby and winner of last year's G1 Stewards' Cup (1600m), was given a perfect ride by Joao Moreira, swooped in front with about a furlong to race and came away to an easy score over a game Southern Legend (Aus) (Not A Single Doubt {Aus}). The victory was the 1300th in Hong Kong for trainer John Size, whose total is exceeded by only the retired John Moore (1735) and Tony Cruz (1329).

“It probably means I've been here a long time and I'm doing my job well,” the understated Size said, reflecting on his move from Sydney to Hong Kong two decades ago. “Every achievement along the way in your career is meaningful. I couldn't have imagined that in my wildest dreams. Obviously, it's been a good move–very good for my career–and I hope is that I can do a good job for customers.”

Drawn gate eight this time, the former Peter and Paul Snowden trainee when raced as Leviathan hopped out best of all and controlled the pace through an opening 1000-metre split of 1:00.40. Still allowed to amble along on the circle, he put away pace-pressing Lucky Patch (NZ) (El Roca {Aus}) in upper stretch and had enough in the locker to hold off the fast-finishing outsider Russian Emperor (Ire) (Galileo {Ire}), winner for Aidan O'Brien of last year's G3 Hampton Court S. at Royal Ascot, who raced with first-time blinkers Sunday. Shadow Hero (Aus) (Pierro {Aus}) ran an improved race in third. Excellent Proposal was done no favours by the lack of pace and came from well back to be a sneaky-good fourth, his final 400m of :45.57 the second-fastest in the race.

“I was just happy to let my horse go because he's obviously a very big horse and I knew he was going to stay on well,” said Badel. “He was also very relaxed in front. It allowed him to take a very big breath before the effort and then he kept on well.”

Healthy Happy is the 18th black-type winner for Widden Stud's Zoustar, whose other stakes winner outside of Australia is the talented Singapore galloper Top Knight (Aus). He is the only winner to date from his multiple Australian Group 3-placed dam, a daughter of SW/GSP Dashing Granada and a half-sister to MSW & GSP Celebrity Girl (Aus) (Starcraft {NZ}), herself the dam of 2020 G2 Schweppes Thousand Guineas Prelude winner and G1 Schweppes Thousand Guineas third Instant Celebrity (Aus) (Not A Single Doubt {Aus}).

The dam of the 2-year-old colt Publicist (Aus) (Written Tycoon {Aus}), Lady Lakshmi produced a full-sister to the latter after being led out unsold on a bid of A$300,000 at the 2019 Magic Millions Gold Coast National Broodmare Sale. She dropped a Merchant Navy (Aus) colt in 2020 and is back in foal to Russian Revolution (Aus) on a late November cover.