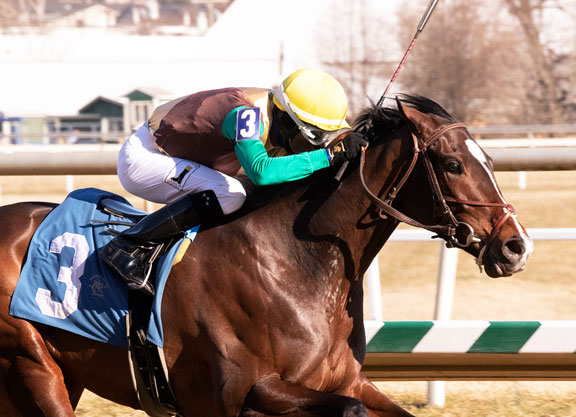 It seems to happen every year in the GI Preakness S. There is the local horse, fresh and rested after skipping the GI Kentucky Derby and with a resume that includes some stakes wins at Laurel or Pimlico leading up the second jewel in the Triple Crown. Then the hometown horse goes out and runs ninth or 10th, proving that they didn't have the class to compete with the best horses coming out of the Derby.

There's another horse that fit the narrative this year, but don't be surprised if this time there is a different ending to the story.

There's no doubt that Alwaysmining (Stay Thirsty) is a cut above the typical Maryland-based horse that shows up for the Preakness. He's won five straight stakes races and six overall, each one of them coming at Laurel. He's paid $2.10 in each of his last two starts while winning the Federico Tesio by 11 1/2 lengths and the Private Terms by 6 3/4 lengths.

“Honestly, I think he belongs with the best 3-year-olds in the country,” said Joe Cassidy, the racing manager for Gregory and Caroline Bentley's Runnymede Farm. “He's run very good numbers. He's been impressive when he does it. I know that we won't know until we put him up against those top horses, but we're very confident that he will make his presence known in the Preakness and get a good piece of it.”

Alwaysmining made his first four career starts for owner Jim McIngvale and trainer Laura Wohlers. He broke his maiden in his fourth career start, a June 30 maiden at Laurel. Cassidy saw a lot of upside to the horse and purchased him privately on behalf of Runnymede's racing division.

“I thought his races at Kentucky before he came to Laurel were OK because the horses that win those are usually pretty salty,” he said. “I thought he might get a little better with age and time and also he was a Maryland-bred. We run on the East Coast and we like the state programs that give you nice incentives to run in the states where the horses were bred. We thought we'd have a nice Maryland-bred we could have some fun with over the winter.”

Alwaysmining made his first start for his new connections in an allowance race and finished fifth. The trainer that day was Edward Graham. The Bentleys then turned the horse over to Kelly Rubley, a former middle school teacher who has only been training since 2014. For Rubley, the horse ran sixth on the grass in the Sept. 22 Laurel Futurity–and has not lost since.

Cassidy said the main reason the horse has improved so much is that he was gelded.

“He was still a colt when got him,” he said. “Laura Wohlers was very helpful, very nice. When we bought the horse, I said 'What would you do with this horse?' and she said 'Castrate him immediately.' I think that made all the difference in the world for the horse.”

The winning streak began with a 10-length romp in an allowance race and continued with a 2 1/2-length win over state-breds in the Maryland Juvenile Futurity. Next up was an open company race, the Heft S., which he won by 1 1/2 lengths over Win Win Win (Hat Trick {Jpn}), who has gone on to finish third in the GII Tampa Bay Derby and second in the GII Toyota Blue Grass S. Win Win Win will be among the starters in Saturday's Derby.

It was at about this time that the Alwaysmining team started to think they had a quality horse on their hands. After the Heft, he won the Miracle Wood by 4 1/4 lengths over Gray Magician (Graydar), another horse in the Derby field.

With the wins building up, virtually any other owners would have started to map out a schedule to get their horse to the Derby. They nominated the gelding to the Triple Crown, as well as some races that involved Kentucky Derby points. But the temptation to point to the Derby was never that strong. The Preakness was always the choice.

“Ultimately, with this horse being a gelding, one of our main goals was the longevity of his career,” Rubley said. “Putting him through the stress of the Derby preps and the Derby itself didn't seem like the most logical step for the horse. I'm happy with the decision. I think we made the right choice. The Derby is a grueling trip. Sure it would be fun to be there, but I'm glad we picked this path.”

He destroyed the competition in the Private Terms and may have run the best race of his life in the Tesio. Not only did he win by 11 1/2 lengths, but he rated off the pace under Daniel Centeno, sitting third early. It was the first time during the winning streak that he had not won wire to wire.

“The discussion Danny and I had before the Tesio was he would try to go to front but if it didn't work out he would settle and try to keep him to the outside,” Rubley said. “It was a relief to me to see that the horse can settle. I thought so all along, but I needed to see it to really believe it. I was very happy with that race. It gives me more confidence going into a race like the Preakness.”

The Tesio is a “Win and You're In” race for the Preakness, so Alwaysmining is guaranteed a starting spot and the owners, who are based in Pennsylvania, will not have to pay an entry fee.

The last time a Maryland-based horse or a Tesio winner won the Preakness was in 1983 when Deputed Testamony pulled off the trick. In 2002, Magic Weisner finished second in both the Tesio and the Preakness. It can happen. Deputed Testamony's win was not a fluke as he went on later that year to win the GI Haskell. Is Alwaysmining as good? That's a question that can't be answered until Preakness Day. But he's a confident, improving horse on a winning streak and has been destroying his competition. That doesn't sound like a combination that should be taken lightly.

“We stuck with our path,” Cassidy said. “We were confident in what we were doing and we're going to find out if we were right or not.”