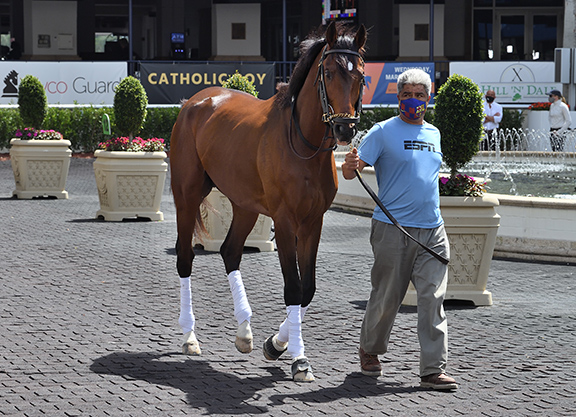 Greatest Honour (Tapit) rides a three-race win streak heading into the GI Curlin Florida Derby at Gulfstream Park, however, the Courtlandt Farm homebred certainly hasn't scared anyone away as 10 other sophomores have also signed on in Saturday's Classic prep. A large part of the draw is that the Florida Derby will offer 170 qualifying points for the May 1 Kentucky Derby on a 100-40-20-10 basis. The 1 1/8-mile test has produced the winners of 60 Triple Crown events.

The imposing bay kicked off his career with a trio of on-the-board finishes in New York, including a close-up head second behind Florida Derby rival Known Agenda (Curlin)–a last out 11-length winner in a Gulfstream optional claimer Feb. 26–at Aqueduct in November before capping the season with a win going 8 1/2 furlongs at Gulfstream Dec. 26. Sent off the second betting choice in the Jan. 30 GIII Holy Bull S., he employed his customary off-the-pace tactics to score by an eye-catching 5 3/4 lengths.

Sent off at even choice in the GII Fasig-Tipton Fountain of Youth S., the Shug McGaughey trainee found himself a bit farther back than expected early, but employed his typical late-charging style to win by 1 1/2 lengths over the speedy Drain the Clock (Maclean's Music).

“In the Fountain of Youth, the horse on the lead, Drain The Clock, who I think is a very, very good horse, kind of opened up, leaving the quarter pole. I thought [even if our horse] would kick in, we're going to have a hard time catching him but he caught him.”

He continued, “I think he was doing–three times–[something] he wasn't wanting to do, going a mile and a sixteenth over a speed-favoring track. And he was able to catch up all three times against pretty good company. So, I am looking forward to getting him stretched out where maybe in the Florida Derby he'll be laying like he was in the Holy Bull and not as far back as he was in the Fountain of Youth.”

McGaughey, who annexed his first Run for the Roses with Orb in 2013, believes the added distance will benefit his charge.

“He's a big, tall horse. He has grown a little over the winter,” McGaughey said. “So, that will be fun watching him develop. His pedigree says he'll run as far as you want him to run. With his stride, I don't think he's a horse with a quick turn of foot, but when he gets going, he covers so much ground that he catches up in a hurry.”

Drawn in post 7 Saturday, the colt will be partnered by Jose Ortiz, who was aboard for four of the colt's prior starts, including his two most recent wins.

“He's had a lot of races [eight prior starts]. Of all my horses, he's had the most starts. And he's second to [MGSW] Concert Tour [Street Sense] in money earned…He shows up.” said Baffert. “Once in a while, he'll run a flat race. He's doing well and I think he will like the mile and an eighth. He sort of comes running, but he's got to ship well and behave himself. And he's got to break well. He can't break like he did the last time.”

In his last work, the $1 million Keeneland September graduate blistered through five furlongs in :59.40 at Santa Anita Mar. 21.

In contrast to vast experience of Spielberg, Three Chimneys and eFive Racing's Collaborate (Into Mischief) enters the fray with only two prior starts under his belt. Fifth going six furlongs in the Gulfstream slop Feb. 6, the $600,000 Fasig-Tipton Saratoga yearling purchase rebounded to air by 12 1/2 lengths stretching to a mile Feb. 27, earning TDN Rising Star billing in the process.  (Joseph talks about Collaborate).

“It would mean a lot to win,” said trainer Saffie Joseph Jr. “This horse has a lot of ability. What we're asking him is a tall task, but it seems like he has the ability to overcome it.