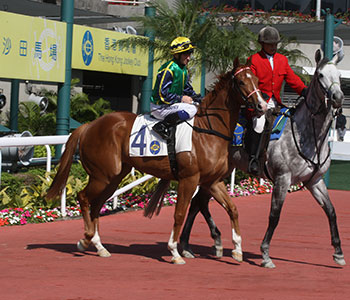 With the beginning of the Hong Kong 4-year-old series just a month away, a handful of the more prominent names are set to take their spots in a Class 2 handicap over 1400 meters Sunday evening at Sha Tin.

Carrying top weight of 133 pounds is the Ricky Yiu-trained Blizzard (Aus) (Starcraft {NZ}), who got the better of the heavily favored Thewizardofoz (Aus) (Redoute's Choice {Aus}) over this course and distance Oct. 25, but was no better than 10th in a contentious Class 1 at the trip Nov. 14. The chestnut sat a wide trip without cover that day, but a post-race exam revealed a significant amount of blood in his trachea, so that effort may well be a toss. Gerald Mosse rides from a tricky gate in 12.

Thewizardofoz was the talk of the town at the tail end of last season, with three wins from as many runs, but he's lost some of the luster this term and was handed a second straight defeat at odds-on last time, finishing an excuse-free third. A fifth in a recent barrier trial at Happy Valley–with Blizzard third–was more workmanlike than it was encouraging, but Joao Moreira jumps back in the saddle Sunday.

Hero Look (Ire) (Lope de Vega {Ire}), this year's G3 Premio Parioli winner, made an auspicious beginning to his Hong Kong career when rattling home to be second, a spot ahead of Thewizardofoz, in the aforementioned Class 2 Nov. 29.