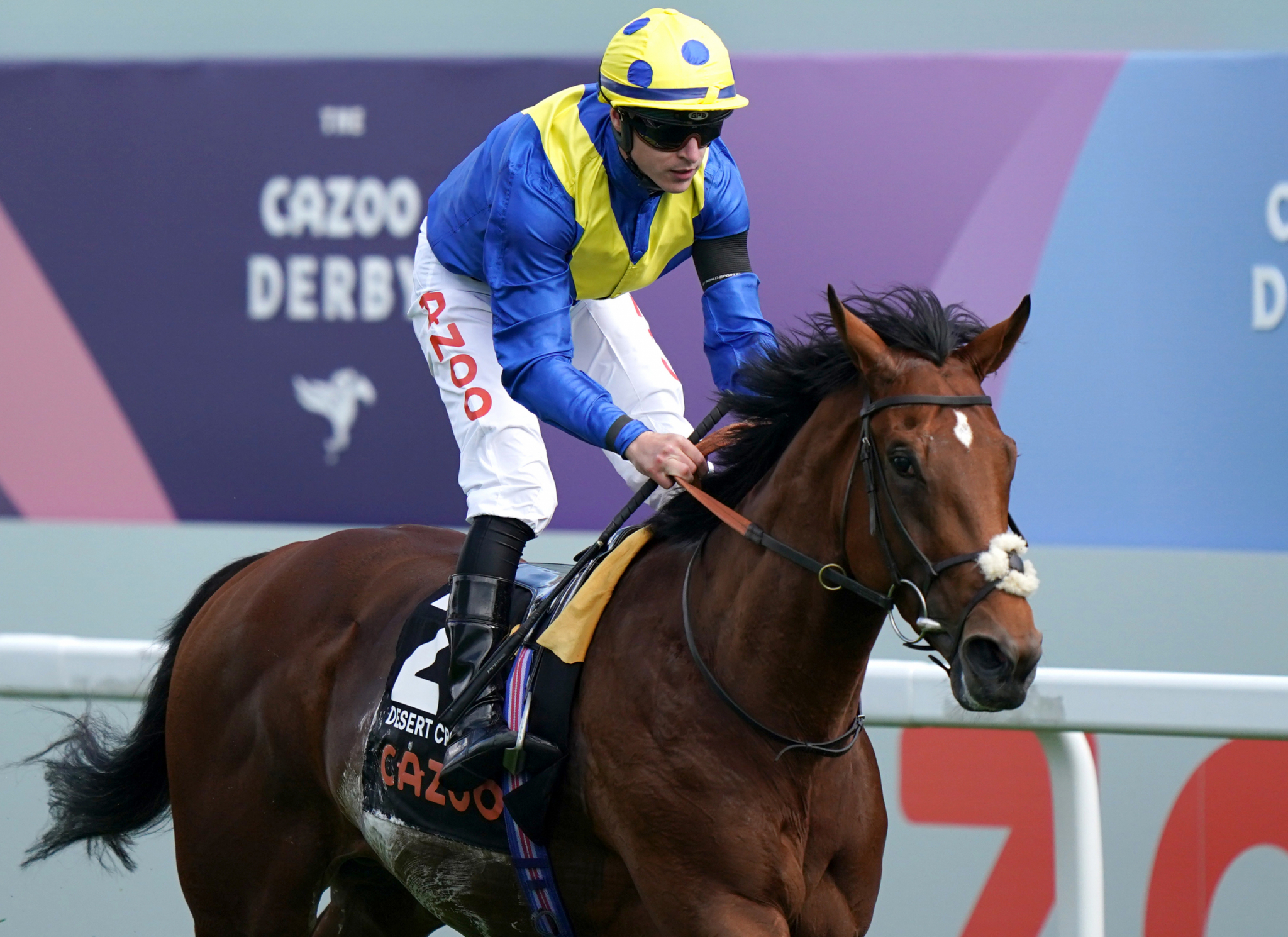 There were stage-managed fireworks exploding from Epsom's stands minutes before the 243rd staging of the G1 Cazoo Derby In Memory of Lester Piggott, but the real pyrotechnics were provided on the grass by Saeed Suhail's superb Desert Crown (GB) (Nathaniel {Ire}–Desert Berry {GB}, by Green Desert) as he proved a class apart in this special edition. Sent off the 5-2 favourite for a race which looked deep both numerically and in terms of talent and promise, the unbeaten TDN Rising Star marked the occasion with a performance to place alongside the best of recent times as he provided Sir Michael Stoute with a momentous sixth Blue Riband. Always cruising ominously under an admirably cool Richard Kingscote in mid-division staying wide out of trouble, the bay was let loose approaching two out and sprinted to the lead to win without being fully extended by 2 1/2 lengths from the 150-1 longshot Hoo Ya Mal (GB) (Territories {Ire}). As there had been on Friday, there was a hard-luck story as the race's clear second-best colt Westover (GB) (Frankel {GB}) got out of a traffic jam to storm home and finish a head back in third. It had been a dozen years since the 76-year-old Stoute had enjoyed Epsom glory, but the man who is officially the oldest trainer to win the Blue Riband had remained philosophical during the lean spell. “You realise your chances lessen, but I wasn't paranoid about it,” he said. “You just hope one would come along, and it did.”

If some had come to expect a slight demise in the fortunes of Newmarket's Knight, whose recent personal trials have served to put this sport into context, then the dramatic arrival of Desert Crown and his year-older stablemate Bay Bridge (GB) (New Bay {GB}) have put such thoughts firmly to the side. Freemason Lodge is abuzz once more, much as the neighbouring Warren Place had been at the start of the last decade, and in this Derby hero the establishment now boasts a totem to generate fear and awe in all as the season progresses. This was as far from a surprise as it gets in racing, as anybody who is more than a casual observer of racing would have known that Desert Crown's impressive display in the Dante on his seasonal debut and second career start off an interrupted preparation was only for starters. Only the yard's last Derby winner Workforce (GB) had come here with the audacity to win with such little race experience under his belt and it is worth remembering that he had been beaten 3 1/4 lengths by Cape Blanco (Ire) (Galileo {Ire}) at York prior to his seven-length rout on the Downs.

There was never a stage during Saturday's race that the blue-and-yellow first put into Epsom folklore by Kris Kin did not catch the eye, with Changingoftheguard (Ire) (Galileo {Ire}) merely providing the target up ahead. Despite the presence of the likes of Stone Age (Ire) (Galileo {Ire}), Star of India (Ire) (Galileo {Ire}) and Westover around him, the overwhelming feeling watching it all unfold was that nothing could go quick enough to take him out of his remarkable comfort zone. Kingscote took a sit for several yards passing three out with Ryan Moore struggling to make a fist of it even at that point on Ballydoyle's number one and there were echoes of Eddery on El Gran Senor. This time, there was no Secreto looming and not even a worthy competitor to hand and so it was left to Desert Crown to come home alone and allow connections a two-furlong-long spell to soak in the moment.

“He was very good today,” Kingscote stated humbly in the aftermath of his career-defining moment. “It was very smooth–he took all the preliminaries professionally, but then every time I've sat on him he has been very calm and today was no exception. I was hung out a little wide, but he was very comfortable and really well-balanced, changed leads over the road and off he went into top gear. The others weren't able to take him along and he has a good deal about him. At York, he took time to wind up but today was much more solid and alert. He's got gears and a lot of class, so I can't pigeon-hole him in terms of distance–at the two pole it was all over. It took guts for the connections to stick by me and let me ride. I'm not a champion jockey, not Ryan Moore, so that takes a lot for them not to look elsewhere.”

Stoute was quick to pay tribute to the rider. “I've been impressed with Richard since the time he got involved with us and I was very confident he would do the job today,” he said. “He's a deep thinker with beautiful hands and is calm.” Racing's most famous septuagenarian admitted to an aura of calm himself as he watched a sixth Derby victory unfold. “I was comfortable from the time he got to the top of the hill and he came down it very smoothly–he has a lot of talent and a good mind, which is very important,” he said.

“We were very hopeful after York that he might win the Derby. His performance delighted me as he had it won a long way out,” his handler added. “From an early stage, he was having little niggles and that is why he didn't run until the backend last year. There was nothing serious–he was maturing and developing and that was causing a few little problems with niggles. Shergar was very special and he hasn't quite reached that stage, but he has potential.” Of future plans, he said, “I think you have to just go home and see how they take it and we will just try and get it right and see how his recovery is. These good horses have good acceleration and he won the Dante over a mile and a quarter, so I think 10 or 12 will be no problem.”

The 2022 Derby's most significant footnote was the misfortune of Juddmonte's G3 Sandown Classic Trial winner Westover, who was stopped just as he was winding up heading to two out. As the gap between Stone Age and West Wind Blows (Ire) (Teofilo {Ire}) shut, the route to the inside was taken by the slaloming outsider Hoo Ya Mal and Rob Hornby had to wait several seconds to angle wide and unleash his mount's closing effort. When it came, it was impressive as he ate up an abundance of lengths and it was no surprise to hear connections mention the St Leger afterwards.

“He ran an amazing race and showed his quality and what an exciting horse he is to look forward to,” Westover's jockey Rob Hornby said. “Full credit to Sir Michael Stoute, who produced the winner beautifully and to Richard. Ryan and Richard were drawing me into it and he brought himself into a real nice position and warmed into it well, but when the gap was there he wasn't quite quick enough to get in. It got quite messy and I had to check and check again, but he really powered home and galloped through the line very strongly.”

“Epsom is tough and as Frankie said yesterday, you'd love to be beaten fair and square but he didn't really have a clear run,” Hornby added. “A lot goes into these days–it's a big team effort and it didn't go our way, but he's a hell of a horse. I'm gutted, but we'll pick ourselves up and go again–how he took the preliminaries, travelled in the race and hit the line makes me excited about what a future he is going to have. He stays very well and is relaxing nicely, so he's going to keep improving.”

For Ahmad Al Shaikh, a runner-up finish at big odds in the Derby was again the end result of the decision to pitch one of the race's apparent fringe players into the fray. This was a significant upgrade on Hoo Ya Mal's third in the G3 Craven S. and distant second in the Listed Newmarket S., but it was no fluke over the furthest trip he has raced and he was duly able to emulate the 2020 runner-up Khalifa Sat (Ire) (Free Eagle {Ire}). It is beginning to feel like Green Team Racing are genuinely lucky around here and trainer Andrew Balding, who also saddled the fourth-placed Masekela (Ire) (El Kabeir) at 66-1, was quick to put all the credit at the owner's door. “I have Ahmad Al Shaikh to thank entirely, because I didn't want to run in the race but he insisted,” he explained. “At the end of the day, he made a very good argument that if the horse who was supplemented won it we'd think where would we have finished, so it was great decision. He just got the trip and has a lot of class, while Andrea [Atzeni] said that Masekela needs further which surprised me.”

David Probert said of the runner-up, “Second in the Derby is massive for me and it hasn't really sunk in yet. I looked up about a furlong out and I could see Richard was only really teasing me, which was quite heartbreaking in a way. Obviously he was trying a mile and a half for the first time and he'd never run at this level, so it was all about keeping a lid on him and getting him to relax. He got into a very good rhythm the whole way around and we got a nice position and then hunted our way up the inside. It opened up quite nicely and his last furlong was his best. He saw it out really well and there are better things to come.”

This was a first Derby victory for Nathaniel, fittingly a year on from that of his great rival Frankel, and a huge moment for the Teversham-based Strawberry Fields Stud. Sold for 280,000 guineas at Tattersalls October Book 2, Desert Crown boasts a group-winning half-brother in the G3 Premier Cup scorer Archie McKellar (GB) (Archipenko) but little of major note close up in his pedigree. Where the alchemy comes in is via the dam Desert Berry's own second dam, Juddmonte's listed scorer and group-placed Binary (GB) (Rainbow Quest) who was responsible for the Scandinavian champion Binary File (Nureyev) and, more importantly, the top producer Binche (Woodman). She was responsible for the G1 Prince of Wales's S. hero Byword (GB) (Peintre Celebre), the four-times top-level scorer Proviso (GB) (Dansili {GB}) and the G2 Prix Eugene Adam winner Finche (GB) (Frankel {GB}). Also connected to another multiple grade I winner in Wandesta (GB) (Nashwan), Desert Berry's 2-year-old filly is by Al Kazeem (GB) while she also has a yearling colt by Study of Man (Ire).