Derby Dreams Come In Due Time 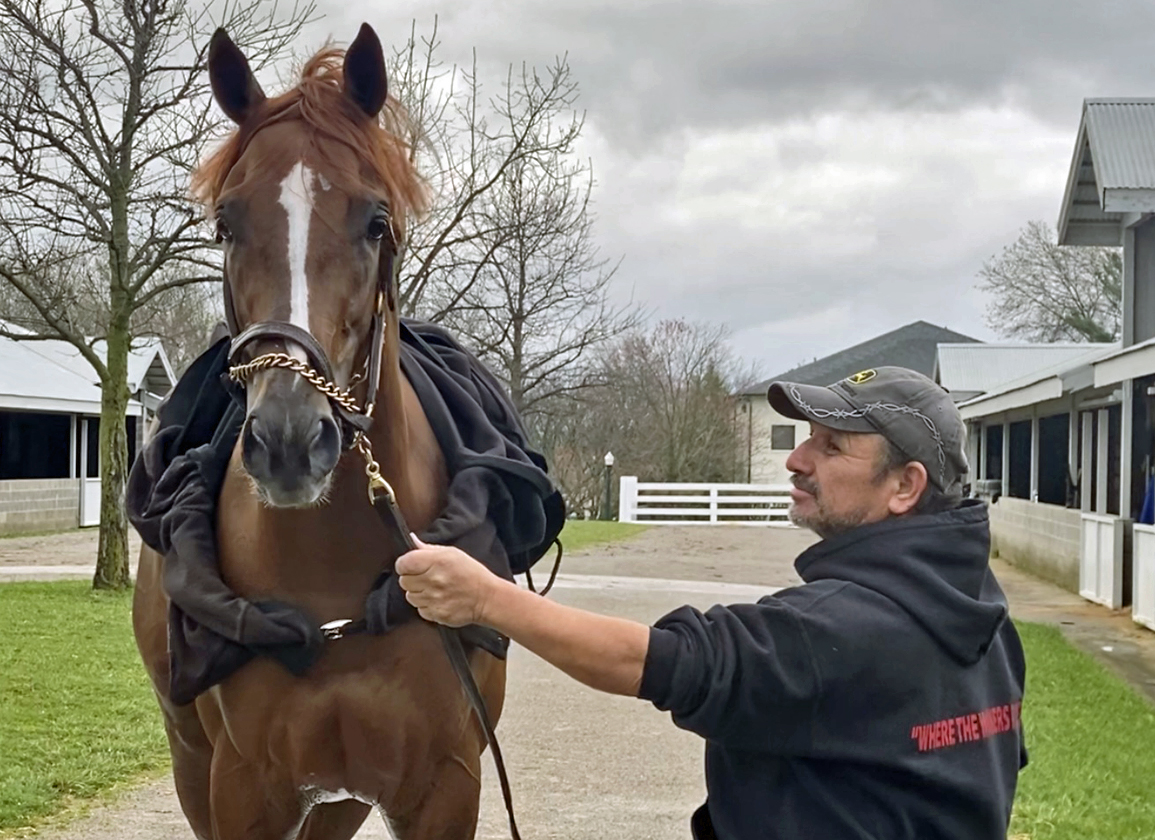 The GIII Stonestreet Lexington S. offers the last round of qualifying points for the GI Kentucky Derby on May 7 and the connections of GII Fasig-Tipton Fountain of Youth runner-up In Due Time (Not This Time) are still Derby dreaming.

Their 3-year-old chestnut colt has never been off the board in his four career starts and has already earned 20 qualifying points from his second-place finish in the Fountain of Youth. He would still need the 20 points awarded to the Lexington S. winner in order to get a chance at seeing the Kentucky Derby starting gate, but trainer Kelly Breen is confident going into Saturday's race.

“We've had some not-so-great weather here at Keeneland, but he has adapted well,” Breen said. “Last week he breezed at Keeneland over a track labeled muddy. It wasn't the fastest of workouts, it was just a maintenance, but since he's been here he has been doing well.”

With Paco Lopez aboard, In Due Time drew post two in a field of 11 entered in the 1 1/16-mile contest.

“We'll leave it up to Paco,” Breen said when asked how he would like to see the race to play out. “Ideally I'd like to see him forwardly placed because if we ask him for speed, I think he will have the speed. I'd rather not see him get trapped in, but he ran well in a race where he came from off the pace and stayed on the rail saving ground. Whatever it's going to be, we're in Paco's hands.”

In Due Time was a $95,000 2-year-old purchase for Edge Racing, a spinoff of MyRacehorse designed to replicate a more traditional racing partnership. Edge Racing's Joe Moran and Nick Hines picked out the colt at the 2021 OBS April Sale after their partnership enjoyed success that same year with another son of Not This Time, Yes This Time.

“Yes this Time was Edge Racing's second purchase overall, so we had a little bit of comfort there in going with another Not This Time,” Moran explained. “In Due Time just looked like an athlete to us and we got him at an affordable price.”

In Due Time was sent to Breen's barn at Monmouth Park where he was stabled next to none other than Yes This Time.

“They were two peas in a pod,” Breen said. “They were both just happy to be around.”

Yes This Time won the GIII Kent S. at Delaware Park in July and just a few weeks later, In Due Time broke his maiden on debut.

Breen opted to give the colt time off after the win and he resurfaced at Gulfstream in January. He ran third coming off the layoff in a six-furlong allowance, but flourished when given added distance in his next start going a mile, traveling from mid-pack to get the win by almost six lengths.

“He is a horse that thrives for a little bit more distance,” Breen explained. “It was only a one-turn mile, but he showed his ability to relax and rate and he had a pretty good punch.”

The flashy win caught the eye of several more racing partnerships and before the colt's next start, Medallion Racing and Parkland Thoroughbreds had also joined in the ownership.

In Due Time finished second in an eventful GII Fountain of Youth, where his rider Paco Lopez was later suspended for 14 days for careless riding after In Due Time shifted out in the stretch and two jockeys were unseated from their mounts. Breen chose to give his trainee additional recovery time after seeing how the colt came out of the Derby prep.

“It was the first time where I saw that he was a little tired,” Breen said. “He did bounce back within 48 hours, but he's a very on, sort of motivated horse and he was a little knocked out after the race. I know if we were to run well in the Lexington that it's only three weeks until the Derby, but the extended time that he had in between his last race and this race is going to help him perform better.”

In Due Time will be well-supported on Saturday with 25 owners, along with their friends and family, cheering him on at Keeneland.

“We have people coming in from California, Florida, New York and Chicago so it's really cool to see all these people meet up all due to one horse,” Moran said. “Any time we get to compete in these big races–and fingers crossed a win could get us in the Derby– there's nothing more fun than that and to celebrate with more people is even better.”

Perhaps as an added bit of luck, Edge Racing has a second starter at Keeneland this weekend. Escape Route (Hard Spun) was the partnership's first purchase in 2020 and ships in from California to run in the finale on Saturday's card.

Edge Racing was launched in November of 2020 with the goal providing a more in-depth experience for owners buying into a larger ownership stake.

“Edge Racing is more like your traditional syndicate,” Moran explained. “95% of our owners started with MyRacehorse and it's cool to see them take that next step forward. This is our first journey on the Derby trail and it's exciting to be able to do it after such a short period of time.”

Kelly Breen is no stranger to the Triple Crown trail, with his top runners including 2011 GI Belmont S. winner Ruler on Ice (Roman Ruler) and 2011 Kentucky Derby contender and MGSW Pants on Fire (Jump Start), but he can't hide his excitement at the prospect of another Kentucky Derby starter.

“It's been a few years since I have been back,” he admitted. “My kids have never asked about races before, but they are asking if we are we going to the Derby this year. There is nothing here in Kentucky like the Kentucky Derby. Regardless of if we make it to the Derby or not, I believe that he's a nice horse and we'd like to have some fun with him and run in some nice races.”