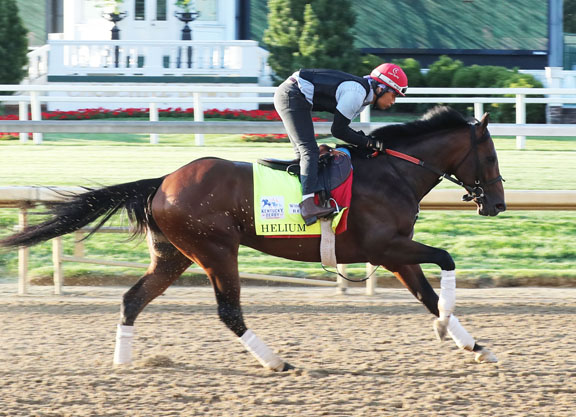 In an industry steeped in history, the post position draw seems to be the most antiquated process. This system for post position selection is basically a mini lottery conducted by a pair of racing officials. One person randomly selects an entry page while the other pulls a numbered ball out of a bottle which represents a horse's post position.

Imagine having a horse who has jumped through all the hoops–won or placed in a major prep race, traveled around the countryside, stayed sound and healthy all year long–earning a spot as one of the top 20 3-year-olds in the country, only to find out that your position in the starting gate is determined by a random draw of marbles.

That's what was going through my brain as I sat nervously on my couch, praying against certain numbers when my horse's name was announced. So, it was a complete relief when the number 12 was pulled, and Helium (Ironicus)'s name was revealed. Granted, since the advent of the new starting gate, having an inside post is not as detrimental as in previous years. My understanding is that there will be almost 15 feet of room between the immediate inside post and the inner rail.

Recent history has shown that an outside post is not as bad as it used to be since there is such a long distance before reaching the first turn. Winners from outside posts include:

That being said, I am personally more comfortable having our horse in the middle of the starting gate.

The Kentucky Derby is arguably the most important and well-known race in our sport. As an industry we recognized its lofty stature by establishing a dedicated point system to ensure that the top contenders have a verifiable route to entry.

Therefore, shouldn't we give additional value to those points by offering the top point earner the first post position pick? For 2021, Essential Quality (Tapit)'s connections would have earned the opportunity to pick any of the 20 posts. Maybe they would have selected post 14 anyway, but it would add an extra layer of strategy and intrigue to the post position selection process. I cannot speak for the connections of Known Agenda (Curlin), but I am fairly sure they would not have selected post 1 with the fifth overall pick that they would have merited by earning 102 overall points.

Most years require a minimum of 26 points to earn a place in the starting gate, which is basically the equivalent of placing in one of the preps as a 3-year-old. We appreciated knowing the point values of the scheduled races to ensure our potential Derby entry. When we won the 40-point GII Tampa Bay Derby, we determined that we had earned enough points to qualify for the Kentucky Derby and opted not to run Helium again.

But if an increased point total would have granted us an opportunity to improve our post position selection, we certainly would have had additional conversations about running in another prep race.

After I spoke to our trainer Mark Casse and my parents about the post position, I reviewed the official field in its entirety. I looked at all the horses in the race, their post positions, jockeys, trainers and odds. Number 12–HELIUM–owner D.J. Stable. That was the moment when the reality of running in the 147th Kentucky Derby resonated with me. “Holy crap,” I uttered to myself (only I didn't say crap). We're only a few days away from realizing a dream that has been in the making for almost 40 years.

Jon Green is the General Manager of D.J. Stables and a co-host of the TDN Writers' Room podcast. He is writing a daily diary about his first Kentucky Derby experience as an owner.