Derby Diary: A Lifetime of a Chance 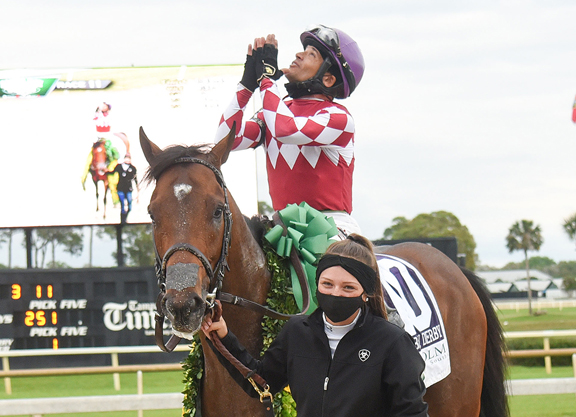 Being a Certified Financial Advisor, and the son of a CPA, I follow trends and calculate odds constantly. You can say it is in my blood to rationally analyze a set of variables and predict a logical outcome.

When the Kentucky Derby entries were announced, it was no surprise mathematically that those horses represented such a small amount of the overall foal crop. The 20 horses who line up in this Saturday's starting gate represent approximately 1/10 1% of the registered foals born in 2018 (20 of 19,925).

Basically, the odds of winning the Kentucky Derby is equivalent to:

Knowing the odds are EXTREMELY stacked against us to even have a Derby starter, why do I feel so emotional heading into this weekend's race? Part of the reason for the uneasy feelings are the odds themselves–the sheer unlikeness of having an undefeated starter in the Kentucky Derby is overwhelming. Add into the equation the fact that my family has been in the business for about 40 years, started in over 14,000 races, won roughly 2,300 times, and competed at about 25 different racetracks nationwide makes this pending opportunity a long time coming.

We have lost races because the jockey went too fast or too slow, didn't listen to the pre-race instructions, should have ignored those instructions because the race fell apart, got boxed in or “just wasn't feeling it.” Our horses have not liked the surface or the distance, engaged in a speed duel, broke through the gate, got left at the gate, washed out in the paddock, lost a shoe, didn't like dirt in its face, didn't like being pinned to the rail, went too wide, got bothered or intimidated by another horse, needed to be gelded, was “horsing,” was in too tough, didn't ship well, needed blinkers, needed to have the blinkers cut back or removed, needed the race, speed wasn't holding (if you had a front runner), couldn't run down the speed (if you had a closer), didn't see the winner passing him until it was too late, got to the front and stopped, bled, had a temperature, was popping an abscess, didn't like running at night, and my favorite-bolted away from its own shadow. I am confident that I am forgetting some excuses, but you get my point.

The good news is that all of the above horses galloped out well after the wire.

So, when you have a horse who has overcome all of those possible conditions, and still remains undefeated, you get a little excited. Because despite the odds (and racing gods) being against you, here we stand a few days away from fulfilling a dream that has been 40 years in the making.

I look forward to chronicling the events of this week with you and appreciate your support for our horse Helium (Ironicus).

Jon Green is the General Manager of DJ Stables and a co-host of the TDN Writers' Room podcast. He is writing a daily diary about his first Kentucky Derby experience as an owner.