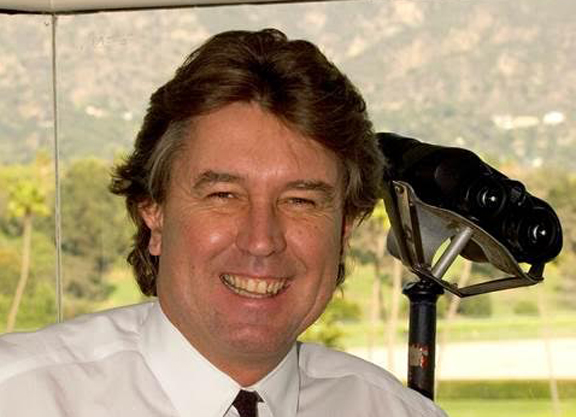 Trevor Denman, the popular voice of Santa Anita Park since 1983, will retire from 'The Great Race Place' and will not return for the upcoming 2015-16 race meet that begins Dec. 26, it was announced Friday. He will, however, return for the 2016 summer stand at Del Mar.

“After calling the races for 44 years, 33 at Santa Anita, I have come to the decision that it is time for me to kick-back, relax and enjoy the rest of my life on my farm in Minnesota and do some traveling both throughout American and overseas,” the 63-year-old native of South Africa said. “It is time to stop counting dollars and to start counting the stars. I want to thank all the fans who have been so very supportive of me over the years. People do not realize how rewarding it is when a stranger walks up to you and compliments you on your work. It is so uplifting! Once again, a very big thank you to all the wonderful Santa Anita fans. You made my life at Santa Anita an absolute pleasure.”

Added Denman, “I can honestly say that I have nothing but fantastic memories. The best of the best! I have been lucky enough to have had the most harmonious relationship with management at Santa Anita from the very first day I walked onto the job. I have always felt relaxed in my work environment and have always had what I feel has been the best relationship any employee could have with their employer–and it's been that way for 33 years! I wish Santa Anita all the very best in the future.”

Keith Brackpool, chairman of Santa Anita Park, added, “We knew this situation would come one day, but we were selfishly hoping it would be many years down the line.”

“We have had the privilege of listening to the best-of-the-best for 33 years. No one paints the portrait of race like Trevor Denman. We would like to thank Trevor for changing the way America listens to races.”

Denman's involvement with horse racing began at the young age of six and he called two races at Santa Anita in January of 1983, prior to being hired as the full-time announcer for Oak Tree at Santa Anita during the fall of that year. Officially the full-time Santa Anita announcer for the 1984-85 season when Dave Johnson left to pursue other interests, Denman said his “best moment in horse racing history, in his career at least” through 2012, was subsequent Horse of the Year Zenyatta (Street Cry {Ire})'s victory in the 2009 GI Breeders' Cup Classic at Santa Anita. Denman also developed several trademark phrases during his tenure in Arcadia like “And away they go…,” along with “They would need to sprout wings…” and “Looks like he just jumped in at the quarter pole.”

“Santa Anita has been my home for 33 years,” said Denman, who also is an avid student of great authors and philosophers. “I've so enjoyed working with everyone there through the years, including a great last three with Keith. Along with great racing, we share a love of soccer and our friendship will certainly continue for years to come.”

“We are not going to replace an icon of three decades in less than three weeks, nor are we going to try,” said Joe Morris, SVP West Coast Operations for the Stronach Group. “Santa Anita will undertake a world-wide search to find the next voice of 'The Great Race Place' for the next generation. In the meantime, we are extremely fortunate to have two exceptional race callers available to us in Michael Wrona, who is a member of the Stronach Group family through his years at Golden Gate Fields, and Frank Mirahmadi, who has done a great job of subbing for Trevor during the last two seasons. While it is possible that the right candidate ultimately might indeed be Michael or Frank, we owe it to our fans to find the perfect person, whomever and wherever they may be.”

Concluded Denman, “I want to quote one of my heroes, Epicurus, for this most appropriate saying at this time of my life. 'Man should avoid the fevered competition of the city. Only with leisure can life flow in a single gentle stream. He should seek the calm of the countryside to find his deepest happiness and tranquility of body and mind. There he will find the greatest of all goods, which is peace.”

Click here to view a 2012 Q & A with Trevor Denman by the TDN's Steve Sherack.