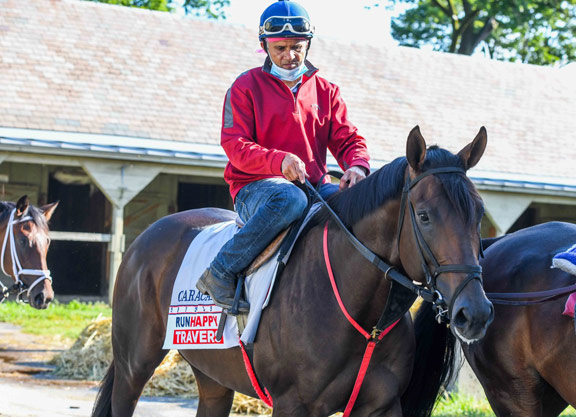 Though the Travers is often the late-August goal for the owners and trainers of talented 3-year-olds, the COVID-19 pandemic has produced a serious rewrite of the schedule for elite races and briefly changed its status. Long ago dubbed the “Midsummer Derby,” the 2020 Travers at Saratoga Race Course is a stepping stone to the GI Kentucky Derby Sept. 5.

In their quest for Derby points, trainer Gustavo Delgado and his son and assistant Gustavo Delgado, Jr. shipped lightly raced Caracaro to Saratoga Race Course last month. Caracaro earned 20 points with his narrow second-place finish to Country Grammer (Tonalist) in the GIII Peter Pan S. on opening day, July 16. Those Peter Pan points have him in 25th place, close, but still outside the safety zone to secure one of the 20 berths. The Travers, with 100-40-20-10 points available, is their last chance.

“We're thinking about qualifying for the Derby,” Delgado, Jr. said. “If he runs in the top three and he comes out good, hopefully we will make the Derby.

Caracaro is making his fourth career start for co-owners Global Thoroughbred and Top Racing and drew post seven in the eight-horse Travers. He will be ridden by Javier Castellano, who holds a record six victories in this event.

Delgado, a hugely successful trainer in his native Venezuela, laughed as he said that the colt–who was injured after his maiden victory Jan. 11 and had six months between starts this year–might make it to the Derby after all.

Delgado, Jr. stepped in and translated the rest of his father's words: “I would say that the only good thing about the virus is that we have a shot in the Derby again.”

If Caracaro delivers a big performance in the 151st Travers, he would take the Delgados to their third Derby. Since emigrating from Venezuela in 2014 and opening a stable in Florida, they have had Majesto (Tiznow), 18th in 2016, and Bodexpress (Bodemeister), 13th last year. Delgado, Jr. said they did everything to get to Louisville with Majesto and Bodexpress.

“There is no comparison to this horse,” Delgado Jr. said. “This horse is way more talented than the last two.”

Caracaro showed that ability in his six-length win in the one-mile maiden score at Gulfstream, the second start of his career. The performance made him a Derby prospect and Rafael Celis of Global Thoroughbreds and his partner Lucas Noriego, who competes as Top Racing, had offers to buy the colt. During the vetting process, he was found to have a bone issue in is hind end that scuttled the sale. Caracaro did not need surgery, but required a three-month layoff.

Caracaro stayed with the Delgados at Gulstream Park West and returned to light training after his three-month hiatus. He had five breezes before making the trek to Saratoga to try to earn his way into the Derby. He moved to the lead of the Peter Pan in the stretch, but was collared by Country Grammer and lost by a neck. Delgado said he would have skipped the Travers if Caracaro had won the 1 1/8 miles Peter Pan and earned 50 points.

Delgado, Jr. picked up the translation for his father: “Normally, we would like to have more time between races, but right now we don't have any more options.”

After the Peter Pan, Celis and Noriega–who also are partners in Bodexpress–heard from interested buyers, but they have retained ownership.

This weekend Caracaro will try again in the Travers, first run in 1864 and the marquee event of the Saratoga season. It was moved ahead a few weeks from its usual spot in late August to make it a Derby prep. This will be the earliest running of the race since 1916.

“We are here. The horse really likes the track,” Delgado, Jr. said. “He ran second and he ran a helluva race. The Travers is close to the Derby, but it will be hard for us telling the owners we don't want to run in the Travers. Javier Castellano is open for us and the horse is doing good. So, a lot is going on from the owner's standpoint. Everybody wants to try. If you have the horse now. It's not like you are going to save time and see and then something happens after. You have the horse now and the horse is doing good now.”

Though his work tab shows two breezes since the Peter Pan, Delgado said he really could not work Caracaro between races.

“Everything is good. No problem,” he said. “He has only been galloping because he only had three weeks. It was six months, no races. Now it's very difficult. We considered only galloping, to the Travers. It's possible that we have good luck.”

The Delgados said they think the mile and a quarter distance of the Travers will suit their colt.