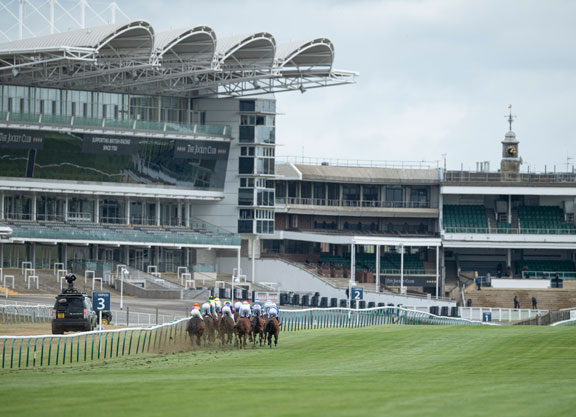 Racing at a vacant Rowley Mile in June | racingfotos.com

The return of spectators to British sporting events has been put on hold due to a rise in COVID-19 cases in the country, a development that racing’s tripartite leadership bodies described as “a serious blow to the horseracing industry and to the people and communities who depend upon it for their living.” Prime Minister Boris Johnson indicated the hold could last “perhaps six months.”

Warwick Racecourse hosted 500 spectators for its jumps meeting on Monday, and it was the second time a British racecourse has had fans since racing resumed on June 1; Doncaster had a small crowd on the first day of its St Leger meeting, but their plans to have fans for the remainder of the festival were aborted by authorities due to rising COVID-19 cases. Newmarket had planned to host around 1,000 spectators daily at its Cambridgeshire meeting later this week, but those plans have now been scrapped.

Speaking in the House of Commons at lunchtime on Tuesday, the prime minister said, “We have to acknowledge that the spread of the virus is now affecting our ability to reopen business conferences, exhibitions and large sporting events, so we will not be able to do this from Oct. 1 and I recognise the implications for our sports clubs which are the life and soul of our communities.

“We will spare no effort in developing vaccines, treatments, new forms of mass-testing, but unless we palpably make progress we should assume that the restrictions that I have announced will remain in place for perhaps six months. For the time being, this virus is a fact of our lives and I must tell the House and the country that our fight against it will continue.”

The tripartite leadership bodies-the British Horseracing Authority, the Horsemen’s Group and the Racecourse Association issued a joint statement on Tuesday that read, “Our sport has worked hard with public health officials to return safely and carry out pilot events. The exemplary response from the spectators in following the measures we put in place has shown that organised events can be run safely. We look forward to a full evaluation of the pilots and for the evidence to be used to inform future decisions about sporting events.

“Despite all those efforts, our industry is now facing a severe threat. We are the second-most attended spectator sport in the country. Without the millions of people who normally enjoy a day at the races, many people’s jobs are at serious risk, as are the businesses they work in. We know this is recognised from the regular discussions we have had with ministers and we thank them for their strong support in these difficult times. We have kept the UK, Scottish and Welsh governments updated on the financial impact of COVID and the effects on the rural economies in which so many of our racing staff live and work. We have told the UK government our racecourses were facing a loss of £250 to £300 million of revenues this year, which in turn means less prize money flowing through to our participants and our owners. We will be conducting a further economic impact assessment and will work with government to put in place financial assistance to protect livelihoods and rural communities. We were pleased to hear the Prime Minister say that the chancellor and the culture secretary are working urgently to do what they can to support our sector. The Chief Executive of the British Horseracing Authority, Nick Rust, will attend a meeting with the Culture Secretary this afternoon.

We have worked closely with the betting industry during our safe return from lockdown. Responsible betting is part of the fun of racing. It benefits both industries, flowing back into racing to create jobs and fund the care of horses. But British racing does not benefit to the extent of our European counterparts for structural reasons. We have seen growing signs that our best horses are being lured elsewhere by the promise of greater financial rewards. We believe the case for urgent reform has been made. This will be part of the assessment we share with government.

Rust said, “Racing’s leaders are responding to this crisis by working together like never before. We are working to a recovery plan, but today’s announcement will set back our progress. We will urge the government to provide financial support, as they have indicated they are considering, and to accept the case for urgent reform of the Levy.

“Our loyal owners and our key international investors have stood by us and we ask government to work with us to maintain that confidence in racing and in Britain.”

David Armstrong, chief executive of the RCA, added, “the news that all elite sporting pilot events are to be postponed is incredibly disappointing. The sport has worked tirelessly to develop protocols to allow spectators to safely enjoy a day’s racing and early indications from our pilot events are that these were a success. All sports are suffering from the effect of zero admissions income and racing is no different. It is imperative that discussions continue with government to highlight the economic impact of this decision. My thoughts are with Amy Starkey and the team at Newmarket–this news will be difficult to take following weeks of work to prepare the site for customers.”