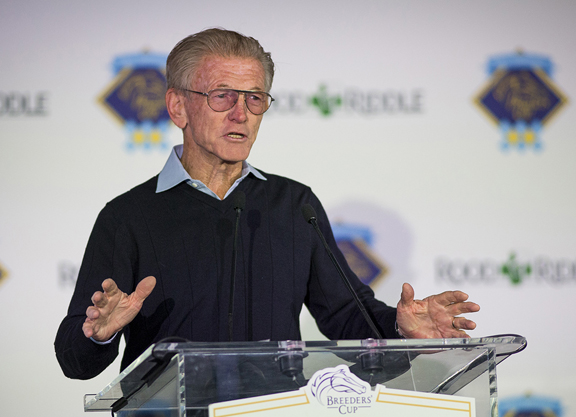 The Del Mar summer meet, always a hot attraction in Southern California, could not have gone much better this year. The stand set records for average daily handle and average field size, and crucially, recorded zero racing or training fatalities, the fourth stakes Del Mar meet with no racing breakdowns. Tuesday, Del Mar CEO Joe Harper joined the TDN Writers' Room presented by Keeneland as the Green Group Guest of the Week to talk about how the track has become the gold standard for racehorse safety, what the future looks like for Del Mar, his childhood acting career and more.

“We spent $5 million putting in a new surface,” Harper said when asked what the keys have been to eliminating breakdowns. “It's kind of like picking up a carpet and shaking it out and putting it back down again. We re-banked the turns, and I think the main thing was just keeping our eye on these horses in the morning as well as when [trainers] put in stall applications. I want to know where they've been, how long the layoffs have been, why there were layoffs, take a look at vet records, and then when they get here, we put a lot of eyes on them. We hired a number of veterinarians to watch morning workouts, and they're really good. They know every horse on the grounds. They know the trainers. So if they see something a little off, they call the trainer and say they're going to come by the barn and take a look at this horse. I think it took a while for the change of culture to sink in. There's a little bit of, [when horsemen say] 'I think we've got one more race left in this horse', saying to them, 'I think it's time to retire them.' It was great getting that change of culture and the horsemen to accept the fact that we all had to do something. And it worked. It worked the first year, and it's been working a bit better every year.”