Deirdre To Visit Galileo In 2021 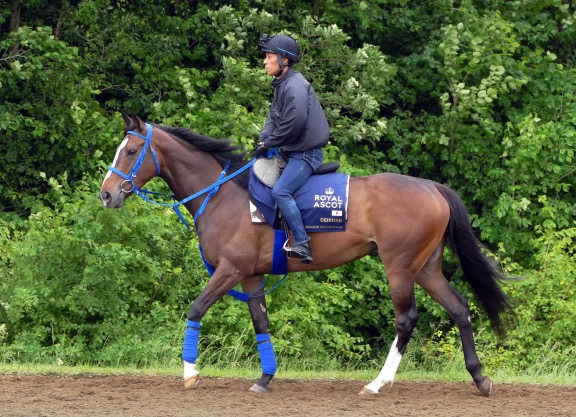 A new direction in the extraordinary odyssey of the Japanese mare Deirdre (Jpn) (Harbinger {GB}-Reizend {Jpn, by Special Week {Jpn}) began on Monday when the 6-year-old left her adopted home of Newmarket to begin her stud career in Ireland. Her first mating is planned to be with Coolmore's champion sire Galileo (Ire).

Bred by Northern Farm and raced by Toji Morita, Deirdre's first three seasons of racing were restricted largely to Japan, where she won five races, including the G1 Shuka Sho. She also took third in the G1 Dubai Turf on her first start outside her native country. Following her return visit to the Dubai World Cup meeting in 2019, Deirdre travelled on to Hong Kong and then to Newmarket, which has subsequently remained her base for an ambitious international campaign.

On her second start in Britain she became the first Japanese-trained horse to win a Group 1 contest in Europe when triumphing in the Nassau S. at Goodwood. Since then, she has run in Ireland, Saudi Arabia, France and, finally, Bahrain last month.

Yoshi Hashida, whose father Mitsuru has trained Deirdre throughout her career, told TDN, “She is going to the next phase but the moments we spent in Newmarket and around the world will be the memories we cherish forever. She will visit Galileo and probably stay in Ireland for two or three years before returning to Japan.”

Throughout her lengthy stay in England at Abington Place, Deirdre has been accompanied by her daily rider Yuta Komiyama, who has become as well known on Newmarket Heath as his famous mount.