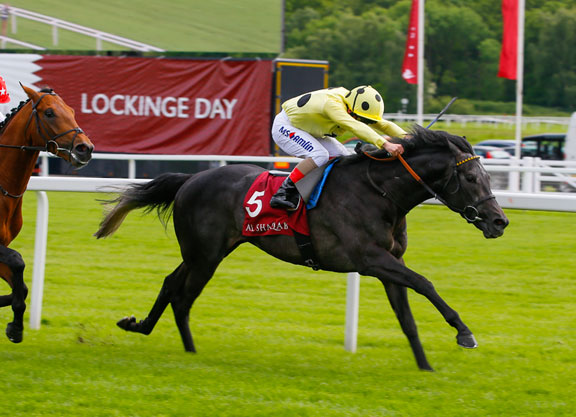 One of the main focuses of attention for the last year’s G1 St Leger, Sheikh Mohammed Obaid Al Maktoum’s Defoe (Ire) (Dalakhani {Ire}) was only 10th there but connections are keen to wipe the slate clean and begin again in Newbury’s G3 John Porter S. on Saturday. Having taken the 11-furlong Listed Glasgow S. at Hamilton in July and G3 Geoffrey Freer S. over an extended 13 furlongs here the following month, he was on a roll until his momentum abruptly halted in that Doncaster Classic. “He’s been working well and he loves the track,” trainer Roger Varian said. “I’m sure there will still be a bit of give underfoot and he’d appreciate that.” The Queen’s Call To Mind (GB) (Galileo {Ire}) was third to Defoe in the Glasgow before winning the Listed March S. at Goodwood in August and finishing a short-neck second to the subsequent G1 Prix Royal-Oak hero Ice Breeze (GB) (Nayef) in the G2 Prix Chaudenay at Chantilly in September. Trainer William Haggas said, “He’s fine and ready to go. The ground should be fine for him and this looks a good place to start. We’ve been pleased with how he’s wintered. He’s grown up a lot. He’s a horse who stays well and we’ve looked after him as a young horse, so hopefully that will come to fruition this season.”