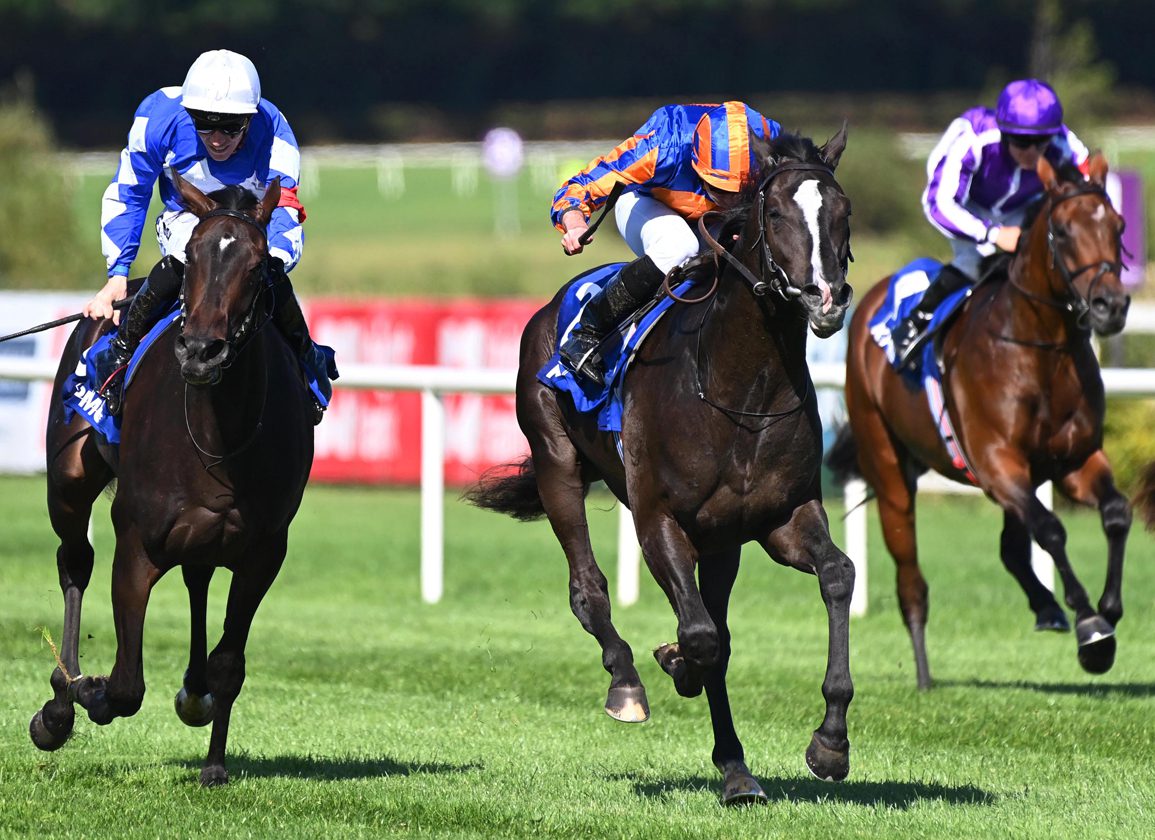 The vibes were strong about Ballydoyle's TDN Rising Star Auguste Rodin (Ire) (Deep Impact {Jpn}) ahead of Saturday's G2 KPMG Champions Juvenile S. at Leopardstown and they proved correct as the son of Rhododendron (Ire) (Galileo {Ire}) got his stable off to a strong start to Irish Champions Weekend. Fine-tuned since breaking his maiden over seven furlongs at Naas July 2, the 11-10 favourite was settled by Ryan Moore behind the leading pair early which included his stablemate and fellow TDN Rising Star Tower Of London (Ire) (Galileo {Ire}). Sent to the front with 1 1/2 furlongs of the mile trip remaining, the bay edged right with the smooth-travelling filly Caroline Street (No Nay Never) in attendance but ultimately had the answers to score by 1 1/2 lengths.

“He's a lovely horse and was a bit idle on ground that is probably a bit slow for him,” the winning rider said of the winner, who had looked unlucky when second on debut at The Curragh June 26. Aidan O'Brien had given the impression beforehand that Auguste Rodin has been sending out the right signals at Rosegreen and said, “He's just back off his break and will come forward plenty from it. He is a horse who probably doesn't want to be in front too long, but his mum was like that, she liked to be getting there late but that's a good thing as those horses tend to last longer. He always showed a lot of pace in his work and he's a good traveller, a lovely mover and will appreciate nice ground when he gets it.”

“He has a beautiful physique and a good nature and always went through his work very impressively,” he added. “To get a horse like him by Deep Impact out of a Galileo champion mare is incredible really. He could be a Futurity Trophy or a Dewhurst horse, he has plenty of class and quality and will probably sharpen up a lot from the race. We thought he could be the type of horse who could do both the Guineas and Derby, he could be a Derby horse that could start in the Guineas. He could get a mile and a half, but he's a mile, mile-and-a-quarter horse we thought.”

Of Tower Of London, who faded in midstraight and finished a disappointing last, O'Brien added, “At home he knew more than the other horse and ideally, we would have preferred to take our time a little bit more with the other horse but there was no pace. Something had to go and it probably didn't really suit him doing that.”

Auguste Rodin, who becomes the 151st group winner for his legendary late sire, is so far the only known foal out of the leading racemare Rhododendron who was able to win a Lockinge at a mile and the Prix de l'Opera over 10 furlongs, as well as finish second to Enable (GB) (Nathaniel {Ire}) in the Oaks. Her dam is the outstanding producer Halfway To Heaven (Ire) (Pivotal {GB}), who also captured a trio of top-level contests from a mile to a mile and a quarter including the Irish 1000 Guineas. Rhododendron's full-sister Magical (Ire) was a seven-times group 1 winner, with her conquests featuring the feature race on this card and Ascot's Champion S.

Auguste Rodin (Deep Impact) is bred to be a star and is now a Group 2 winner, landing the KPMG Champions Juvenile Stakes for Ryan Moore and Aidan O'Brien #LICW22 @LeopardstownRC | pic.twitter.com/gMkfrei0kP