Deep Impact Yearlings In The Spotlight 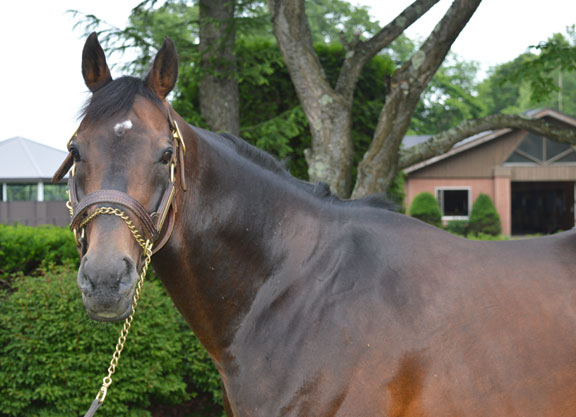 The foal session of the JRHA Select Sale is normally the headline-grabber, but the presence of four yearlings from the final crop of the late, great Deep Impact (Jpn) during Monday's opening session could just steal the show during the two-day sale in Hokkaido.

Deep Impact, the Triple Crown winner and breed-shaping sire, died on July 29, 2019, having missed much of the preceding covering season with the spinal issues that ultimately took his life. His small final crop was expected to contain around 20 foals, four of which will go under the hammer this week and will, in fact, bookend Monday's yearling session. They are lot 1, a colt out of GII Gulfstream Park Oaks and GII Black-Eyed Susan S. winner Go Maggie Go (Ghostzapper); lot 52, a filly out of GI Beverly D. S. winner Watsdachances (Ire) (Diamond Green {Fr}); 130, a filly out of the four-time winner Jewel Maker (Jpn) (Empire Maker); and lot 248, a colt out of champion and three-time Group 1 winner Sweep Tosho (Jpn) (End Sweep), who has produced seven winners from seven runners.

At the first renewal of Japan's market-leading sale following Deep Impact's death last summer, buyers were keen to get their hands on some of his last progeny and indeed he was responsible for the top six yearlings by price and twice during the session his progeny set a new record for high price for a yearling at the sale, topped by a half-brother to GI Kentucky Oaks winner Cathryn Sophia (Street Boss) who fetched ¥510-million (£3.77m/€4.19m/$4.75m) from Tetsuhide Kunimoto.

Deep Impact has continued to posthumously justify those buyers' confidence in the 12 months since the 2020 Select Sale; he earned his eighth consecutive champion sire title in 2020, his leading light being Contrail (Jpn), who was his third straight G1 Tokyo Yushun (Japanese Derby) winner-and sixth overall–and emulated his sire by winning the Japanese Triple Crown. For good measure, Shahryar (Jpn) continued the Deep Impact Tokyo Yushun procession this year.

The JRHA Select Sale will, of course, not be all about Deep Impact; leading local sires like Epiphaneia (Jpn), Heart's Cry (Jpn) and Lord Kanaloa (Jpn) are well represented. With the death of Deep Impact and King Kamehameha in 2019 and the more recent retirement of Heart's Cry, Japanese stud masters have made a significant investment in stallion prospects the past few years and those represented by members of their first-crop weanlings or yearlings here include American Horse of the Year Bricks and Mortar; G1 Japan Cup winner Cheval Grand (Jpn); champion 3-year-old Satono Diamond (Jpn); multiple Grade/Group 1-winning sprinter Mind Your Biscuits; Deep Impact's G1 2000 Guineas winner Saxon Warrior (Jpn); and the Japanese-bred, American Grade I winner Yoshida (Jpn), who himself graduated from this sale. The catalogue also includes some of the first Japanese-bred progeny of GI Kentucky Derby winner California Chrome, and second- and third-crop progeny of American champion sprinter Drefong, who has his first runners this year.

The yearling session of the JRHA Select Sale begins at 10 a.m. local time on Monday, with the foal session following at the same time on Tuesday.