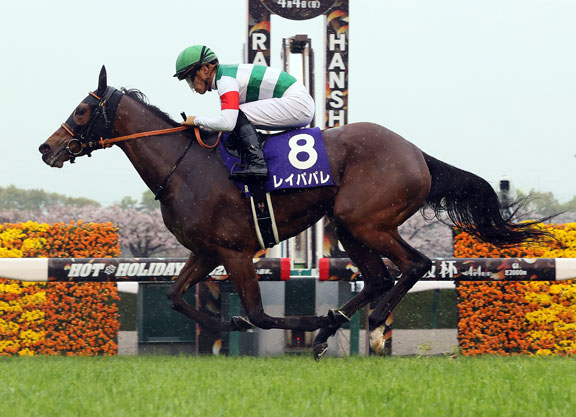 Sent off as the fourth choice at 11-1, the bay was a touch slowly away, but soon skipped up to the head of the field and shouldered pacesetting duties. Allowed to bowl along as the rain continued, the 4-year-old filly covered an opening quarter in :23.50 and her half-mile split of :47.70 saw her still on an uncontested lead. She traveled 1200 metres in 1:12.60 and was still moving smoothly after a mile in 1:36.90. Steered off the fence for the stretch drive, Lei Papale displayed another gear and quickly scampered away from her rivals, none of whom appeared more than workmanlike on the soft ground with the exception of the rallying Mozu Bello (Jpn) (Deep Brillante {Jpn}), who flashed home for second.

The 4-5 favourite, Contrail settled in midpack while tracking 9-5 second choice and 2020 Japanese Champion Sprinter/Miler Gran Alegria (Jpn) (Deep Impact {Jpn}) for much of the contest. He began to improve on the backstretch and drew close to Gran Alegria with less than a half-mile remaining, as that pair moved in tandem and appeared poised to pounce on the winner. However their bids flattened out a bit late on, with Contrail three-parts of a length behind Mozu Bella and a neck to the good of Gran Alegria.

“I had always believed in her outstanding talent since her debut but of course it was a tough ask this time against a top class [field] after registering out first group-race victory [in December],” said pilot Yuga Kawada, who was winning his 17th JRA Group 1. “She felt good during the post parade and she was able to jump into her rhythm throughout the race without being pressed. I was able to shift her out without interfering the horses coming from behind for her stretch run as there was still plenty room between her and the rest of the field at the top of the stretch. And to still have the strength to find another gear over the turf condition today—she is an exceptional filly to keep her speed right to the end. Now that she's a Group 1 winner, expectations will suddenly be quite high from now on, but I hope to be able bring out her best in each race.”

Lei Papale did not make her racecourse debut until January of her 3-year-old season, but she handled a one-mile newcomer race at Kyoto, before returning on June 6 and taking a Hanshin affaire over the same distance. Upped to 1800 metres at Niigata in July, the bay continued to find the winner's circle, and back at Kyoto, the good-ground Ohara S. went her way on Oct. 18. Tried for the first time at the group level and going 2000 metres, the filly duly saluted in the Dec. 5 G3 Challenge Cup at Hanshin, her final start as a sophomore. The Osaka Hai was the first time she was tested over a soft turf course.

The late Deep Impact's stakes winners stand at 172, with 138 group winners and Lei Papale's Osaka Hai victory brings his total of Group 1 winners to 48. Lei Papale is the third Group 1 winner for her broodmare sire Kurofune (Jpn) and first by Deep Impact. Although, the Deep Impact/Kurofune cross has already resulted in the winner's full-sister MGSW Shining Lei (Jpn), Japanese Group 3 hero Staphanos (Jpn), who placed five times at the highest level and two other group winners.

Shells Lei ran second in a pair of listed stakes at three and retired as a three-time winner. Bred exclusively with Deep Impact for her first four foals, the quartet of winners yielded G2 Hopeful S. and G3 CBC Sho winner Shining Lei as the best of them until Lei Papale, foal number eight and part of an octet of winners from nine to run. She has had fillies by Duramente (Jpn) and Daiwa Major (Jpn) in 2019 and 2020, and was covered by Real Impact (Jpn) last spring.