Decorated Knight Another For Galileo In the Irish Champion 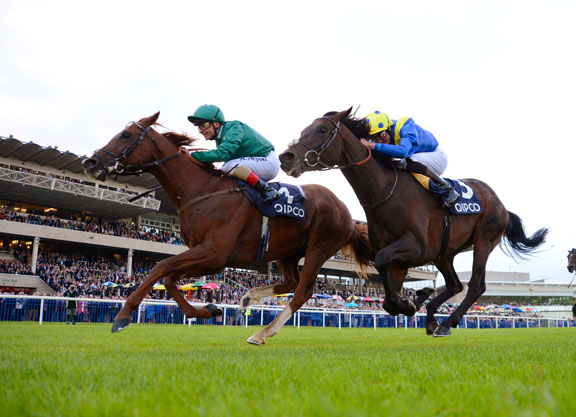 On what turned out to be a night of upsets, Saleh Al Homaizi and Imad Al Sagar's Decorated Knight (GB) (Galileo {Ire}) swooped late to lead home a British-trained one-two-three in the G1 QIPCO Irish Champion S. at Leopardstown at a huge 25-1. Scorned by those odds despite having already been successful in the top flight in this country's Tattersalls Gold Cup, Andrea Atzeni had nothing to lose and switched him off in last as Frankie Dettori allowed Eminent (Ire) (Frankel {GB}) his head up front. Surging out wide, Decorated Knight got to the lead with 100 yards remaining and had that bit more speed than his compatriot Poet's Word (Ire) (Poet's Voice {GB}) to win by a half length, with 1 3/4 lengths back to the game Eminent in third. Churchill (Ire) (Galileo {Ire}) was strongly supported again, but the 8-11 favourite could never land a blow on the inside and ended up seventh. “He had a bad draw and we thought the ground would be too soft for him, but I put him to sleep and he picked up so well,” the winning rider said. “He looked a different horse in the paddock and relaxed really nicely, but to be honest I didn't expect him to win today. I just went out there with no pressure, left him alone for most of the race, pulled him out to see what he had left and he picked up well. He's shown how good he is today and he could go anywhere now.”

After switching from Roger Varian to Roger Charlton at the end of 2015, Decorated Knight gradually improved his portfolio with wins in the Listed Festival S. at Goodwood last May 2016 and the nine-furlong G3 Meld S. here in July. Next seen winning the Listed Winter Derby Trial on Lingfield's Polytrack Feb. 4, the chestnut went to Meydan to capture the G1 Jebel Hatta over nine furlongs Mar. 4 before finishing sixth in the G1 Dubai Turf three weeks later. Returning to Europe to land The Curragh's Tattersalls Gold Cup May 28, he progressed again to split Highland Reel (Ire) (Galileo {Ire}) and Ulysses (Ire) (Galileo {Ire}) when second in Royal Ascot's G1 Prince of Wales's S. June 21.

One of the main victims of the interference caused by the manoeuvre of Taj Mahal (Ire) (Galileo {Ire}) when sixth in the G1 Eclipse S. at Sandown July 8, Decorated Knight continued to be a horse that the punters refused to believe in when 16-1 for York's G1 Juddmonte International S. and he never fired there as he wound up fifth Aug. 23. Anchored at the tail of the field as the newly-liberated Eminent took off like he was taking part in the Flying Five under Dettori, he stayed out of trouble along with Poet's Word with the pace setting up perfectly for the closers. When you are three in front of Success Days (Ire) (Jeremy) you are generally going too fast, but to Eminent's credit he kept galloping in the straight as those bunched towards the rail struggled for room. Ryan Moore was trying to keep Churchill from lugging down to the fence, but the imposing favourite was hard to steer and he hampered stablemate Cliffs of Moher (Ire) (Galileo {Ire}) there before Moonlight Magic (GB) (Cape Cross {Ire}) delivered a promising surge. Eminent kept him at bay, but Decorated Knight and Poet's Word swept down the outer as Almanzor (Fr) (Wootton Bassett {GB}) had 12 months ago to take over inside the final furlong with the former proving too strong.

“Andrea said he knew he was going to win turning in and said he had them covered,” a surprised Roger Charlton commented. “He showed an amazing turn of foot and there was nothing flukey about it. He hated the ground at York and I don't blame him for that, plus he got bashed about in the Eclipse but has improved and improved. He is tough and has been on the go since February and to keep going all the way through the season is a credit to the horse. I was half thinking this might be his last race, but I'll look at the [Oct. 21 G1 Qipco] Champion Stakes at Ascot now.”

James Doyle, rider of runner-up Poet's Word, told the Racing Post, “He settled really nice and I got a nice tow into the race. He picked up really well and I thought we were going to get there, but Andrea got a nice lead off us and just pipped us late on. He has a massive future and it was a good run. Sir Michael thought he was a superstar and chucked him in here. He was quite confident beforehand and he nearly did it.” Frankie Dettori said of Eminent, “When I got to the furlong pole and I was still in front, I said to myself, 'Aye, aye, this is looking good', and he was still galloping for me. I was just beaten by two very good horses in the end. He's had a hard season. He started off in the Craven and then the Guineas. I couldn't fault him at all. He gave me a lovely feel.”