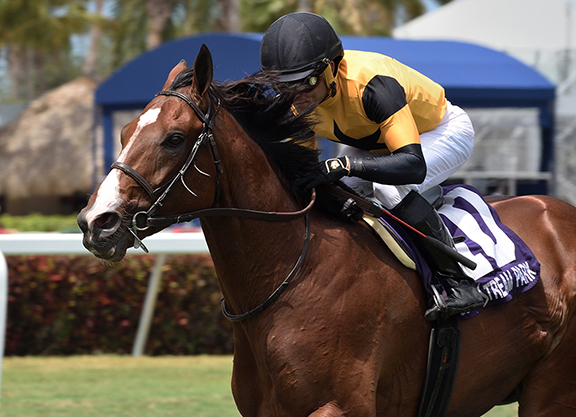 Trainer Christophe Clement earned his 2000th career victory Friday afternoon with a son of Declaration of War in Gufo, and picked up right where he left off Saturday, with last year’s GI Summer S. hero Decorated Invader making a successful sophomore debut to give Clement his second win on the card through four races. A fast-finishing second on debut at the Spa last July, Decorated Invader broke through by daylight a month later before his visually impressive tally in Woodbine’s Summer. He settled for fourth in the Nov. 1 GI Breeders’ Cup Juvenile Turf after getting shuffled back early and then uncorking a head-turning but very wide rally that likely left many of his backers feeling like they were on the right horse but got nothing to show for it. Backed early and often here against a field that included last-out GIII Palm Beach S. hero Vitalogy (GB) (No Nay Never), Decorated Invader broke slowest but was unhurried early as a pair of foes hooked up and sped away through impossible fractions of :22.53 and :45.59. The bay launched an outside bid heading into the home turn, spinning into the lane some five or six deep. He took a few strides to level off, but once he did he inhaled gutsy pace presence Get Smokin as South Bend followed him in.

The winner’s dam, who dominated her only career start sprinting on the dirt, was bred to Distorted Humor for 2020. His third dam is GISW Hail Atlantis, who produced MSW and successful sire Stormy Atlantic as well as the dam of GISW Bandini.