Decision to Close HHR has brought Urgency to the Forefront 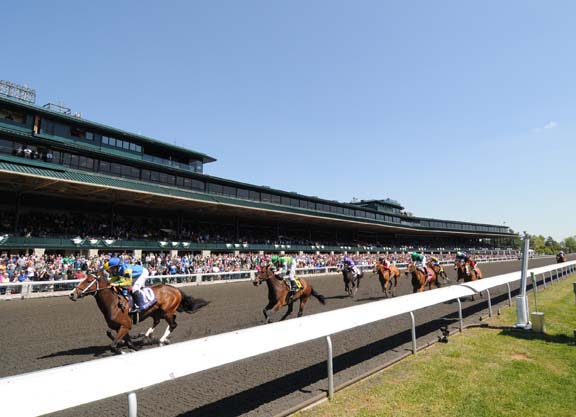 Two days after Keeneland Association and Red Mile announced they would be shutting their joint historical horse racing (HHR) venture at the Lexington harness racino while imploring the Kentucky legislature to provide “more clarity” regarding the disputed legal status of HHR, Vince Gabbert, Keeneland's vice president and chief operating officer, was called upon during the Jan. 26 Kentucky Thoroughbred Development Fund (KTDF) teleconference to explain why that decision was made in the absence of any formal order from state officials to cease HHR, which is ongoing at other licensed locations despite an apparent dead-end to the case in the courts.

“We did, as you can imagine, some significant research and going back and forth to ensure that we were making the right decision as it relates to our joint entities between us and Red Mile,” Gabbard said. “I will tell you that we feel like we took a very conservative approach.

“But I think in every way possible we've seen the measures that we took over the weekend have helped bring the urgency even more to the forefront than what we had so that the legislature understands the impact that not only racing, but HHR has on the economy in the commonwealth,” Gabbert continued. “And hopefully, we will see a legislative remedy in the next couple of weeks.”

Then last week, on Jan. 21, the Kentucky Supreme Court denied a petition for rehearing its 7-0 Sept. 24 judgment that told a lower court to re-examine the legality of historical horse race (HHR) gaming in the commonwealth.

Although the Supreme Court case only involves HHR machines made by Exacta Systems, whose machines are approved for use at Red Mile, Kentucky Downs and Ellis Park, the gaming systems operate in broadly the same manner throughout Kentucky, meaning that a precedent established for one version is likely to affect all forms of HHR gaming.

The racing industry's urgent focus is now on Kentucky lawmakers to legalize HHR, but roadblocks loom in the form of conservative resistance to the expansion of gambling in the state and the fact that the legislature only meets for 30 days in odd-numbered years, with the 2021 session scheduled to end Mar. 30.

The articulation of Keeneland's position and the political leverage it could possibly generate came several hours after a dire Tuesday morning announcement by Ellis Park that its racino could go out of business without the legalization of HHR.

“Without the revenue associated with HHR, there is no realistic path forward for Ellis Park,” Ellis general manager Jeffery Inman said in a statement released to Kentucky's Eyewitness News. “Were we to rely only on racing and simulcast revenue, we could not even keep this 99-year-old facility maintained, let alone provide the financial investment necessary to prepare for and conduct a world-class live race meet. Without HHR support, purses would drop dramatically, resulting in a greatly diminished live racing product. In short, the loss of HHR revenue at Ellis Park would likely threaten the very survival of one of Kentucky's iconic racing venues.”

It's also been nearly four months now since Churchill Downs Inc., (CDI), the gaming corporation that owns the tracks and HHR licenses associated with Churchill Downs Racetrack and Turfway Park, has already halted reconstruction on its demolished Turfway grandstand, vowing not to continue the planned rebuild until HHR's legality gets sorted out.

As Bill Landes III, the chairman of the KTDF advisory committee, glumly put it during Tuesday's meeting, “As if we all don't know, we could use some remediation of HHR.”

But outside of writing letters seeking help to elected and appointed officials in Kentucky (which the KTDF board voted unanimously to do), there were no other concrete ideas proposed to put HHR back on firmer legal footing.

KTDF board member J. David Richardson suggested emphasizing in those letters that “our perspective is a bit unique in that we actually delve into what [HHR revenue] means to Kentucky racing, probably more deeply than virtually any group, I think.”

Richardson said it was important “to let people know that the stewardship of these monies are very closely monitored by this committee and by our staff and are really appropriately used.

“This isn't 'funny money,'” Richardson summed up. “I think it's important to reiterate every now and then how closely we follow every dime.”

To that end, the KTDF voted unanimously to forward approval recommendations to the Kentucky Horse Racing Commission for $2,061,900 in KTDF funds for Keeneland's spring meet and a range of $4.3 to $4.9 million for the Churchill Downs meet that spans April-June.

Gabbert said that Keeneland's “goal, from an overall purse standpoint, would be to be on par with where we were in spring of 2019.” He did not cite specific dollar amounts.

Ben Huffman, who serves in the dual capacities of racing secretary at Keeneland and the director of racing at Churchill, said that for Keeneland, “I'm kind of putting on the finishing touches of the condition book; actually may go to the printer with it in about 10 days or so. But the maiden special weights will be $79,000. And the 'non-winners of two' allowance race will be $81,000 at Keeneland this spring.”

As for Churchill's levels, Huffman said, “we haven't even met here collectively about spring purses yet,” but that he expects those figures to be available by mid-February.