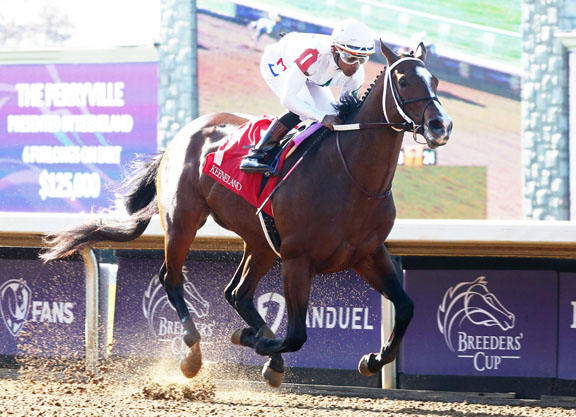 Nearly a year after suffering his first defeat in last winter's GI Runhappy Malibu S., China Horse Club and WinStar Farm's NASHVILLE (Speightstown) will return to the races as a likely prohibitive favorite in this sprint at Oaklawn. Starting his career with a devastating 11 1/2-length romp as a 3-10 favorite in the Saratoga slop last September–easily good enough for 'TDN Rising Star' honors–the $460,000 Keeneland September proved that was no fluke with an effortless 9 3/4-length allowance score at Keeneland and a facile 3 1/2-length victory in that track's Perryville S. in which he set a track record, clocking 1:07.89 for six furlongs. Favored in a highly-anticipated clash with Charlatan (Speightstown) in the Malibu, Nashville set sizzling early splits before retreating to finish a well-beaten fourth.

“It's just kind of a starting point,” WinStar President/CEO and racing manager Elliott Walden told the Oaklawn notes team Wednesday morning. “We want to get a race in him and see where we are. It looks like a good spot. There's some competitive horses in there and it will give us a good barometer.”

Nashville shows a half-dozen breezes for this return, capped by a maintenance four furlongs in :51 2/5 (14/20) over this track Dec. 6.
“It's been a long road,” added Walden. “Sometimes, horses make you wait. Nothing major, but had a couple of starts and stops this year. You're always concerned about a layoff, but Steve [Asmussen] knows how to handle these horses. He said he's ready. Just looking forward to getting him back.” TJCIS PPs