Dead Heat Between Panthalassa and Lord North in the Dubai Turf 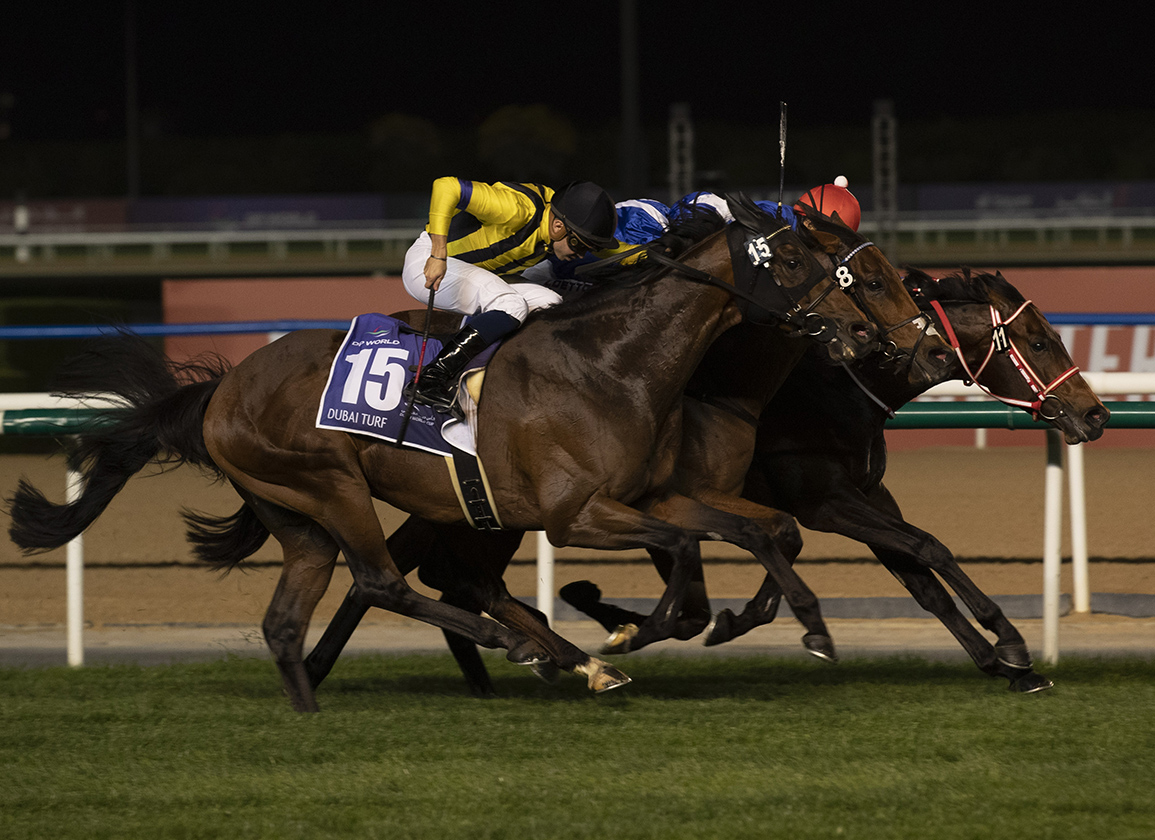 In a race for the ages that three horses deserved to win, the brave pacesetter Panthalassa (Jpn) (Lord Kanaloa {Jpn}) and defending champ Lord North (Ire) (Dubawi {Ire}) could not be separated and a dead-heat was eventually declared. A full eight minutes passed after a course-record smashing renewal of the $5-million G1 Dubai Turf before a stunned Meydan Racecourse audience knew which of the trio had emerged victorious in a desperately close finish.

Sparkling trainer Yoshito Yahagi, who was savoring his third win on the card, exclaimed, “We've had a lot of good luck today so we didn't think we'd lose! I've never known a wait like that in a photo finish.”

Then, the fast-finishing Vin De Garde (Jpn) (Deep Impact {Jpn}) was declared a hard luck third despite being well in front just past the wire. His disappointed jockey Mickael Barzalona said, “My horse ran a very good race. We were unlucky.”

As the the eventual winning pair circled the walking ring with their connections anxiously awaiting the judge's decision, racing pundits marveled over whether they had ever witnessed a more exciting race in World Cup night history.

Under jockey Yutaka Yoshida, Panthalassa, a Group 2-winning entire in his native Japan who had never ventured outside of his homeland, bagged the early lead, set demanding fractions and gave his all while racing closest to the far side rail.

A pleased Yoshida said, “It was a very good run from my horse and he did all that I asked of him and only just managed to hold on at the end.”

Flanked on both sides by his Japanese-trained revivals, Lord North, a 6-year-old gelding who had broken the Meydan course record in last year's renewal when beating Vin De Garde by three lengths, benefited from regular rider Frankie Dettori's patience and a well-timed bid.

Awaiting the verdict, Dettori said, “I thought I was beaten on the line so I will settle for a dead-heat if it's available. He had half the year off, he almost died last year so to get him back performing at this level, it is a credit to the team.”

A poised John Gosden, co-trainer with his son Thady of defending champion Lord North, said, “That's a very fair result as we got ourselves in a bit of a Japanese sandwich there and those horses are so tough. They've been buying horses for the last 30 years or so and their investment is paying dividends, they've come here and knocked us for six–they've gone and won four races now.”

He continued, “I'm thrilled with our boy. He's been off for a year with a very nasty throat infection and we've managed to get him back in time.”

The 4-year-old Newmarket-based filly Saffron Beach (Ire) (New Bay {GB}), ridden by Hollie Doyle, finished best of the rest, 3 1/2 lengths behind the winners. Her satisfied trainer Jane Chapple-Hyam said, “She ran a great race. I'm really delighted. she's so tough and we'll have a lot of fun with her this year.”

If the race had a disappointment, it was the highly-regarded Japanese colt Schnell Meister (Ger) (Kingman {GB}), who crossed the line in eighth. His jockey Christophe Lemaire said, “He had a good trip in the middle. He didn't finish like I expected. He is better than that.”

The William Haggas-trained Mohaafeth (Ire) (Frankel {GB}) cost himself his chance when sluggish to begin. He ended up 10th in the field of 14.

The 2004 renewal of the race, then known as the Dubai Duty Free and contested at Nad Al Sheba, finished in a dead-heat between Paolini (Ger) (Lando {Ger}) and Right Approach (GB) (Machiavellian).

The five-year-old horse Panthalassa was sired by Lord Kanaloa (Jpn) (King Kamehameha {Jpn}), a world-class sprinter who won 13 of his 19 races and is best known as the sire of G1 Hong Kong Sprint winner Danon Smash (Jpn) and the redoubtable champion Almond Eye (Jpn), a multiple Group 1 winner in Japan and Dubai. His dam is Miss Pemberley (Ire) (Montjeu {Ire}), who raced six times in Japan without winning. Five of her eight foals have won in Japan with Dimension (Jpn) and Etendard (Jpn), a pair of Deep Impact fillies, joining Panthalassa as Japanese black-type performers.

Lord North, a gelded son of Champion sire Dubawi, was bred by Godolphin in Ireland. Raced by HH Sheikh Zayed bin Mohammed Racing, his dam is Najoum (Giant's Causeway), a Kentucky-born Godolphin homebred, who won two of her four lifetime starts and showed promise as a 2-year-old winning a seven-furlong race on turf and an eight-furlong race on Polytrack. Najoum is a half-sister to GI Blue Grass S. winner and former Kentucky-based stallion Bandini (Fusaichi Pegasus). In addition to Lord North, Najoum has produced three other foals with the horse Chronicles (GB) (Street Cry {Ire}), winner of a 10-furlong Irish maiden race as a 3-year-old, being her only other winner.