Dayoutoftheoffice's Career One to Remember at Siena Farm 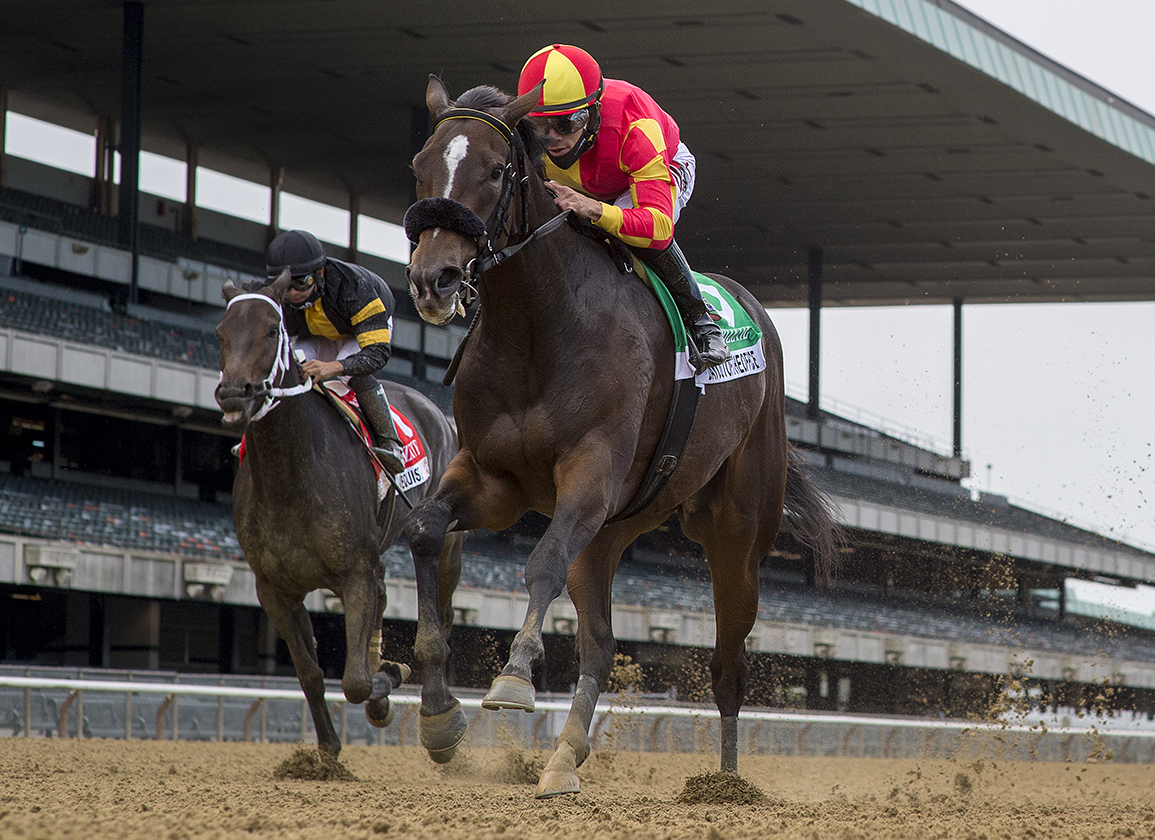 Read on for our visit with 2020 GI Frizette S. winner Dayoutoftheoffice | Sarah Andrew

Nacho Patino had high hopes for Dayoutoftheoffice before she had even hit the ground at Siena Farm.

Her dam, Gottahaveadream (Indian Charlie), was a relatively large mare and had consistently thrown size and scope in her first three foals, so the Siena team had decided to pair her with Into Mischief. The resulting foal, Patino said, was better than what they had imagined.

“I loved the filly when she was born,” Siena Farm's General Manager explained. “She was a big, strong filly with the size and scope we were hoping for. I remember calling Anthony [Manganaro, Siena Farm Chairman] and telling him the mare got a beautiful Into Mischief filly.”

As spring turned to summer, Dayoutoftheoffice looked to be the prized weanling of her foal crop at Siena. But one foggy morning in September, the trajectory of her career changed entirely.

Manganaro was in town and told Patino he wanted to take a look at Gottahaveadream's filly.

“It was very foggy and the guys were bringing the weanlings closer to the gate,” Patino recalled. “We were driving up to the barn when we heard all this commotion. The horses had spooked and they took off running in the field. When the guys finally brought them into the barn, that's when we saw Dayoutoftheoffice had run into a fence. Her knee looked like somebody had taken a sledgehammer and hit her.”

Patino immediately sprang into action, loading the injured weanling onto the van and calling the clinic as soon as they were on the road.

“When one of these things happens, you pretty much know that as far as this horse becoming a racehorse, it's probably not going to happen,” he said.

But at the clinic, they discovered that there was minimal damage to the bone or the ligaments. The filly returned to the farm a few days later and for weeks, Patino diligently changed her bandage daily.'

“After three weeks, the knee looked great,” he remembered. “There was a lot of swelling, but the wound had closed. The problem was that for everything to heal, the skin had become stiff and there was no flexion in the knee.” 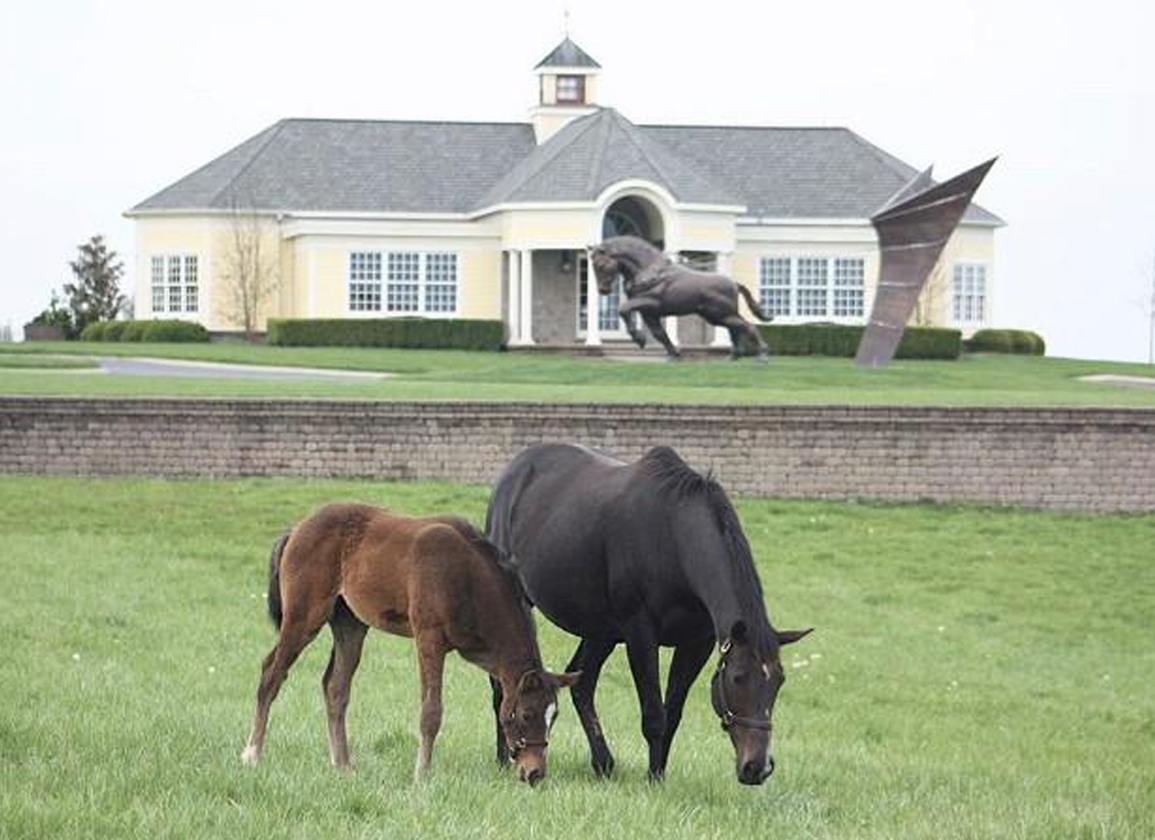 Dayoutoftheoffice and her dam Gottahaveadream at Siena Farm | Siena Farm

Patino and his team worked with the filly daily to get some flexibility back in the joint, using the cold-water spa and trying out other forms of therapy. When it came time for sales prep to begin, Patino decided to keep her on the same track as the other sales yearlings.

“You could see that the knee was never going to be normal, but running around in the field, she looked fine,” he said. “I think the knee was probably bothering me more than it was bothering her. I was kind of hesitant to put her on the walker or exercise her like the other yearlings, but we started sales prepping and it was a completely different horse. Everything she was doing was very easy for her and she just loved it. You didn't have to make her work, she did it on her own.”

Even as the filly flourished in her training, the veterinarians told Patino she had a 50-50 shot of seeing the racetrack. He knew she would be overlooked at any sale.

“People would take one look at the knee and turn around,” he said.

Patino and Manganaro, along with Siena's President David Pope, decided to send her to Tim Hamm, a conditioner they had shared success with in 2016 with My Dear S. winner Velvet Mood (Lonhro {Aus}).

“Tim has a program that he will work out a deal with us and for 50% equity, he will train them at no expense to us,” Pope explained. “So it was a win-win. Dayoutoftheoffice was in a group of three or four horses that we sent him and we thought she was probably the least likely [to race] because of her injury.”

But Patino said that when Hamm first saw the young filly, his eyes lit up.

“I don't think it took him two seconds to look at the filly,” he recalled. “He loved her size and the physical was there, just looking at the knee you didn't know if she would make it. I remember going to visit her in February and you could see she loved going on the track and she looked normal galloping.”

It wasn't long before Hamm was asking for a name for their juvenile. Pope and Patino discussed options back in the office at Siena.

“Her dam's name is Gottahaveadream,” Patino had reminded Pope.

“Nacho, my dream is to have a day at the beach,” Pope had replied.

They looked up the name Day at the Beach, but it was already taken.

“Well my dream is to have a day out of the office,” Patino suggested.

They tried again with Dayoutoftheoffice, and the name was available.

“We didn't even tell Anthony, we just gave her the name,” Pope recalled with a laugh. “Next thing we know, Anthony is calling us up and he hated the name. But after she won the Schuylerville, he called us and said, 'You know what? I love that name.'”

Dayoutoftheoffice made a winning debut at Gulfstream in May last year, flashing through a speedy opening quarter of :21.89 to win the 4 1/2-furlong contest by 4 3/4 lengths. She was dismissed at long odds in her next start in the GIII Schuylerville S., but bested the rest of the field by six lengths.

“I loved the fact that she was 20-1 because we made a little bit of money on that bet,” Pope said with a grin. “We were running against the big boys and it's nice when you're the underdog and you win. She made us proud. You look at the field that day and you see the top outfits in the country that we were racing against. It wasn't even a close race; she dominated.”

Dayoutoftheoffice returned several months later to remain undefeated in the GI Frizette S., besting GI Spinaway S. winner and eventual GI Breeders' Cup Juvenile Fillies champion Vequist (Nyquist) by two lengths at Belmont with over 10 lengths back to the third. She earned a 95 Beyer Speed Figure in the mile-long contest.

Meanwhile, Patino proudly watched these dazzling performances back at Siena with the rest of his team, a group that was undoubtably responsible for getting the filly to the racetrack in the first place by helping her overcome her early setback.

“It kind of validates what we're trying to do here, for the guys more than anything, because every day we were trying new things with the filly and after a while, I think they probably thought we were just wasting our time,” Patino said.” We didn't know if it was going to work out or not, but we kept working with her and now she's a Grade I winner. Now they believe that any horse we're working on could be the next one.”

Patino said that for each of their star filly's races, all of “the guys” at the farm would congregate at the office to watch.

“They like to bet so of course they're betting on our filly,” he recalled. “When they would go back to work, you could see that they really enjoyed it because this horse just won a big race and now they know they're doing something special. For me, she was special because of overcoming her injury and for all the work that we had to put in to get her there.” 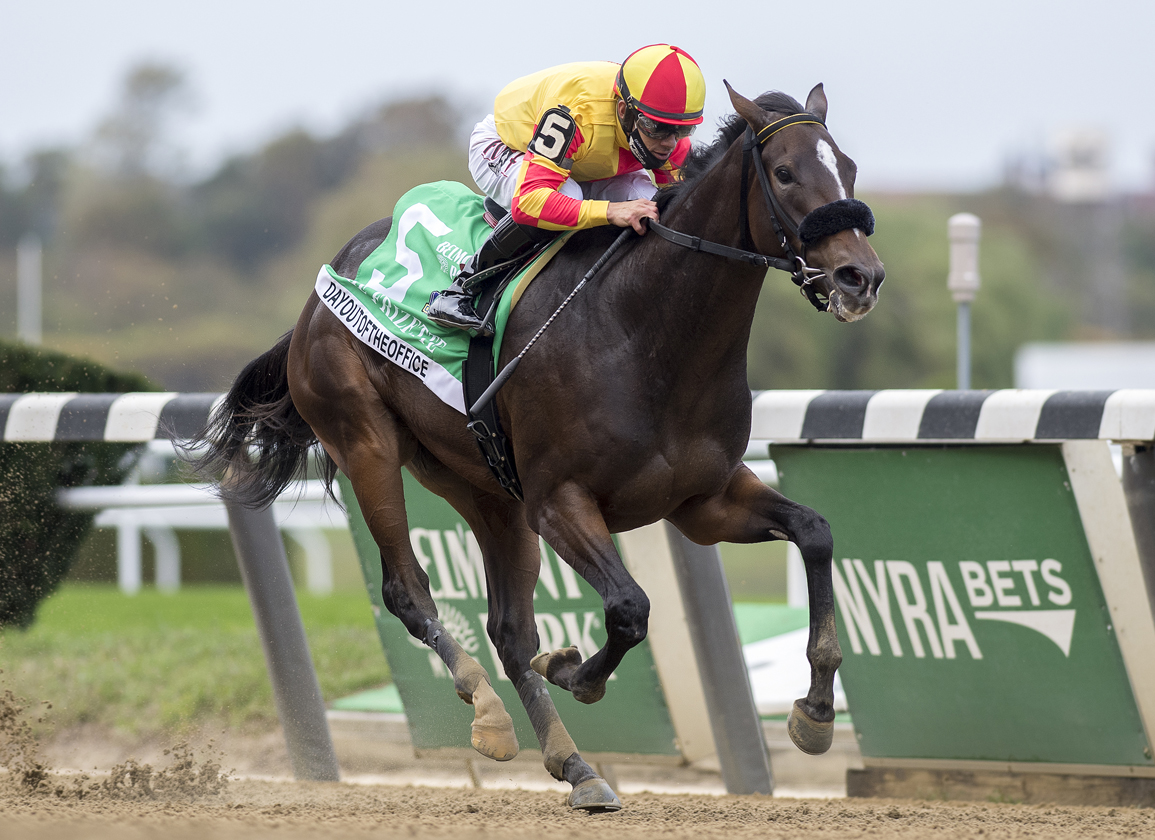 Dayoutoftheoffice gave a gutsy performance to finish second to Vequist at the Breeders' Cup to cap off her juvenile season, defeating the likes of Grade I winners Simply Ravishing (Laoban) and Princess Noor (Not This Time).

She returned at three this year with a runner-up performance in the GII Eight Belles S. and a fourth-place finish in the GI Acorn S. While recording works at Thistledowns over the summer, she sustained an injury and was retired soon after.

Much thought was put into what to do with the Grade I winner, but it was ultimately decided that she would go to the Fasig-Tipton November Sale.

“I come from the business side of it and I see an opportunity that we could take any funds we generate from that sale and reinvest to get multiple mares to grow our broodmare band to do bigger and better things,” Pope explained. “With her being our third Grade I winner, it's been very special and while we do approach it as a business, we also get emotionally attached to these horses. So we'll always be a fan of hers.”

Dayoutoftheoffice will sell as Hip 156 at the 'Night of the Stars' on Nov. 9 with the ELiTE consignment.

“We're excited to have Dayoutoftheoffice at the sale,” Fasig-Tipton's Boyd Browning said. “It's unusual to have the opportunity to sell a Grade I winner at two by Into Mischief. It's a pretty unbeatable combination from a sales perspective and it's a pretty unbeatable combination from a breeding perspective. I think what made Dayoutoftheoffice special on the racetrack was the ease in which she won. When you watch the replays, she's pretty much winning in-hand against the best in New York in some very key races. I think when you look back at that group of 2-year-olds last year, we're going to say it was a really deep group and a very talented group of horses.”

Dayoutoftheoffice's pedigree is another factor that Browning said will attract buyers at the upcoming auction.

“One of things I really love about Dayoutoftheoffice is the influence on the broodmare side of things. I think we're going to look up in 15 or 20 years from now and say Indian Charlie was a remarkable broodmare sire. He's already off to a great start, being the broodmare sire of some horses like Mitole (Eskendereya) and Hot Rod Charlie (Oxbow).”

“Indian Charlie is one of the top broodmare sires out there and her pedigree has got graded stakes horses all over the page,” Pope said. “She is something that you're looking for in a broodmare. I think you'll see a lot of people in the industry focusing on Into Mischief as the next top broodmare sire, so this is a great opportunity for people. How many opportunities do you get with a Grade I-winning filly by Into Mischief coming to the marketplace?”