Davis Not Looking to be 'Cheap Speed' 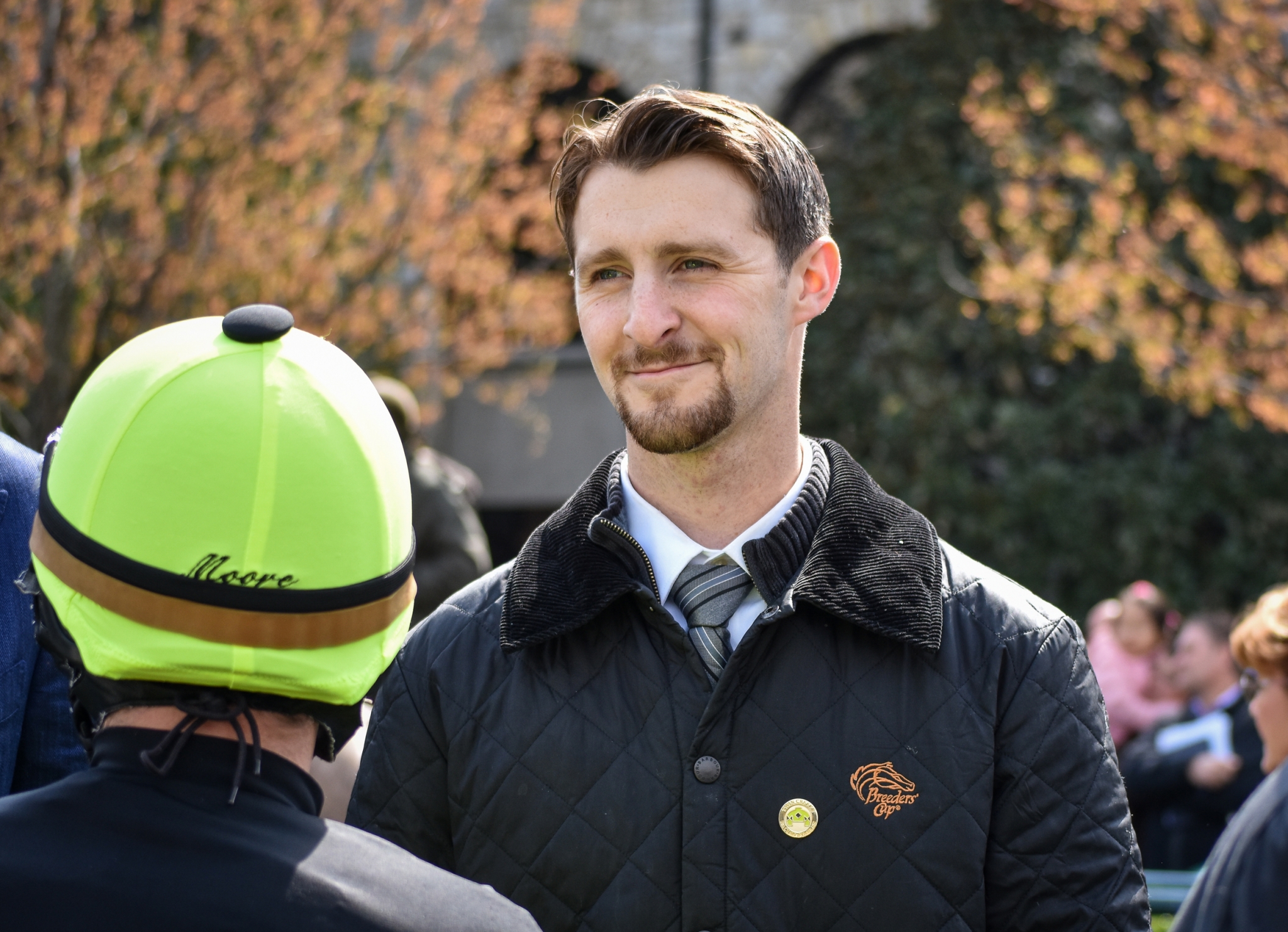 SARATOGA SPRINGS, New York–Twenty-eight-year-old trainer Chris Davis has gotten off to a pretty fast start since going out on his own last fall, and his career could really take off depending on the result of Sunday's GII Prioress S. at Saratoga. He'll saddle the fleet-footed Student Body (Colonel John), last seen crushing older allowance foes by 11 lengths at Ellis July 14.

A lifelong racetracker, Davis is the son of trainer Liane Davis and assistant starter Hershell Davis.

“I grew up in the industry,” he said. “My mom's a trainer and my dad has galloped horses and worked on the starting gate for more than 30 years. I grew up on the backside of the Chicago tracks–Hawthorne, Arlington and Sportsman's Park, going to the Fair Grounds in the 90s with my parents. I've been all over.”

Davis began galloping horses for trainer Richard Hazelton at the age of 15, and later worked for Wayne Catalano and Pat Byrne–he got on the likes of 2012 GI Florida Derby winner Take Charge Indy (A.P. Indy) for the latter. Eventually he took a job with Mike Stidham as an assistant trainer, and worked for him for some 5 1/2 years.

“I was the travel guy,” he said. “Wherever a stakes horse went, I went.”

Eventually he was recruited by top California-based conditioner Phil D'Amato and made the move out West.

“I liked California; it was a good time,” Davis said. “But I'm a Midwest guy. I like racing back here, I've got family back here and most of the people that I know client-wise are more back here.”

So when an opportunity came about to be based closer to home, he jumped at it. Given two horses to train for Louise and Kiki Courtelis's Town and Country Farms, Davis went out on his own. His first starter was Town and Country's My Year is a Day (Fr) (King's Best) in the GIII Franklin County S. at Keeneland in October, and his first winner was maiden breaker Uncork the York (Ire) (Vale of York {Ire}) for the same operation at Fair Grounds the following month.

“They were looking for a guy in the Midwest–they had Todd [Pletcher] and some other guys in New York, and Phil and Mr. Mandella in California, but they were kind of looking for that middle guy,” Davis said. “They approached me, offered me the job and I took it and ran with it. I had two horses last October when I went out on my own, and I've got 20 now–I couldn't be happier.”

“We've had a pretty good rapport,” Davis said of Potter. “We met when I was running the barn for Phil in Kentucky last year. I did really well with a couple of the horses he sent me, and I think that instilled confidence in my abilities–especially with some of the problem horses. They sent me a couple horses that Mr. Pletcher had who just weren't getting the individual attention they needed and needed a little extra help mentally. Luckily, I managed to do really well with them.”

Student Body, just a $19,000 KEESEP yearling and a year-younger half-sister to Broad's winning colt Student Body Left (Tizway), began her training with Scott Hansen in California at two, but she was eventually stopped on and given time to grow up.

“A lot of credit needs to go to Scott Hansen,” Davis said. “He had her out in California as a 2-year-old and decided to give her some time off–she was immature, had little issues here and there that babies go through. So they gave her time and she turned out to be a nice little horse.”

Student Body joined Davis at Keeneland in the spring, quickly got acclimated to his program and began to display signs that she might be a runner.

“When she first came in she was kind of hyper, which is normal for California horses,” said Davis. “So we got her to switch off mentally and really relax. When I breezed her out of the gate

(4f in :48 4/5 at Keeneland May 26), she just showed natural speed that you don't see back here very often. You see it out in California, but you don't see horses this quick here. Her gate drill was unreal. She's just one of those horses who's simple to be around. Once we got her to relax, she's really come into her own mentally and you almost forget about her. She's just so mentally sound, and that makes my job very, very easy.”

The bay didn't waste any time showing off her ability in the afternoon, either. Dismissed at 36-1 for her seven-panel unveiling at Churchill June 3, she zipped right out to the front and never looked back en route to a 1 3/4-length success. Things didn't go nearly as smoothly when Davis wheeled her back three weeks later, however, and she finished a distant last of nine stretched out to 1 1/16 miles.

“She'd never taken dirt before,” he said. “I told Gary and Shannon, 'Man, I really hope we don't draw the rail.' Of course, she drew the rail in a full field. She missed the break, hit another horse–[rider] James [Graham] could've sent her, but decided, 'You know what, first time going two turns, might as well teach her something.' But when that wall of dirt hit her in the face going into the first turn, she threw her head up and practically made a right-hand turn. She just wanted no part of it.”

It would've been hard to know exactly what to expect from Student Body when she wheeled back on short rest again and cut back for a tough-looking Ellis allowance last time, but she couldn't have been much more impressive that day, showing the same type of run-them-off-their-feet sped she had first out and earning a 94 Beyer Speed Figure in the process, which should put her squarely in the mix on Sunday.

“She didn't really do any running that day, so I came back quick with her in three weeks and ran her in a really tough allowance race against older horses who had all been running second and third at Churchill,” Davis said. “For her to make all those horses look ordinary was pretty impressive.”

Opting to pass on the one-mile GIII Groupie Doll S. against older rivals back at Ellis earlier this month, Davis called on his experience bringing D'Amato trainee Coppa (Yesbyjimminy) up to New York last year for a win in the GIII Victory Ride S. and start in the Prioress.

“This race, historically, has come up with pretty short fields,” he noted. “I took a filly up there last year for Phil named Coppa and I think this filly is on par with her talent-wise if not better. So it's really a no-brainer.”

Having traveled with so many stakes performers as an assistant, what would it mean to Davis to get his own graded win at Saratoga so early in his career?

“If I can win a graded stakes race at Saratoga in my first year of being on my own, words can't describe how elated I'll be,” he said. “And not just for me, but my whole crew–my owner, my grooms, my hotwalkers, my other rider. It would be an incredible jumpstart for my career. I don't want to be 'cheap speed'–I want to be a mainstay for a very long time. I want to compete up at the top with the Todds, the Chad [Browns], the Phils. To win a Grade II with a filly like this and for connections like this who have already done so much for me would mean the absolute world.”