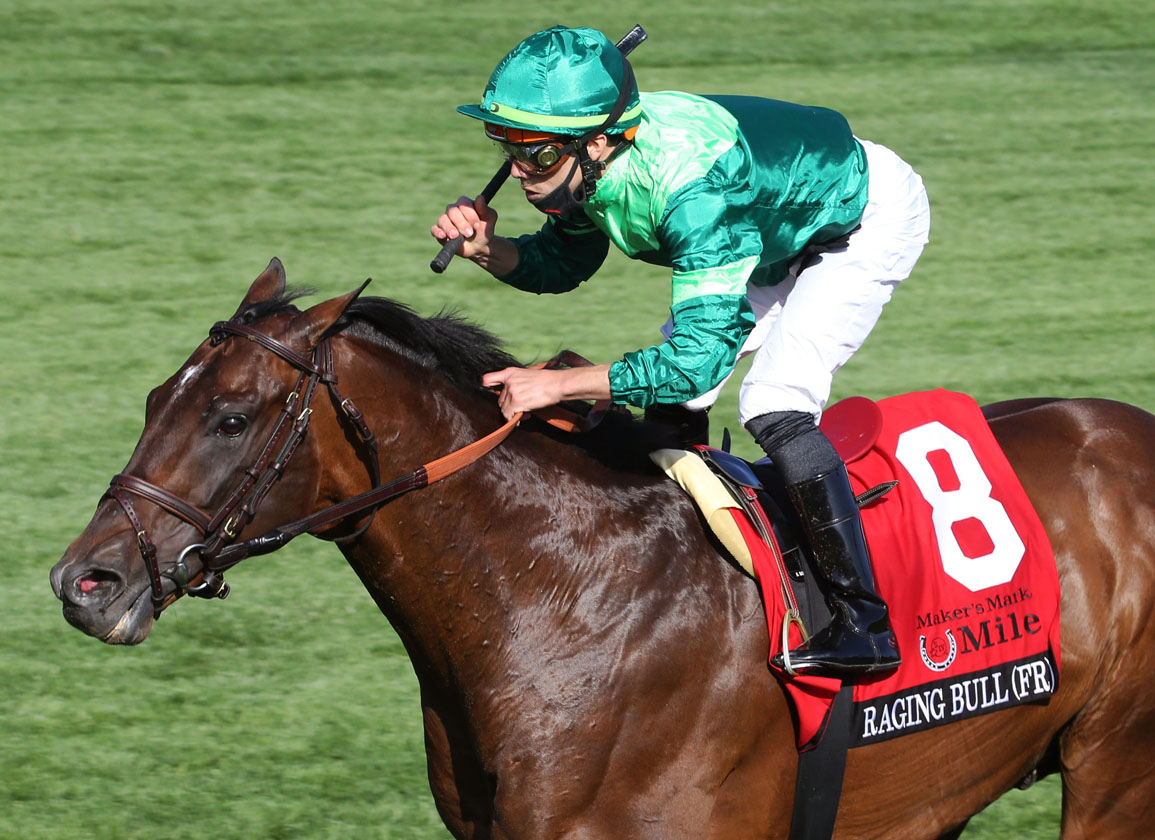 Fresh off a season in which he earned the mantle of Europe's leading sire of 2-year-olds, it would seem that Dark Angel (Ire)'s legacy as a sire of precocious and classy sprinter/milers is set. The question inevitably becomes, then, who is next in line to carry on his branch of the Acclamation (GB) sireline?

The 17-year-old Dark Angel already has a Group 1-producing sire son in his G1 Diamond Jubilee S. and G1 July Cup-winning Lethal Force (Ire), whose Golden Horde (Ire) also won at the Royal meeting when he took the G1 Commonwealth Cup in 2020. Both Lethal Force and Golden Horde are now at stud in France. Dark Angel sons Gutaifan (Ire), Markaz (Ire), Alhebayeb (Ire) and Heeraat (Ire) have also sired stakes winners, and a significant chapter could be written over the coming seasons, with Dark Angel's world champion sprinter Harry Angel (Ire)'s first runners set to hit the track in just a few months.

In the meantime, Dark Angel's line also has a chance to branch out intercontinentally, with his son Raging Bull (Fr), a Grade I-winning turf miler, about to cover his first book at Gainesway Farm in Kentucky.

Raging Bull was in no way a small coup for Gainesway, or for Kentucky breeders: with the exception of only the brilliant gelded sprinter Battaash (GB), Raging Bull is Dark Angel's most accomplished son by both earnings (£1,335,394) and Grade/Group 1 wins (3).

Raging Bull was purchased by Eugenio Colombo on behalf of Peter Brant for €90,000 from the Wildenstein Dispersal at Goffs Orby in 2016. Joining trainer Chad Brown from the outset, Raging Bull didn't appear until April of his 3-year-old campaign but soon stamped himself a top-class turf runner in the U.S., winning his first two starts before adding the GII Hall Of Fame S. and the GII Saranac S. at Saratoga, over 1 1/16 miles and 1 1/8 miles, respectively. He capped a 3-year-old season in which he won five of his seven starts with a victory in the 1 1/8-mile GI Hollywood Derby in his first attempt at the highest level.

Though Raging Bull didn't find the winner's circle during a 4-year-old campaign in which he ran exclusively in Grade Is, he was never disgraced and picked up placings in the GI Manhattan S. and the GI Fourstardave H. Raging Bull kicked off his 5-year-old season in 2020 with a win in the GI Shoemaker Mile at Santa Anita before finishing third in the GI Maker's Mark Mile. He would return to Keeneland last spring to win the Maker's Mark, and was also third in the GI Woodbine Mile. In a career that spanned 22 starts over four seasons, Raging Bull ran in 15 Grade Is at seven different racetracks. He won seven times for earnings of over $1.7-million.

Raging Bull stands for an advertised fee of $10,000. He has been syndicated at Gainesway, with Brant staying in, and Gainesway's Director Of Stallion Sales and Recruitment, Sean Tugel, said he expects Raging Bull to cover “150-plus” mares this season.

“He has been very popular,” Tugel acknowledged. “He's been well-supported by his syndicate and that includes Mr. Brant-he's going to breed a large number of mares to him. The breeders who have come to see him, most are leaving here booking a mare to him; they like what they see. Certainly the initial contracts and the initial interest in him tells us he's going to be very well supported his first year.”

Indeed, social media was awash with praise for Raging Bull as breeders ventured out to inspect him during the November sales.

“I think breeders were pleasantly surprised by his physical presence when he comes out,” Tugel said. “He has a lot of leg under him and he has bone and substance. Not everybody who was coming out to see a son of Dark Angel was expecting to see that kind of physical presence. He's an extremely good mover and uses himself extremely well. Everyone wants to breed an athlete and he certainly presents himself as an athlete.”

With his aforementioned size, scope and leg, Raging Bull takes the eye as a dirt horse just as much as a turf horse. That could be down to the American influence lent to his pedigree by damsire Mr. Greeley, a son of Gone West and grandson of Mr. Prospector. Raging Bull's dam, Rosa Bonheur, was also purchased by Brant from the Wildenstein dispersal in 2016; she cost €80,000 in foal to Siyouni (Fr), who was at the time a rising talent but not the breakout star he is today. Rosa Bonheur was bred by the Wildenstein family out of their Rolly Polly (Ire) (Mukaddamah), whose versatility and talent on the track is indicative of her grandson's: Rolly Polly won group/graded stakes races in England, France, Italy and the U.S. during a career that spanned three seasons, 18 starts, 10 wins and eight stakes wins. Though Rosa Bonheur's racing career was shorter, the daughter of Mr. Greeley showed the constitution that is evident in Raging Bull when running eight times between April and December of her 3-year-old campaign.

While breeders will overwhelmingly send their mares to Raging Bull expecting to get a turf animal, Tugel noted that it is a distinct possibility, given his pedigree and physique, that Raging Bull's progeny could handle the dirt, too.

“I think being out of a Mr. Greeley mare–who is from the Gone West line and very influential to American dirt and speed– certainly will help,” Tugel said. “Having Northern Dancer lines as well as multiple Mr. Prospector lines–that blood has worked extremely well in America. The amount of leg that he has; you need leg to win dirt races and get over the dirt. So if he transfers that on to his offspring I think he could absolutely be a multi-surface type of sire.”

Raging Bull's sire, Dark Angel, has certainly proven to be that. While his success as a sire, naturally, has been heavily focused on the turf, he has had 366 winners on the dirt and 13 stakes winners on that surface. Last month, Dark Angel's Golden Goal (Ire) established himself as a leading contender for the Gulf region's best dirt races with a win in the G2 Al Maktoum Challenge R1 at Meydan, while a week later Godolphin homebred Real World (Ire) (Dark Angel {Ire}) made it five wins in a row with victory in the G2 Zabeel Mile. That win was on the turf, but trainer Saeed bin Suroor was vocal post-race that Real World, who is already stakes-placed on the dirt, may switch surfaces to target the likes of the Dubai World Cup or Saudi Cup.

It is worth noting, too, that Golden Goal and Real World are eight and five, respectively, making them just the latest stakes winners by Dark Angel to still be at the top of their game well into their careers. Dark Angel was among the very first of a wave of commercial stallions to retire to stud at the end of a 2-year-old campaign, and while that trend is a polarizing one in bloodstock circles it has undeniably in this case resulted in a sire that routinely begets that rare combination of early speed, longevity and class. And it won't hurt Raging Bull's profile that another son of Acclamation who retired at two, Mehmas, is already looking like following Dark Angel's path.

Tugel noted that, like all of Dark Angel's best progeny, Raging Bull had speed, and that he was most effective at or around a mile.

“Dark Angel is a source of speed and that's what we're all looking for in America,” he said. “Raging Bull is a miler and we always say milers make sires. Plus you add Mr. Greeley on the bottom side, it's really speed on speed which is what we're trying to produce here in America.”

“Raging Bull ran through his 6-year-old career and he was a multiple graded stakes winner over multiple seasons,” Tugel added. “To be able to hold that type of form is fantastic. In America we need outcrosses, and he is a complete outcross to all major sirelines barring Mr. Prospector, but you can find many different lines of Mr. P and go different ways. The fact that he can go to all the Storm Cat, Unbridled's Song and Unbridled lines, and Seattle Slew; having that ability to mix with every great American line you want will help him.”

It is no small matter, either, that turf milers are a pivotal part of the bedrock on which Gainesway is built; throughout its history, the farm's various owners have imported turf influences to mix with the American breed, including no fewer than five winners of the G1 Poule d'Essai des Poulains: Blushing Groom (Fr), Green Dancer, Riverman, Irish River (Fr) and, most recently, Karakontie (Jpn). The 2014 Poulains and GI Breeders' Cup Mile winner has, with three crops of racing age, established himself as a very solid and versatile source of winners and stakes horses for his $10,000 pricetag; his first crop includes the high-class turf horses Kenzai Warrior and Princess Grace, as well as Sole Volante, the GII Tampa Bay Derby winner on the dirt. It is most certainly not lost on breeders that Gainesway has a proven track record of turning high-class turf horses into a sought-after sires. And Tugel said he expects Karakontie to go to the next level once his better-bred crops hit the track.

“The last two seasons, once Karakontie's runners got to the track, we've seen his best quality books come,” Tugel said. “His initial crop was his most mares bred, but in the past two seasons he has bred his second and third largest books and best quality. He has graded stakes winners in both of his first two crops of racing age and he has black-type horses in his third crop and hopefully they can go on to be graded stakes winners. But the 2-year-olds coming behind them we have great expectations for, as well as the yearlings and the foals that are hitting the ground this year.

“I truly believe over the next several years we're going to see a lot more from Karakontie. He gets you good, honest horses that train on. They run on dirt and turf, they run on synthetic, he's had a Kentucky Derby starter, he's had multiple graded stakes winners on the dirt. Princess Grace looks like she could be a top level filly, and she's almost a millionaire. His commercial presence has continued to grow; he's only averaged about nine to 10 yearlings per year through the ring but still gets multiple six-figure horses throughout the year. He's just a good, honest horse with great value and potential.”

With the path to success for a turf sire paved at Gainesway, Raging Bull has the chance to cement not only his own legacy, but also that of his sire, Dark Angel, as a sire of sires.