Danzing Candy Could Be Sweet for Sise 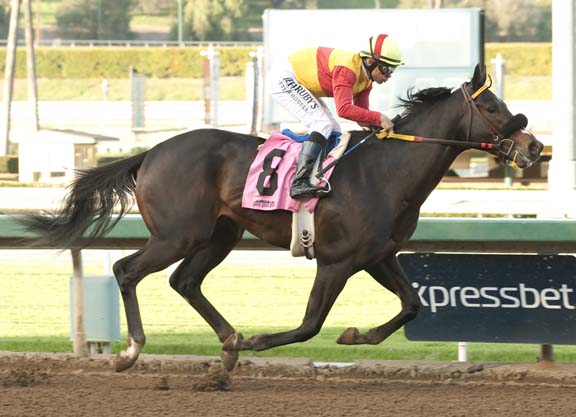 A year to the day removed from last year's GII San Felipe S., trainer Cliff Sise, Jr. finds himself in a strikingly similar spot heading into this year's renewal–with an improving 3-year-old about to make his first foray into stakes company, attempting to establish his GI Kentucky Derby credentials.

Lining up alongside Danzing Candy this Saturday will be 6-for-6 California-bred Smokey Image (Southern Image), GI Los Alamitos Futurity S. winner Mor Spirit (Eskendereya) and multiple graded stakes winner Exaggerator (Curlin), among others. Despite these challengers, Sise is markedly more confident going into this Saturday than he was about tackling Dortmund last year.

Danzing Candy surprised Sise and rider Mike Smith in his allowance win by going to the lead. Smith thought this was something done on pure ability and that the horse is better with a target to run at, but the 64-year-old trainer said he'll keep his options open Saturday.

“Mike said he's probably better off if he comes from behind,” Sise relayed, “but it's how he breaks, what post he gets and everything else.”

The dark bay colt, whose half-brother by Candy Ride (Arg) sold for $620,000 at last week's Fasig-Tipton Florida sale, wrapped up his major preparation for the San Felipe with a five-furlong workout timed in 1:01.00 over the Santa Anita oval Mar. 5.

“I told Mike to go about a minute flat, he went 1:01, but he was happy with the work,” Sise said. “He was just breezing on him. He acts like a pretty good horse, he has a beautiful way of moving.”

Meanwhile, Prospect Park, who was originally planned to be entered in the featured GI Santa Anita H. on the same blockbuster Saturday card as the San Felipe, will be sidelined for around three months with “a little fracture in his hock,” according to Sise.