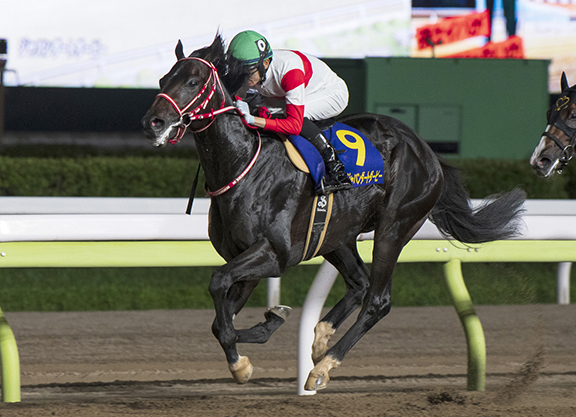 The bettors had it right–well, in a sense.

They pounded the previously undefeated Cafe Pharoah (American Pharoah) into 1-10 favoritism for Wednesday’s Japan Dirt Derby, but Danon Pharaoh (Jpn) (American Pharoah) had other ideas, as he put away pacesetting Daimei Corrida (Jpn) (Eskendereya) in the final 150 meters en route to a 1 3/4-length success. Kitano Octopus (Jpn) (Fenomeno {Jpn}) rounded out a longshot trifecta that returned better than 7,700-1. The victory was worth 40 points on the Japan Road to the Kentucky Derby.

Daimei Corrida jumped alertly from his high draw and crossed the field to lead through the stretch the first time as Danon Pharaoh and Cafe Pharoah raced in close attendance. The favorite, who took an awkward step entering the first turn, and began showing signs of distress 500 meters out, leaving Daimei Corrida and Danon Pharaoh to fight it out to the finish. The front-runner held firm into the final eighth of a mile, but Danon Pharaoh had all the answers, edging clear in the final stages. Cafe Pharoah split the field in seventh.

A maiden winner at second asking last November, Danon Pharaoh added a Kyoto allowance in February. A strong second to Barnard Loop (Jpn) (Lord Kanaloa {Jpn}) in the Listed Hyogo Championship S. at Sonoda May 6, the striking dark bay was well-beaten behind Miyaji Kokuo (Jpn) (Victoire Pisa {Jpn}) when last seen in the Listed Hosu S. at Kyoto May 24.

With victories in the Listed Hyacinth S. and in the G3 Unicorn S. last time, Cafe Pharoah has amassed 70 Kentucky Derby points and can claim the berth in the Run for the Roses if connections so choose. Should they decline the invitation, it will be extended to the connections of Danon Pharaoh.

Danon Pharaoh becomes the eighth stakes winner for American Pharoah and his third on the dirt, joining Cafe Pharoah and Harvey’s Lil Goil, who recently added the GIII Regret S. on turf.