Here Comes When In Sussex Shocker 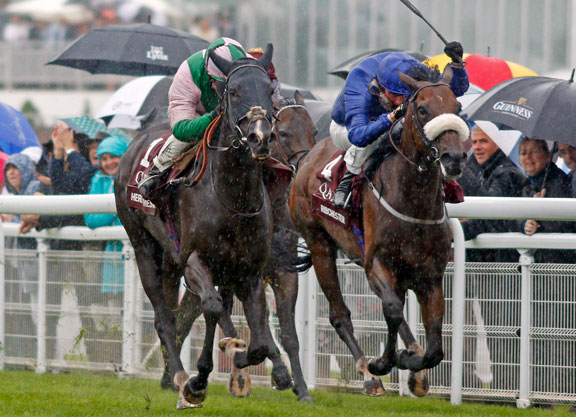 At a Glorious Goodwood which is turning out to be one of shocks and upsets, 24 hours after Breton Rock (Ire) (Bahamian Bounty (GB) took the Lennox it was another 7-year-old veteran gelding in Here Comes When who grabbed the headlines in the G1 Qatar Sussex S., a “Win And You're In” for the GI Breeders' Cup Mile at Del Mar in November. With Churchill (Ire) (Galileo {Ire}) ruled out as a result of the torrential rain and the hot favourite Ribchester failing to reproduce the form of his G1 Lockinge S. and G1 Queen Anne S. wins, Fitri Hay's stalwart had the battling qualities that ultimately counted in a war of attrition. It has been three years since the bay had captured a prize even approaching this quality, with his brace in the 2014 G2 Oettingen-Rennen over a mile at Baden-Baden and G2 Challenge S. at seven furlongs at Newmarket remaining his peak performances prior to this effort.

While the interim period had been largely uninspiring, Here Comes When did manage a fourth placing behind Solow (GB) (Singspiel {Ire}) in this and a second in the seven-furlong G3 Supreme S. also at this track two years ago and like Breton Rock had been relatively lightly-raced and looked after by his stable with Andrew Balding keen to keep him away from quick ground. As recently as Champions Day in October, he was taking part not in the G1 Queen Elizabeth II S. but the fixture's Balmoral H. and was only 10th there so thoughts of landing a Sussex would have been fanciful at that stage of his career. Even after his return to the winner's enclosure in York's Listed Hambleton H. May 18, he was upstaged again by Morando (Fr) (Kendargent {Fr}) when third in Windsor's Listed Midsummer S. at the start of last month but Balding kept the faith. In what can only be seen as a masterstroke in hindsight, his decision to carry out a bold supplementing move last week in the hope that the forecast rain would arrive paid handsome dividends as the £1million event unravelled with each stage of the downpour.

Settled in third early with nothing to lose as Jim Crowley stalked the front-running Ribchester, Here Comes When was in line to pose a threat as the long-time leader began to falter inside the last quarter mile. Gaining a slight lead approaching the furlong pole, he looked only to have Lightning Spear to worry about on his outer with Ribchester losing all momentum and dropping behind. As Crowley gained the upper hand inside the last 50 yards, the favourite had found something to rally but the contest was already sewn up. In the process, Here Comes When was making history as the oldest winner of this race since it was opened up to all ages in 1975, upstaging the two six-year-old winners Noalcoholic (Fr) and Court Masterpiece (GB) who had shared that distinction. “Going through the race beforehand, I was ticking off those that wouldn't go on the ground and I thought I'd definitely be in the first three,” his jockey said. “The weather definitely played into our hands. It's heavy ground and he just loves that.”

Andrew Balding said, “He's here for a reason. We were praying that we got the rain and it's come in time. Jim gave him a great ride. On this ground, he's stones better than he is on quicker ground.” Richard Fahey said of Ribchester, “It's extreme conditions out there, I was very worried–it's not for a flat horse to be racing on, it's for national hunt horses. But he's run a mighty race and he showed good heart to nearly get back up. We came here expecting to win and we didn't, so we are disappointed. We live to fight another day.” Jockey William Buick was bemused by the outcome and added, “I was comfortable enough in front, but from the three to the two he didn't go anywhere. The ground is very bad out there and I suppose it didn't help him at all. It got tight for a stride and then he stayed on again towards the end. It was a pretty strange race really and he was struggling to pick his feet up out of it. He was stumbling forward and falling on his head, but then he gathered himself up as the winner was stopping close to the line. That helped us get closer. It was unsatisfactory.”

Interestingly, Here Comes When's 3-year-old half-sister Melodic Motion (Ire) (Nathaniel {Ire}) lines up as one of the favourites for Thursday's G3 Lillie Langtry coming off three straight wins for Qatar Racing. The dam, who captured the G3 Prix d'Aumale as a juvenile, is a half-sister to three other black-type winners headed by the GII Del Mar H.-winning sire Bonapartiste (Fr) who was also placed in the GI Eddie Read H., GI Oak Tree Turf Championship S. and GI Hollywood Turf Cup. Like a host of smart South American runners, including the G1 Grande Premio Presidente da Republica hero Jet (Brz) (Yagli), the dam descends from the GI Sorority S. runner-up Distinctive Moon and has a yearling colt by Sea the Stars (Ire) who sold to Rabbah Bloodstock for €240,000 at the Goffs November Foal Sale.