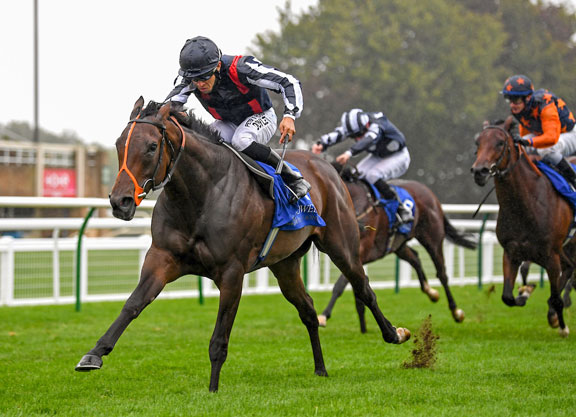 Coming off wins in the five-furlong Weatherbys Super Sprint at Newbury July 19 and York's Goffs UK Premier Yearling S. Aug 20, the McMurray Family's Happy Romance (Ire) (Dandy Man {Ire}) put that experience to full use to garner a first black-type win in Thursday's G3 Shadwell Dick Poole Fillies' S. at Salisbury. Trapped wide initially before settling with two behind, the 11-4 favourite travelled strongly and when delivered by Sean Levey swooped on the lead passing the furlong pole. Despite the game effort of the once-raced Alcohol Free (Ire) (No Nay Never) from there, the pride of the Richard Hannon juveniles was in control and forged a 3/4-of-a-length success, with Scarlet Bear (Ire) (Kodi Bear {Ire}) two lengths away in third. “She's clearly a very good filly and has been a revelation since she was beaten first time,” the winning trainer said. “She got there too soon today, but she makes it look like that as she has such a turn of foot. She's a [G1] Cheveley Park Stakes filly through and she's all about speed at the moment.”

This was only the second run over this six-furlong trip for Happy Romance, who was due to be tried in Saturday's G3 Prestige S. over a furlong further before the weather ruled out that eventuality. Her first three runs over five came in the space of 16 days, with a debut sixth behind Sacred (GB) (Exceed and Excel {Aus}) at Newmarket June 4 followed by a 4 1/2-length success in a Sandown maiden and a fifth in Royal Ascot's G2 Queen Mary S. Sean Levey has partnered her on all outings and he could not hide his enthusiasm afterwards. “Her best attribute is her mentality–she's so easy to ride,” he said. “She goes to sleep in the stalls and you have to wake her up when the last one goes in and that's helping her improve all the time. She's getting bigger and stronger and I always thought that it was her class that was getting her through earlier this season over the minimum distance. I thought we'd see the best of her when she started stepping up in trip and she was more impressive today than at York last time. She travels beautifully and every time I go to pick her up to go through the gears she hits top speed straightaway and is nearly coasting home over the last two furlongs. You're able to ride her wherever you want and change tactics to suit, so if she carries on like this she'll also have a very good year next year.”