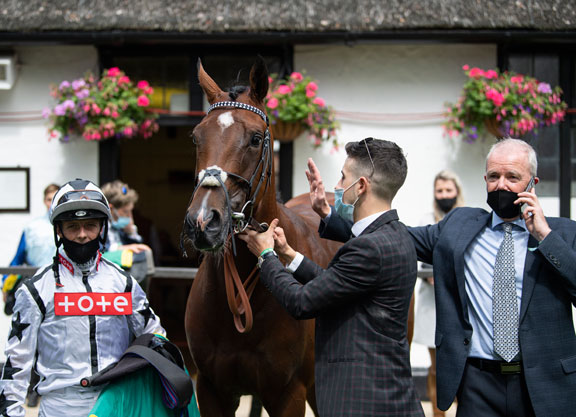 Imperious when taking the G3 Albany S. by storm, Dandalla (Ire) (Dandy Man {Ire}) made her syndicate members sweat in Friday's G2 Duchess of Cambridge S. at a rain-afflicted Newmarket but ultimately prevailed to complete the notable double. Reluctant to load and a touch tardy from the gates, the even-money favourite raced up the centre of the track in fourth early before being asked to close by Ben Curtis approaching the two-furlong marker. Working hard to gain the lead a furlong from home, she was unable to put the contest to bed as she had at Royal Ascot June 19 but kept finding to hold on by a head from the strong-finishing fellow Nick Bradley Racing-owned Fev Rover (Ire) (Gutaifan {Ire}). The latter, who traded at 28-1 and was completing a dream forecast for her owners, was half a length ahead of the 50-1 shot Santosha (Ire) (Coulsty {Ire}) in third.

“She's tough and game and has a great attitude, but I think the ground was a bit sticky for her today,” Curtis said. “It's a bit softer than it was at Ascot and she didn't travel like she did that day. She had a lot of ability and a lot of guts to get home in front. At the end of the race I was trying not to give her too hard a time and do it hands and heels. I could hear them coming, but she had her head down to the floor and held on. She has a great mental attitude, the looks to go with it and evidently the ability to go with that. She has a lot of the ticks needed.”

Soft ground meant that TDN Rising Star More Beautiful (War Front) gave this the swerve and it was also hardly suitable for Dandalla, who had gone to the Royal meeting despite Karl Burke's concerns as to how she would deal with good-to-soft there. Now three-for-three, having won over five furlongs on Newcastle's Tapeta June 2, the bay was also overcoming a minor setback in the lead-up to this. “She is tough and a very high quality filly,” her trainer said. “Ben was adamant the tacky ground didn't help her–she is a good-actioned filly and it was wetter at Ascot, where she got away with it. We had a small issue about 10 days ago with a slight temperature. It wasn't plain sailing going into it and we took a bit of a chance, but we got away with it. Last weekend we weren't sure about running, but she scoped good on Monday and we decided to give it a go, so it's onwards and upwards from here.”

Burke is no hurry to back up the winner now and added, “We will give her a short break now, as she has had three quick-ish runs. The [G1] Prix Morny is in the middle of August, so we have got a bit of time and we can give her two or three weeks and prep her for that. She is in the [G2] Prix Robert Papin, but wouldn't go there. There is the [G2] Lowther at York, but she has a group two penalty now and it makes sense to have a crack at the boys in a group one if she is fit and well. It is amazing to get another good one so quickly after Laurens.”

Burke had talked about the mile Classics as feasible targets for Dandalla next Spring following her Royal Ascot win, but this was not the performance of a filly in need of further and the suggestion from her pedigree is that it is more unlikely than likely that she possesses stamina for a mile. One of the dam's half-sisters was the Italian listed scorer Konkan (Ire) (Aussie Rules), who was stretched at that trip, but there is hope from another of her half-siblings as the listed-placed Cortese (Ire) (Bushranger {Ire}) was a stayer. Further back is Ballymacoll Stud's G1 Prix du Cadran-winning stout stayer Sought Out (Ire) (Rainbow Quest), dam of the G1 Epsom Derby hero North Light (Ire) and another smart performer more in her mould in Cover Up (Ire) (Machiavellian). Also related to the G1 Grand Prix de Saint-Cloud-winning sire Gamut (Ire) (Spectrum {Ire}), Chellalla (GB) (Elnadim) has a yearling filly by Divine Prophet (Aus) to follow.