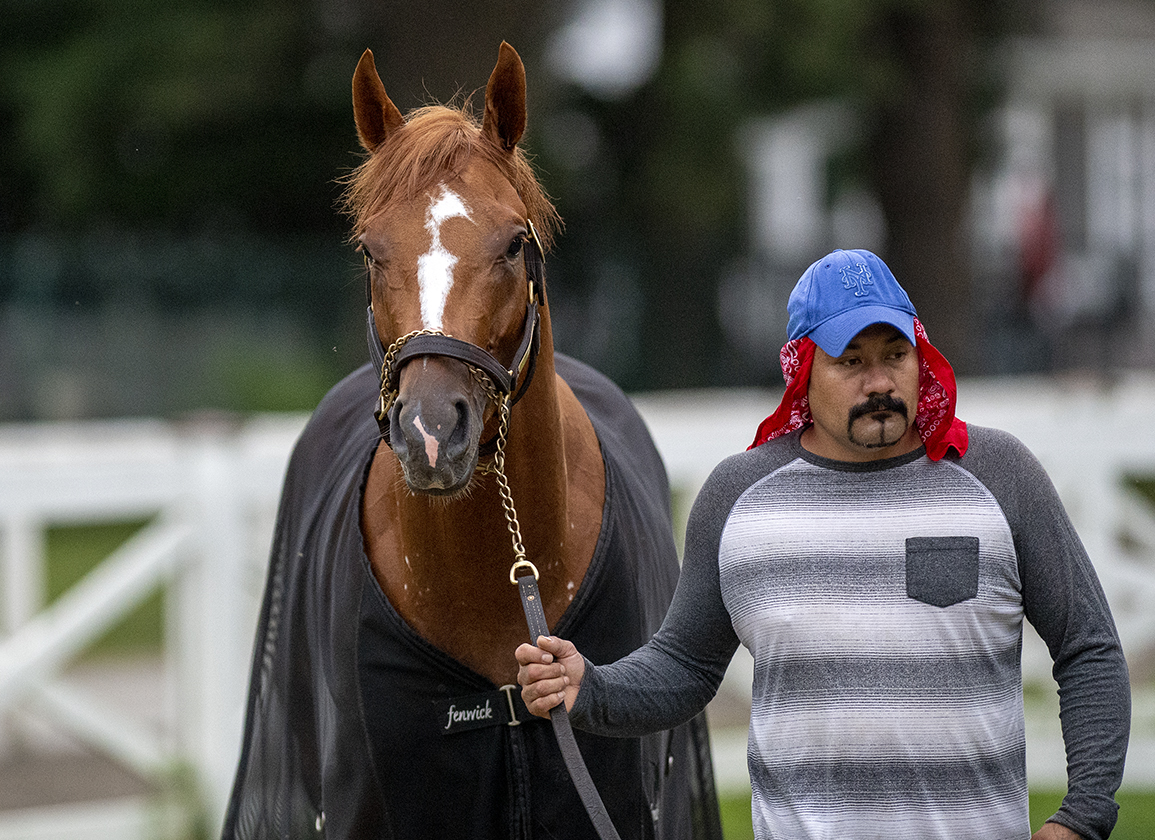 In his first start away from Belmont Park, the chestnut colt will face six other 3-year-olds in the 1 1/8-mile race that returns after being dropped from last year's COVID-19-scrambled season program. His competition includes GII Wood Memorial runner-up Dynamic One (Union Rags), who is making his first start since he was 18th in the GI Kentucky Derby; Susan Quick and Christopher Feifarek's prolific homebred Beren (Weigelia), already a five-time winner this year; and Juddmonte Farms' Snow House (Twirling Candy), who was third in the Dwyer.

Run the day before the GII Jim Dandy S., the local prep for the GI Runhappy Travers S., the Curlin has become an alternate steppingstone to Saratoga's signature race. Since it is restricted to runners who have not won a graded stake longer than one mile, it typically attracts late-developers–First Captain and three others debuted in 2021–or horses getting back into graded stakes company.

Though he has made but three starts, First Captain brings a solid reputation to the Curlin. Bred by Bobby Flay, he co-topped the 2019 Fasig-Tipton Saratoga yearling sale at $1.5 million. Flay is a partner in the ownership group of West Point Thoroughbreds, Siena Farm and Woodford Racing. He won his debut at seven furlongs on a fast track Apr. 24 and prevailed over a sloppy track May 29. McGaughey selected the Curlin instead of the Jim Dandy to give First Captain his first test around two turns and avoid GI Belmont St. winner Essential Quality (Tapit) until a possible matchup in the $1.25 million Travers.

“He doesn't need to meet him until it's a big day,” McGaughey said. “This was where I was pointing to after we won the allowance race. Then when the Dwyer looked like it was going to come up the way it did and then he had had a really good work the week before that, that's why we decided to go and take a chance. So now he's a graded stakes winner.”

In the Dwyer, First Captain made a wide run on the turn and went on to a 1 3/4-length victory, a performance that strengthened McGaughey opinion that he was a quality horse.

“I thought he ran really good,” McGaughey said. “It's not what he wants to do going a mile around one turn. The first two races it was kind of hard to tell because he made a few mistakes, but he didn't the other day. He was sitting in the right place, maybe a little farther back than I thought he would be, but it showed me that longer, two turns, is what he wants to do.”

McGaughey said the Curlin, with the added distance and the two turns, will be another challenge for First Captain.

“I think his races have all been good,” the Hall of Fame trainer said. “He's an easy horse to train. He's got a lot of composure to him. But he's got to prove that. It ain't nothing to prove in the morning; you got to see it in the afternoon. It's going to be a little bit deeper water this time, but the way he's been training since he got up here gives me the confidence that he's going to run a good race.”

Trainer Saffie Joseph said he thinks that 'Rising Star' Collaborate (Into Mischief), co-owned by Three Chimneys Farm and e Five Racing Thoroughbreds is ready to step back into stakes company. The Curlin will be his second start since undergoing a minor throat procedure to improve his breathing.

“He's a horse that trained, before he ever ran, like a really good horse,” Joseph said. “The first time he got beat. Then the second time he came back and won like the horse we think he was. We put him in the Florida Derby because he had showed that kind of talent. He traveled well and by the three-eighths pole he just kind of hit a wall. I don't think [a lack of] talent beat him on that day. I think more it was something to do with his air intake.”

After the colt finished more than 14 lengths behind Known Agenda (Curlin) in the GI Curlin Florida Derby, Joseph ran him back in the 6 1/2 furlong Roar S. He finished third as the 2-5 favorite and Joseph and his connections opted for the throat procedure. On June 20 at Gulfstream Park he won a one-mile comeback race by 5 1/4 lengths.

“For him, this is going to be the real test,” Joseph said. “I just need to see another race to make sure that it's legit as far as everything's functioning well. I know he has the ability, but you want to see it again. He has to prove it again before I can get total confidence.”

Dynamic One, bred by Phipps Stable, which is a partner with Repole Stable and St. Elias Stable on the colt, looked like he would win the Wood Apr. 3, but was caught at the wire by his longshot stablemate Bourbonic (Bernardini). In the Derby, he never was a threat after getting into some early traffic trouble. Trainer Todd Pletcher gave him a break after that and made the Curlin a target.

“We're optimistic,” Pletcher said. “I've seen stuff from him in the mornings that indicates he's capable of competing. Obviously, he just got beat in the Wood Memorial. At Churchill he didn't fire in the race. He's been a little bit inconsistent, but we've seen potential from him at times.”

Snow House started his career on turf Mar. 20 at Fair Grounds, but got away slowly and ended up fourth. When Snow House's second race was moved off the wet Keeneland turf Apr. 21, trainer Brad Cox left him in the field and he led from gate to wire.

Beren, a Pennsylvania-bred, has won three in a row–two of them in laughers in off-the-turf races–since stumbling at the start and finishing fourth in the GIII Bay Shore S. Apr. 3. The Butch Reid trainee prepped for the Curlin with a bullet half-mile work in :46 3/5 (1/87) here July 23.

Chad Brown will saddle Miles D (Curlin), a maiden winner co-owned by Peter Brant and Robert LaPenta, who drew the rail. Harvard (Pioneerof the Nile), trained by Rodolphe Brisset for China Horse Club and WinStar Farm, finished second in his first two career starts. Since blinkers were added he has shown early speed and won both starts.