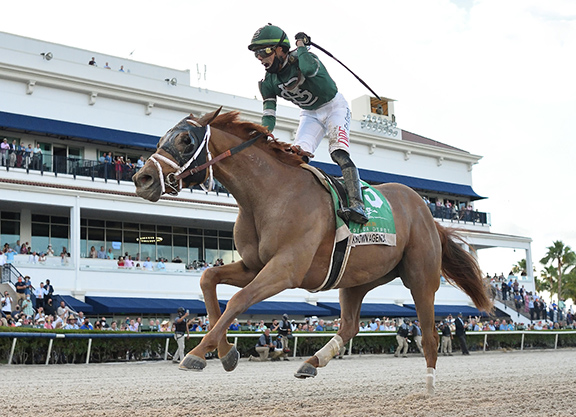 “It has so many great meanings, but for me what is so special about this is to win it for St Elias with a horse that they bred,” Pletcher said. “I know how much that means to them, that makes it a little more extra special for us.”

The 5-1 shot saved all the ground early in a midpack fifth through fractions of :23.43 and :47.73. With Irad Ortiz, Jr. aboard, he traveled kindly in some traffic approaching the three-furlong marker, tipped out for clear sailing at the top of the lane and kicked away once switching over despite some drifting in the stretch to score by an expanding 2 3/4 lengths over longshot Soup and Sandwich (Into Mischief).

The streaking odds-on Greatest Honour (Tapit) favorite, winner of the GIII Holy Bull S. and GII Fasig-Tipton Fountain of Youth S., never really threatened while third. “I thought we were OK on the turn there and he just didn't kick on the way I thought he would,” trainer Shug McGaughey said.

As for the winner, Pletcher said, “I was really pleased with the progress he was making up the backside because one of the things we were a little bit worried about was if he got stuck inside, he didn't seem to handle that in [last December's GII] Remsen very well. When he was making progress up the backside and picking off horses while he was inside and behind horses, I had a pretty good feeling at that point that he was running his race today and that it was a matter of finding out how good he is.”

Known Agenda, a narrow and ultra-game maiden winner over Greatest Honour in a key heat at Aqueduct last November, closed out his juvenile campaign with a well-beaten third at a well-backed 9-5 in the GII Remsen S. A disappointing fifth from well out of it as the 3-2 favorite while kicking off his sophomore campaign in Tampa's GIII Sam F. Davis S. Feb. 6, he looked like a new horse with blinkers added and first-time Lasix last time, airing by 11 lengths in a track-and-trip optional claimer Feb. 26.

“We were looking for a couple of things in that last race,” Pletcher said. “One, to see if blinkers made an improvement in his being a little more tactical and secondly, we wanted to see how he handled the Gulfstream surface. I thought we got very good answers to both of those questions. The only thing was we were taking a fairly significant step back in class. It wasn't an overwhelming field, but the way he did it, to win by 11 anytime in a race like that, and [jockey] Irad [Ortiz Jr.] kind of wrapped up on him the last part, I thought it was not only an impressive race but a step in the right direction. It showed us that the blinkers helped and that he handled Gulfstream.”

Ortiz Jr. set the single-season Championship Meet win record in style with his victory aboard Known Agenda in the Florida Derby.

“It means a lot,” Ortiz Jr. said. “We work so hard. It feels so good to get the feedback from the owners and the trainers. They support me. I say thanks to all of them.”

Known Agenda, a $135,000 RNA as a FTSAUG yearling, becomes the 77th black-type/38th graded winner for the mighty Curlin. He is the 13th Grade I winner for Hill 'n' Dale Farms's leading sire. Pletcher also trained Curlin standouts such as: Vino Rosso, Palace Malice, Curalina, Off the Tracks, et al. “To be honest, he's a horse that reminds us a lot of Vino Rosso,” Pletcher said of the 2019 GI Breeders' Cup Classic winner. “Personality-wise, obviously being a chestnut son of Curlin, but he's taken a little while to kind of put everything together. We kept seeing talent in the mornings that he wasn't necessarily displaying in the afternoon but we knew it was there.” Byrama–heroine of the 2013 GI Vanity H. for Eclipse Thoroughbred Partners and Simon Callaghan–was acquired privately by St Elias after RNA'ing for $725,000 at that fall's KEENOV sale, and made six more starts the following season for Bill Mott. Byrama is also represented by the 2-year-old filly Breeze Berry (Bodemeister) and an Always Dreaming filly of 2020. She was bred to Kitten's Joy for 2021. Vinnie Viola showed plenty of support for Curlin at last year's KEESEP sale. Along with Mike Repole, Gainesway, John Oxley and Grandview, St. Elias purchased a $1.2-million yearling son of Curlin-Midnight Lucky. St. Elias and Repole, the team behind the aforementioned champion older male Vino Rosso, also partnered up on four additional colts by Curlin for $475,000, $400,000, $350,000 and $250,000.