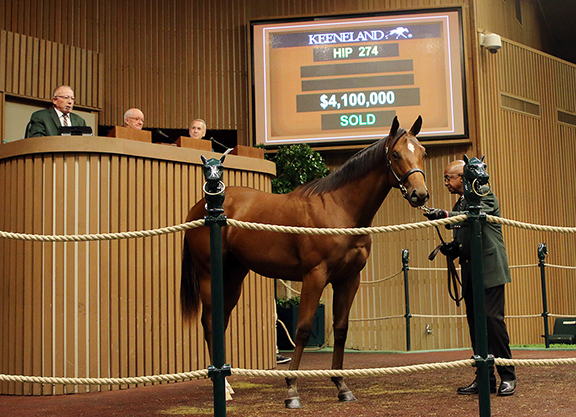 A Stonestreet-bred Curlin colt out of New Zealand champion and G1SW Bounding (Aus) (Lonhro {Aus}) dropped jaws at Keeneland September Tuesday when selling for an eye-popping $4.1 million to Godolphin as Hip 274. From the eight-figure-earning superstar Hill 'n' Dale sire, the bay, consigned by Eaton Sales, Agent for Stonestreet Bred & Raised, is the first foal from Bounding, who won six group stakes in the Southern Hemipshere and is herself a half-sister to G1SW Anthony Van Dyck (Ire) (Galileo {Ire}). She was purchased by Stonestreet for A$1.9 million in 2016. Second dam Believe'n'succeed (Aus) (Exceed And Excel {Aus}) is a group stakes winner and full-sister to MGSW Kuroshio (Aus).