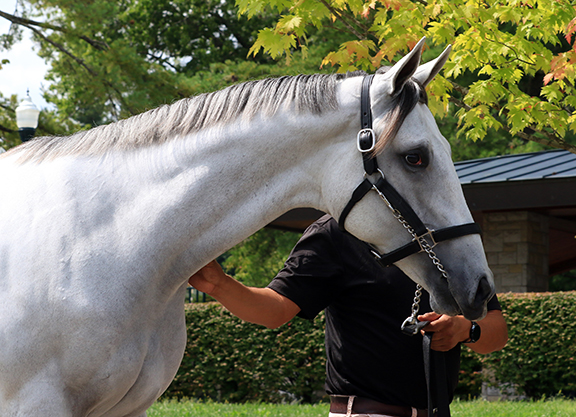 A colt by Curlin has no shortage of new owners after Gainesway's Alex Solis signed the ticket on hip 282 at $1.2 million Monday at Keeneland. The new partnership includes Mike Repole, Vinnie Viola's St. Elias, Gainesway, John Oxley and Robert Clay's Grandview.
“We've been talking about all the colts we liked and I really liked this colt,” Solis said after signing the lengthy ticket. “I thought his mother was a pretty special filly. All week long I kept seeing him and thought I'd like to find a way to take a piece of this colt.”
The gray colt is out of multiple Grade I winner Midnight Lucky (Midnight Lute) and was co-bred by Hill 'n' Dale Farm, Mike PEgram, Karl Watson, and Paul Weitman. The mare was trained by Hall of Famer Bob Baffert, who was an interested observer while standing out back as the bidding escalated.
Pegram purchased Midnight Lucky for $220,000 at the 2011 Fasig-Tipton Saratoga Sale. She went on to win the 2013 GI Acorn S. and 2014 GI Humana Distaff S. for Pegram, Watson and Weitman. The 10-year-old mare produced a filly by Curlin this year and was bred back to Triple Crown winner Justify.
Solis did his bidding while standing in the doorway of the sales pavilion and surrounded by a crowd which included Gainesway owner Antony Beck, Clay and trainer Todd Pletcher.
“I thought he'd be somewhere around there,” Solis said of the colt's final price. “I didn't know where. In this market, it's kind of who you run into.”
Asked if the purchase was made considering a future stallion career for the yearling, Solis said, “Oh yes. When you pay that much money, you're hoping it's multiples if they hit.”