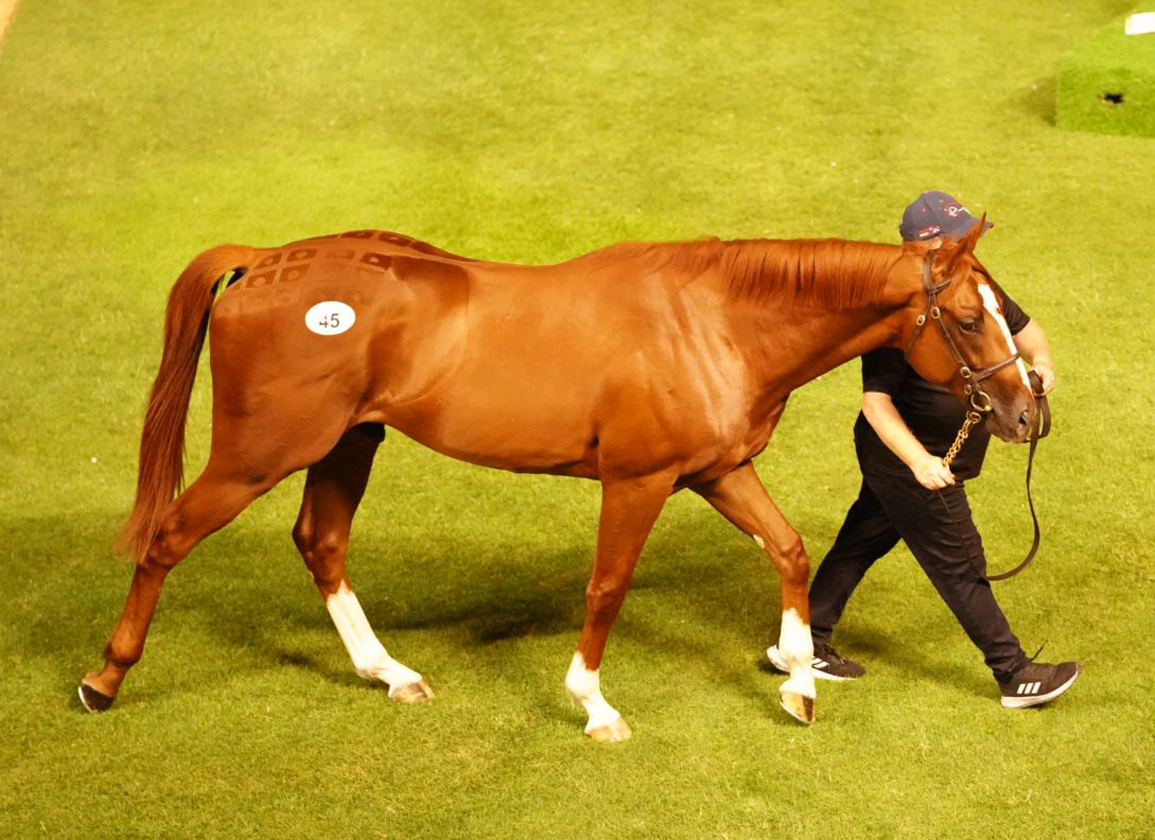 Lot 45, a colt by Curlin, topped the sale | RVN Management

DUBAI, UAE–A sale hosted at Meydan just a few days in advance of the Dubai World Cup meeting always promised to have an international feel to it, and though many of the 2-year-olds purchased at the inaugural Goffs Dubai Breeze-up Sale will remain in the Middle East, others will head to Japan and back to Europe as they head into training.

“A first for Dubai and a first for Goffs,” said Goffs Group Chief Executive Henry Beeby, as the initial batch of horses was ushered into the parade ring before a large crowd gathered around the paddock restaurant.

The evening's top lot (45), a colt by Curlin, began life in Kentucky before being bought at Keeneland from Denali Stud for $150,000 and travelling to Ireland to Tom Whitehead's Powerstown Stud. He is now likely to remain in Dubai after Mohammed Al Subousi went to AED2,500,000 (€619,808) to secure the son of the dual winner Saucy Dame (Distorted Humor). The Dubaian owner will be represented on Saturday in the G1 Dubai Golden Shaheen by the well-bred Eastern World (Ire), a Dubawi (Ire) half-brother to dual G1 Dubai World Cup winner Thunder Snow (Ire) (Helmet {Aus}).

“That was beyond my expectations,” said Whitehead. “We've had a very good sale. He was just a bit babyish when we bought him but he matured into a lovely horse.”

He added of the breeze, in which the horses were asked to stretch out at a steadier pace than is the norm at breeze-up sales, “This is much easier for us because you can get the horses here in one piece and hopefully they will train on. I think it's a very good idea. If you're buying a classy horse like that you don't want them doing 10-second furlongs.”

Whitehead's shopping trip to Keeneland last September proved to be a fruitful one as he also sold lot 59, bought for $110,000 as a yearling, to Prince Faisal Khalid Bin Abdulaziz for AED2,000,000 (€495,846). The son of Mo Town is out of Tizza Trick (Tiznow), a half-sister to GIII Bashford S winner Exfactor (Exchange Rate).

The second-most expensive colt of the sale will be heading to Japan for his racing career after Hirokazu Okada of Big Red Farm gave AED2,100,000 ($520,638) for lot 30. The only son of Frankel (GB) in the catalogue, he is a half-brother to the Group 3 winner Lily's Angel (Ire) (Dark Angel {Ire}) and listed victrix Zurigha (Ire) (Cape Cross {Ire}).

“He has to go to Europe for 60 days before he can go to Japan,” Okada explained. “We like Frankel and he was a very masculine colt and a good walker.”

Bred by Nick and Alice Nugent, the son of the unraced Noyelles (Ire) (Docksider) from the family of the George Strawbridge-bred Group 1 winners We Are (Ire), Call The Wind (GB) and With You (GB), was sold for €360,000 as a foal at Goffs to Oneliner Stables. Unsold when offered at the yearling sales, he was then prepared as a breezer by Church Farm & Horse Park Stud.

John Cullinan, one half of the consigning duo with Roger Marley, said, “We've had a marvellous night. We've sold a Tapiture and a Mastery well, so we've been very lucky, and then to have this horse.”

He continued, “Some friends of ours bought him as a foal so there was a lot of pressure, but he's a marvellous horse. They weren't expecting a rocket type–these are next year's horses, and we've trained him accordingly. He did very little galloping, Roger Marley looked after all of that, but this horse was just naturally talented and he has improved physically.

“I'm all for anything that will bring new money into the sport, and fair play to Goffs and the Dubai Racing Club to establish this. It's another dimension to the whole season and they have been fantastic hosts. They have looked after us so well. There's a great crowd here.”

“He's for an existing client,” said Doyle of the Aguiar Bloodstock consignee. “He's a lovely colt with a very nice pedigree and he breezed particularly well. He may stay here but there's a chance he'll go back to Europe–a good chance, I'd say.”

The colt was bought by Robson Aguiar and Amo Racing for 110,000gns at Tattersalls October Book 1.

Scottish-born owner Dr. Jim Hay, a full-time resident of Dubai, made a little piece of bloodstock history as the successful bidder on the first lot through the ring. The colt by Gun Runner out of the dual Grade II winner Bank Audit (Wild Rush), already the

After his agent Alex Cole had signed for the colt, Dr. Hay said, “I think the sale is a brilliant concept and I know it's something that Goffs have been hoping to do for a while. The horse has a lovely pedigree. We're looking for horses who will go on the dirt in Dubai. We bought three in Ocala last week to go to Bhupat Seemar and he will train this horse as well.”

Lot 1 was offered by Mickey Cleere of MC Thoroughbreds, who understandably expressed relief at a positive start to his breeze-up season. After the colt was unsold at $70,000 at Fasig-Tipton last October, he was bought privately for $50,000.

“I was a bit worried about being the first lot in but that's a lot of money,” said Cleere. “We certainly bought him with this sale in mind and we were after one of those fashionable pedigrees.”

The colt is from the second crop of Breeders' Cup Classic winner Gun Runner, who was also runner-up to Arrogate in the Dubai World Cup of 2017.

Towards the end of the evening Cole and Hay later returned to the MC Thoroughbreds draft to buy a filly by Into Mischief out of the Grade III winner Ageless (Successful Appeal) (lot 67) for AED1,600,000 (€396,677).

The progeny of Dubawi (Ire) have posted some pretty impressive results at Meydan over the years and his sole juvenile in the sale, a filly out of the listed winner Joyful Hope (GB) (Shamardal), was bought by Yousuf Salem Saeed Saqer Al Kaabi for AED1,400,000 (€347,092).

Malcolm Bastard, who consigned lot 24 for her breeders Lord and Lady Lloyd Webber of Watership Down Stud, said, “We are pleased with the price, which is only the price of the nomination and keep, and we hope she's very lucky for the people who race her.

“I was a bit nervous coming in but it has worked out well. We were told to breeze at a three-quarter pace and that's what we did.”

Reflecting on the inaugural Dubai Breeze Up Sale, Goffs Group Chief Executive Henry Beeby said, “The first Dubai Breeze-Up Sale has laid the most solid foundations for future evolution following a vibrant evening in the winner's enclosure at the iconic Meydan racecourse.

“Goffs would like to thank the Dubai Racing Club for the trust and confidence placed in our service and we salute the vision of HH Sheikh Mohammed in adding the sale to this amazing weekend of racing. The Dubai World Cup is the focal point of the racing and bloodstock world this weekend and the global appeal of Dubai was clearly reflected in the international nature of the list of buyers who literally travelled from every corner of the world.

“We have learned a huge amount in our first year and look forward to growing the sale in future years with the Dubai Racing Club. It was some evening, some privilege, and some atmosphere.”