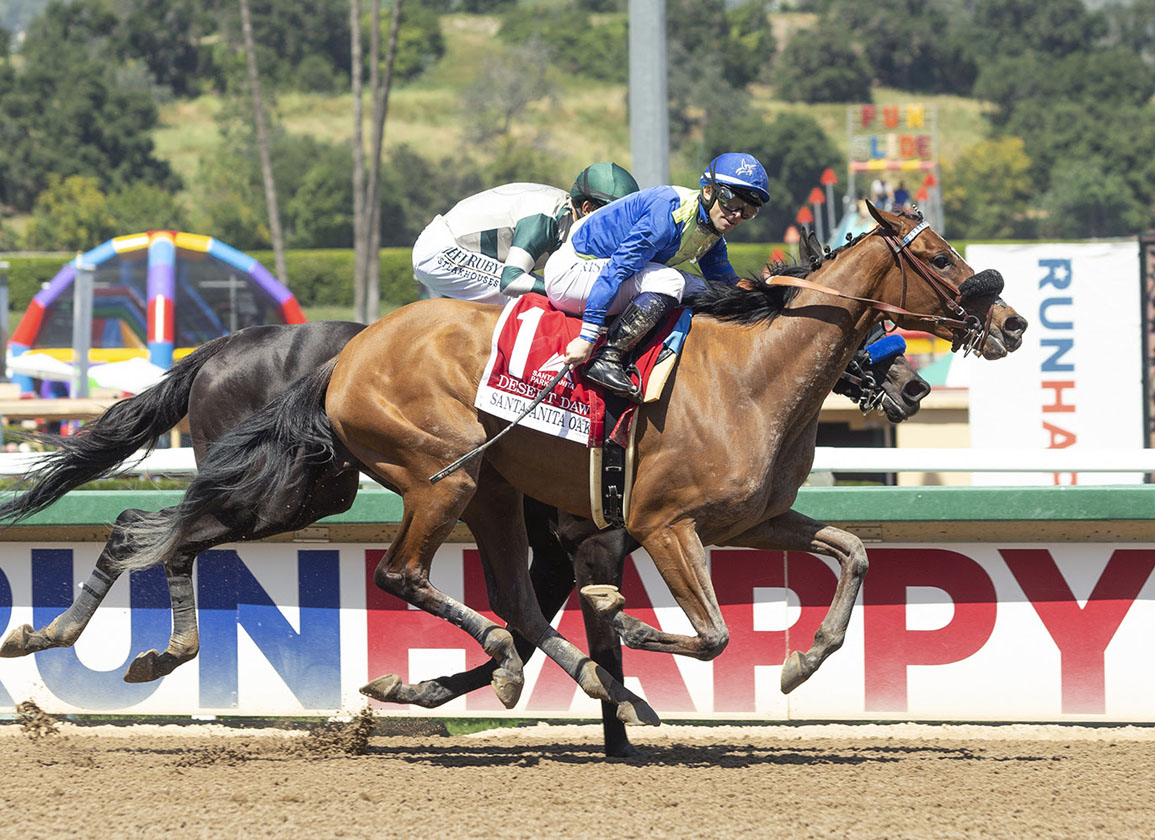 While Saturday's GII Santa Anita Oaks seemed all but a procession for 13-length GIII Las Virgenes S. romper Adare Manor (Uncle Mo) in her first start since being transferred from Bob Baffert to Tim Yakteen, Desert Dawn (Cupid)–the longest shot in the field of five at higher than 14-1 odds–had other ideas. Desert Dawn broke well from the fence before tucking in to sit third as her seemingly much more formidable stablemate Ain't Easy (Into Mischief) set off to show the way with the imposing presence of Adare Manor looming to her outside. The leading duo opened several lengths on their competition down the backside through splits of :23.05 and :46.46. Adare Manor quickly went from looking like a sure thing to in deep water as pilot John Velazquez hit the gas but seemed to not quite find the response he was looking for. Desert Dawn then ranged up to join the others three deep, and kicked clear in upper stretch. Adare Manor found more to battle back through the stretch, but she could never quite regain her momentum and Desert Dawn crossed the wire a neck to the good. Ain't Easy checked in a distant third.

“I have been working this horse.  I knew this filly was better than that last year,” said winning pilot Umberto Rispoli. “I knew we needed that last race and I felt the last work (6f, 1:13.40, 1/4) was better than shown. I just wanted to keep her outside and I knew the pace would set up really well for her. We started to move at the 3/8 pole and she fought every step of the way.  She gave me the Santa Anita Oaks and now it is on to Kentucky!”

A second-out graduate going a mile at Del Mar last August, Desert Dawn was third in October's GII Chandelier S. behind Ain't Easy over track and trip before checking in last of sixth behind Echo Zulu (Gun Runner) in the GI Breeders' Cup Juvenile Fillies Nov. 5. She was fourth to the Baffert-trained Eda (Munnings) in both the GI Starlet S. at Los Al Dec. 4 and again in the local GIII Santa Ysabel S. Mar. 5.

“She's an honest filly,” conditioner Phil D'Amato said of the winner, who earned 100 Kentucky Oaks qualifying points. “I always thought once she'd get her scenario it'd work out for her, and I think the longer the better. Umberto's been breezing her and her last drill was probably her best drill to date, so it all worked out.”

Pedigree Notes:
Desert Dawn is the second graded stakes winner, and one of four black-type scorers, from her sire (by Tapit)'s first crop. Honour and Glory is the broodmare sire of 35 graded/group winners, including MGISW West Coast (Flatter) and blue hen Justwhistledixie (Dixie Union).

A rare Arizona-bred to compete at the graded level, Desert Dawn is out of a mare who was a five-time winner at Finger Lakes. Ashley's Glory's last listed foal is a yearling filly by Mineshaft.