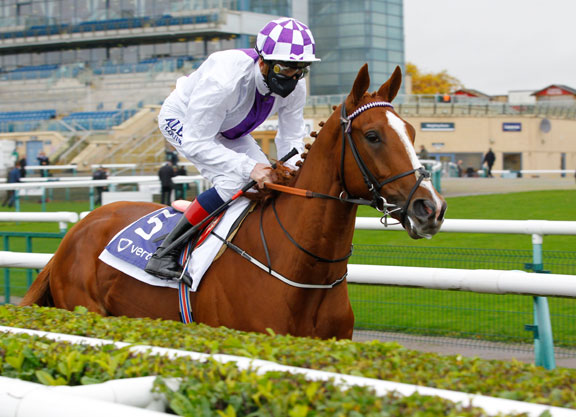 Leopardstown's G3 Derrinstown Stud Derby Trial has a considerable reputation as one of the leading preps for Epsom's blue riband, so it is a surprise that no horse since 2002 has won both this 10-furlong contest and the English Classic. That could change this year, with the current Derby looking a wide-open affair at present and Jim Bolger holding the aces in the 3-year-old colt department. Fresh from winning the G1 2000 Guineas with Poetic Flare (Ire) (Dawn Approach {Ire}) last Saturday, the master of Coolcullen saddles Mac Swiney (Ire) (New Approach {Ire}) on Sunday and all eyes will be on how the G1 Futurity Trophy hero shapes on his return at a trip that should bring out further improvement in him. There is reportedly nothing between Mac Swiney and Poetic Flare and the fact that the latter is staying at a mile for now makes the placing of his star colts all the easier. “Mac Swiney will be running over a mile and a quarter at Leopardstown and we'll take it from there,” he said. “He'll go on any ground.”

Ballydoyle's 'TDN Rising Star' Bolshoi Ballet (Ire) (Galileo {Ire}) beat fellow Bolger representative Flying Visit (Ire) (Pride of Dubai {Aus}) in the G3 Ballysax S. over this course and distance Apr. 11 and leads Aidan O'Brien's challenge for a 14th renewal. “It was always the plan to go for the Derrinstown after he won the Ballysax,” he said. “Everything has gone well with him since and he seems to be in good form.” Third in the Ballysax, Fiona Carmichael's Taipan (Fr) (Frankel {GB}) holds the fourth-placed Lough Derg (Ire) (Galileo {Ire}) on that form while Joseph O'Brien puts forward Aquis Racing and Al Mamoura Partnership's Apr. 14 course-and-distance maiden winner Southern Lights (Ire) (Sea the Stars {Ire}). “Southern Lights is a gorgeous horse that we've always had high hopes for,” he said. “He is a very laid-back character and he seemed to wake up as the race progressed last time. This is obviously a huge step up in class for him, but he has earned the chance to be tested in a race like this and we can't wait to see how he measures up.”

Also on the card is the G3 Amethyst S. and G3 Irish 1000 Guineas Trial over a mile, with the latter playing host to the Joseph O'Brien-trained Sense of Style (Ire) (Zoffany {Ire}) who bids to build on her return third in the seven-furlong G3 Ballylinch Stud 1000 Guineas Trial on Apr. 11. “She had to contend with plenty of traffic to deliver her challenge that day and stepping up back to a mile will be a help to her,” her trainer said. “There should be improvement to come in fitness terms and I'd be hopeful that she'll run a big race.” Also in the mix are Juddmonte's Apr. 14 course-and-distance maiden scorer Acanella (GB) (Dansili {GB}) and The Aga Khan's Shandra (Ire) (Sea the Stars {Ire}), who has not been seen since making a winning debut over seven furlongs at The Curragh in August.