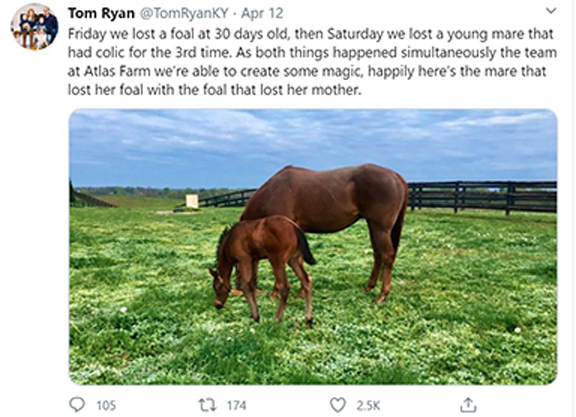 They say that every cloud has a silver lining. For SF Bloodstock’s Tom Ryan, it was a very dark cloud.

Last Friday, SF lost a foal at 30 days old. Then the next day, a young mare passed away after suffering from colic for the third time, leaving behind an orphaned foal.

“Even when you know it’s for all the right reasons, I promise you it’s always a difficult call to euthanize any animal,” Ryan said. “The ripple effect across a farm afterwards is immense, but without exception the show must go on. Nature waits for nothing.”

SF Bloodstock, a prominent investor in the industry for over a decade, has boarded with Conor Doyle and Neal Clarke’s Atlas Farm almost since its inception.

Ryan spoke highly of the care the SF band has received from the Atlas team.

“We are so fortunate to have our horses under the care of Atlas Farm,” he said. “The endless enthusiasm and dedication that this team of horsemen and horsewomen show day in and day out is inspiring. It’s like they have a sworn oath of allegiance to these animals.”

With this commitment to put the horse first, Atlas was not going to sit idle with an orphaned foal and a foal-less mare on the line.

As Ryan penned in a Tweet, “The team at Atlas was able to create some magic.”

This week, the orphaned foal was united with the mare, and the duo now share the same close-knit connection as any blood-related mare and foal.

“The team at Atlas are experts when it comes to fostering animals,” said Ryan. “This wasn’t a first for them, and unfortunately it won’t be a last. They aim to make it as stress-free as possible for both animals. They told me that this fostering process was seamless and the two bonded very smoothly.”

The foal is a filly from the second crop of Claiborne’s Mastery. She continues to grow and settle in with her new mother. Ryan said he is already looking forward to offering her as a yearling at a sale next year.

As for the mare, she is thriving as she fulfills her motherly duties.

“This mare has produced a filly that went on to win a few Grade I races, so clearly she’s pretty good at her job,” said Ryan.

Based on the thousands of likes Ryan’s tweet received, people were touched by the uplifting story. But Ryan said that moments like these happen on a daily basis.

“There’s no doubt that Atlas conjured up some magic this past weekend,” said Ryan. “But there are millions of stories across the globe every day of people giving their all to see these wonderful animals get the very best of everything.”

During this time of uncertainty, Ryan encouraged the industry to use stories like this to band together.

“Our industry needs leadership now more than ever,” he said. “These are trying times for everyone. Everyone assumes that someone else is steering the ship, and there’s nobody at the helm. This is a great time for us to decide what we want from the industry going forward.”