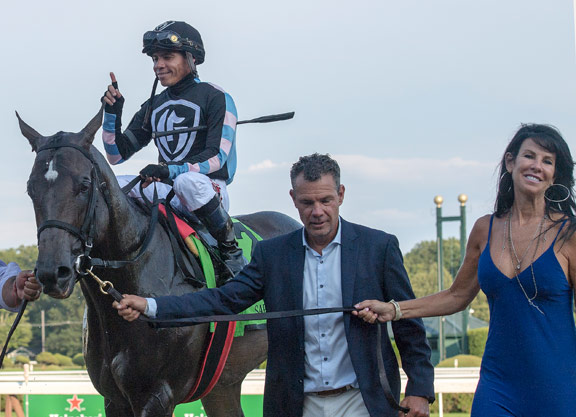 SARATOGA SPRINGS, N.Y.–Everyone in racing knows how hard it is to win a race at Saratoga, never mind a Grade I and, despite spending most of their equine careers in the Standardbred industry, Michelle and Al Crawford are no exception. They found themselves in the spotlight on one of racing’s biggest stages pretty early on in their careers as Thoroughbred owners, winning Saratoga’s GI Alfred G. Vanderbilt S. with El Deal (Munnings) in 2017, just two years after purchasing their first Thoroughbreds. The Crawfords have a good chance to win their second Grade I at the Spa Saturday when Shancelot (Shanghai Bobby) heads to the post for the GI H. Allen Jerkens Memorial S.

“We didn’t really expect it then,” Michelle Crawford said, reflecting El Deal’s win. “I know how hard it is to just hope to get a Grade I winner, especially at Saratoga. We are just counting our lucky stars at this point to be in the game at this level. It has been a little bit of random luck, as you know.”

Longtime Standardbred owners and breeders, the Crawfords run Crawford Farms in Durhamville, N.Y., which was founded by Al Crawford’s parents in 1966. The owners and operators of Bankers Healthcare Group initially got started in Thoroughbreds with two yearlings they purchased at Fasig-Tipton’s Saratoga Select Sale four years ago and then decided maybe the claiming game would suit them.

“We have a home in South Florida, so Al was like, ‘Maybe we should look into some claimers, something to have fun so we could go over to the track,'” Crawford said. “Ours [Standardbreds] race every single week and it was kind of hard when we first started racing Thoroughbreds. We were like wait, there is sometimes four, five, six weeks, maybe longer between races. We were introduced to Jorge and we said we wanted to try and get into it a little bit, try some claimers and flip them.”

Al Crawford attended the 2-year-old sales with Jorge Navarro, who trained El Deal, last year and ended up buying a few, as well as partnering with Gelfenstein Farm’s Ivan Rodriguez on a Shanghai Bobby colt, who turned out to be Shancelot.

“Everybody wants a Kentucky Derby horse,” Michelle Crawford said. “Who doesn’t dream about that, right? My husband went to the 2-year-old in training sale and bought four or five with [Navarro]. We came in as a partner on Shancelot. We didn’t really know at that point that we had anything.”

She added, “We had the success with El Deal which was super fun, but it is so hard to find horses like that. We have just been blessed since then. We also have a couple of 2-year-olds in training right now that [Navarro] really likes that we own 100%. We have been bitten by the bug and we are learning more and more. It is trial and error. It has just been a fun ride.”

Purchased for $245,000 at OBS March after breezing in :9 4/5, Shancelot won on debut at Gulfstream Feb. 16 and followed suit with a dominant optional claiming score at Monmouth Park June 23. Favored in a large field in Saratoga’s GII Amsterdam S. July 28, the bay ran to the money, cruising home to an ultra-impressive 12 1/2-length victory (video).

“I really was blown away,” Crawford said. “We were hoping he would go out there and put a good effort in. Jorge felt really, really good about the horse. We did everything right by him by not over-racing him. I think he is just a really special horse.”

Shancelot will face some new rivals in Saturday’s test, including Grade I winners Mind Control (Stay Thirsty) and Hog Creek Hustle (Overanalyze), but he will likely be the heavy favorite off his devastating performance last out.

“I’m super nervous,” Crawford said about the Allen Jerkens. “No one wants to talk about it. They are animals and there are a lot of elements that go into getting them out of the gate. We have a huge fan club coming to cheer him on. It is nerve wracking, but it is exciting nerve wracking.”

She continued, “This year we had the world’s fastest trotter Homicide Hunter. We also have [the filly] Atlanta, who won the Hambletonian [last year] and won the Futurity. To have Shancelot, is kind of just this surreal thing that is going on. Somebody pinch me!”

The Crawfords are very active in the Standardbred industry. In addition to their 400 horses, which are a mix of racing and breeding stock, as well as retirees, they sponsor some of the country’s biggest harness races and make an effort to bring more fans to the game.

“We are constantly trying to evolve and promote our sport,” Crawford said. “We are super active in our sport. We are a huge sponsor of the Meadowlands Pace, the Crawford Farms Trot. We participate and do a lot of sponsorships in our industry. Hopefully, we find a comfortable home in the Thoroughbreds, since this is new.”

The couple are not only trying to find their niche in Thoroughbred racing, but are also trying to transition some of what they have seen in this industry to the world of harness racing.

“There is such an excitement with the crowds in Thoroughbreds that Standardbreds just don’t have,” Crawford said. “I think we have always looked at how we can transition and find the same type of fan. We have been working on the crossover and getting participation in both. There is such a thrill about the Thoroughbreds and there are just so many people that follow them. Obviously, the handle is a big deal. You have to have bettors to have a great sport. I wish we had more of that in the Standardbreds and we are working on evolving that.”