Cox Plate Next For Criterion 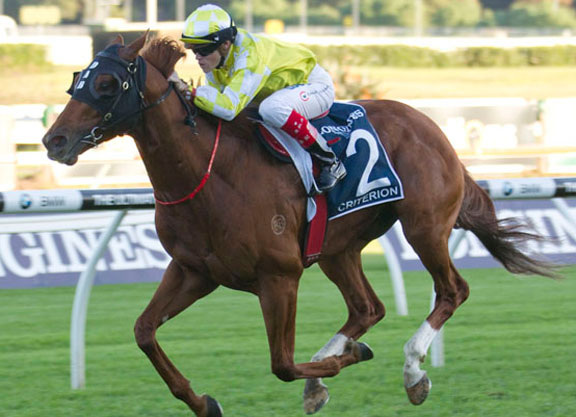 Despite only finishing sixth of the seven runners in Wednesday’s G1 Juddmonte International at York, Australian trainer David Hayes has expressed his satisfaction with Criterion (NZ) (Sebring {Aus}) and believes the colt will still be a force to be reckoned with back in Australia in the G1 Cox Plate.

In Hayes’ opinion he feels the horse could have raced closer to the speed and he commented, “We were further back than we wanted–it’s probably cost him running fourth. He put himself into the race, it was a bit like his Ascot run, really, in a better race than Ascot.” Criterion was beaten just a little over five lengths in total behind the shock winner Arabian Queen (Ire) (Dubawi {Ire}) and Hayes feels the race will have played a part in bringing the triple Group 1 winner back to his peak for a second shot at the race in Moonee Valley in October.

“It’s straight back for the Cox Plate. We needed to have a race to have an English prep going into it. I think it’s a very good lead-in to the Cox Plate,” added Hayes.