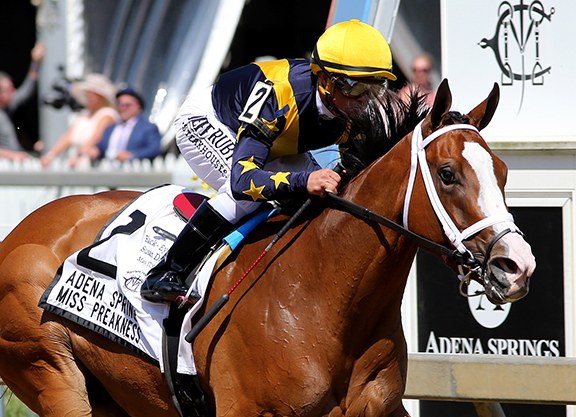 Covfefe (Into Mischief) flashed her brilliance during her dominant debut win in 2018, but proved to be a forced to reckoned with on the female sprinter circuit in 2019, as well as the best 3-year-old filly of the year. Opening her sophomore account with a facile optional claimer score at Keeneland in April, the flashy bay set a new track record when romping by 8 1/2 lengths in Pimlico's GIII Adena Springs Miss Preakness S. May 17. Third behind Grade I winner Mia Mischief (Into Mischief) when facing her elders in the Roxelana S. at Churchill Downs June 22, the $250,000 KEESEP buy rebounded with a gutsy defeat of GI Kentucky Oaks victress Serengeti Empress (Alternation) in Saratoga's GI Longines Test S. Aug. 3. Making a mockery of the Dogwood S. field with an effortless eight-length victory Sept. 21, Covfefe ran to the money in the GI Breeders' Cup F/M Sprint, holding off a late run from fellow sophomore Bellafina (Quality Road) to win by 3/4 of a length. It was another 7 3/4 lengths back to the third-place finisher.

Covfefe, who is famously named after a Donald Trump tweet, was given a brief freshening following her win at the World Championships. She returned to trainer Brad Cox at his Fair Grounds winter base last week to prepare for her 4-year-old campaign.

“On behalf of my wife Nanci and my daughter Jaime, we would like to thank the NTRA, the Daily Racing Form and the National Turf Writers and Broadcasters Association for recognizing and acknowledging the outstanding achievement of Covfefe. Her 2019 campaign included her breaking the Pimlico track record in the Miss Preakness by two seconds; winning the fastest Test at Saratoga in over 20 years; breaking the Dogwood S. record at Churchill Downs held by our very own Super Majesty by over two seconds; and culminating the 2019 year by being the first to win the Breeders' Cup Filly and Mare Sprint from post one and just the second 3-year-old to win this most prestigious race. This would not be possible without the incredible team we have assembled over the years. Most importantly, I must thank our incredible filly Covfefe, who did everything that was asked of her, and all of her fans who follow her everyday on Twitter. As CNN said on their five-minute segment they did on Covfefe after winning the Breeders' Cup, the world now knows who is the real stable genius.” —Larry Roth of LNJ Foxwoods

Mitole (Eskendereya) was a dominant force in the male sprint division in 2019, capturing six of his seven starts, including four wins at the highest level. Kicking off the year with a decisive optional claimer score at Oaklawn Mar. 2, the $20,000 KEESEP yearling turned $140,000 OBSAPR juvenile scored a facile victory in that venue's GIII Count Fleet Sprint H. next out Apr. 13. Registering his first top-level success in the GI Churchill Downs S. on the GI Kentucky Derby undercard, the fleet-footed bay followed suit with an impressive defeat of McKinzie (Street Sense) and Thunder Snow (Ire) (Helmet {Aus}) when trying a mile for the first time in Belmont's prestigious GI Metropolitan H. June 8.

Mitole suffered his first loss of the season at the hooves of the “Little Rocket” Imperial Hint (Imperialism) when third in Saratoga's GI Alfred G. Vanderbilt S. July 27, but returned to winning ways with a three-length score in the Spa's GI Forego S. Aug. 24, setting a new stakes record in the process. The Heiligbrodt colorbearer reeled in the ultra speedy sophomore Shancelot (Shanghai Bobby) in the stretch of the GI Breeders' Cup Sprint at Santa Anita Nov. 2, cementing his status as the nation's top sprinter. He was retired to Spendthrift Farm following the World Championships and will stand his first season for $25,000.

“This is a wonderful award, my family appreciates it very much. It's been a long journey for us. Coming from Texas, where horses are a part of life, I'd just like to say that Corinne and I believe that what makes horses are the people that touch them. Mitole's life started with Ed Cox, the breeder, then Bill Landes at Hermitage Farm, who I believe thinks he might have been the fastest horse ever there. To David McKathan, who started this horse as a 2-year-old and probably is more responsible for us owning this horse than anyone else. Susan Montanye who took this horse as a 2-year-old. He wasn't a perfect gentleman when he got there, but he was when he left. And the 'A Team'–Steve Asmussen, Scott Blasi and Darren Fleming, who Corinne and I won more races with than I could have imagined. Nobody could have or would have trained Mitole than Steve Asmussen–he's the best. Spendthrift purchased the stallion and he's on to a new career. And finally my granddaughter, she's holding the trophy here, she went to Spendthrift and picked the stall Mitole would live in for the rest of his life. It's a family situation, we thank you and I promise you one thing–you'll see orange and white on a 2-year-old by Mitole at Keeneland in April 2023, I promise you that. Thank you, Mighty Mitole.” —Bill Heiligbrodt, co-owner

“We always liked him. We had him in a 2-year-old in training sale and he worked dynamite [:10 flat] and galloped out big. We thought he was a pretty nice horse. We actually recommended him to all of our top clients.” —David McKathan of Grassroots Training & Sales, who broke Mitole and sold him at OBS April.