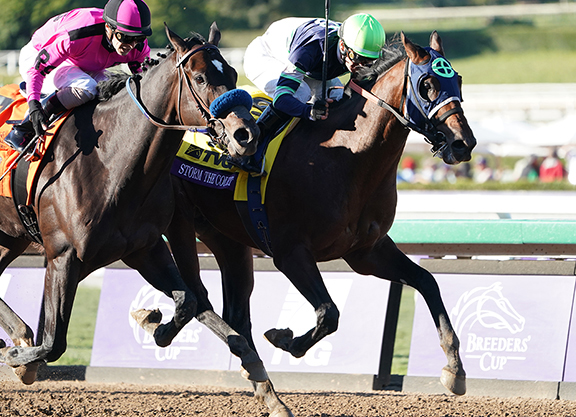 ARCADIA, CA – With the crowd of 41,243 left completely stunned after a stumbling start for 4-5 favorite and 'TDN Rising Star' Dennis' Moment (Tiznow), longshots Storm the Court (Court Vision) and Anneau d'Or (Medaglia d'Oro) battled down the Santa Anita stretch with the former getting the nod by a neck in a shocking GI TVG Breeders' Cup Juvenile. Another bomb Wrecking Crew (Sky Kingdom) completed the trifecta.

The 45-1 wire-to-wire upset winner is the longest-priced victor in Breeders' Cup Juvenile history.

The Exline-Border Racing LLC, David A. Bernsen, Susanna Wilson and Dan Hudock colorbearer, a debut winner sprinting at Del Mar Aug. 10, lost his jockey shortly after the start in an eventful renewal of the GI Runhappy Del Mar Futurity Sept. 2. He was adding first-time blinkers in the Juvenile following a well-beaten third behind 'Rising Star' Eight Rings (Empire Maker) while making his two-turn bow in the GI American Pharoah Sept. 27.

“It's just so special to do this for this for Exline-Border, they've been so supportive through the years,” said winning trainer Peter Eurton, who also upset the 2016 GI Breeders' Cup Juvenile Fillies at 33-1 with Champagne Room. “It just means a lot–my family, my daughter, my wife, my home.”

Eurton continued, “In the American Pharoah, I still feel like he didn't have a chance to run. I still felt a little uneasy about what happened in the prior race down south, so we decided to put the blinkers on him on Flavien's Prat recommendation. It just seemed like it got him a little more focused and he probably would have been able to do it without them–but it did help out a lot. It's a lot of team work.”

Storm the Court shot out to the front beneath Prat and led by about a length through fractions of :23.49 and :47.07 in the 'Future Stars Friday' headliner. Anneau d'Or, off at 28-1 after posting a runaway win at first asking over the Golden Gate lawn Sept. 29, met Storm the Court after making a sweeping move on the far turn and the stage was set. Storm the Court just kept finding from along the inside down the lane, however, and refused to lose.

“Storm has got a special group of owners,” winning co-owner Ryan Exline said. “Most of my family is involved, so that's really special. To get to the finish line with family is always incredible. And then great friends. Pete's introduced us to some great clients that have had faith in us… And Susie Wilson and David Bernsen and Chris Newport and my brother Kyle, my dad Rick, Aaron Kennedy and Dan Hudock. Did I miss anybody? We got a big group. It's fun. We're ready to hit the bar.”

The rail-drawn Dennis' Moment, a powerful winner of the GIII Iroquois S. at Churchill Downs Sept. 14, trailed the field of eight throughout after his horrific beginning while the highly regarded second choice Eight Rings could do no better than sixth after pressing the early pace.

“Dale [Romans] just about took off out of box when it started,”

Jason Loutsch of Albaugh Family Stables said of Dennis' Moment. “We have a lot of confidence in this horse and I have no doubt he'll bounce back. I don't even know how Irad [Ortiz Jr.] stayed on to be honest. That's all that matters right now [is that he's ok]. We know we have a horse who can do anything. He had no chance. That's the bottom line.”

Louisiana sire Court Vision caused a blockbuster upset of his own on racing's biggest stage with a 64-1 shocker in the 2011 GI Breeders' Cup Mile at Churchill Downs. Storm the Court is Court Vision's first winner at the highest level. This is his second graded winner and eighth black-type winner. Storm the Court is listed as the final produce for three-time winner My Tejana Storm. Storm the Court brought $60,000 from bloodstock agent Marette Farrell as an OBS April juvenile after breezing a quarter in :21 2/5. He was pinhooked by Bryan and Holley Rice, who purchased him for $5,000 as a FTKFEB yearling.