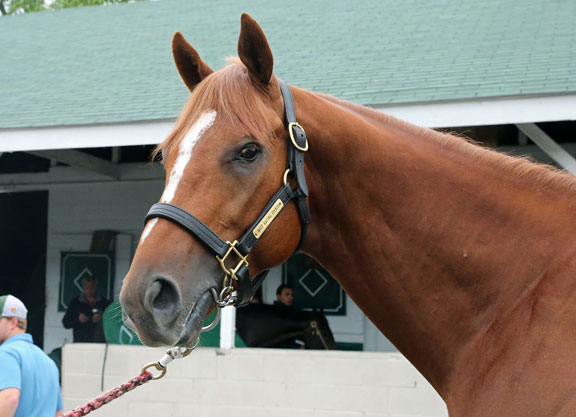 “The discussion [about the Preakness] is going to start in the next day or two, I'm sure,” Mott said. “People want to see the Derby winner in the Preakness. Certainly, for Country House, there's some pressure to go. With Tacitus, there isn't any and we are well-suited with him to go to the Belmont.”

Mott, fresh off saddling his first Derby winner, said his main concern about running Country House in the Preakness stems from the horse's heavy workload this spring. The Preakness would be the colt's fourth race in eight weeks after competing in the GII Louisiana Derby Mar. 23, the GI Arkansas Derby Apr. 13 and the Run for the Roses Saturday.

Mott added that a key to Country House's victory was his improved tactical speed Saturday.

“I thought he had the effort in him and I was very surprised that he broke and was as close as he was early,” he said. “I would have thought it would have been the other way around with Tacitus up where Country House was and Country House in the back where Tacitus was–but that's why it's so interesting. You don't know what is going to happen.”

Mott also reflected on the unusual nature of winning a Derby via disqualification and forecasted that this year's renewal will live on vividly in history because of it.

“I'm thrilled with [Country House] and I'm happy for everyone who has worked with the horse and I think they deserved the win. It's just such an unusual way to have to go to the winner's circle and win a Kentucky Derby,” he commented. “This Kentucky Derby will be talked about for a long time, up there with [Bill] Shoemaker standing up at the sixteenth pole [in 1957 on Gallant Man]. It's one of those things that's not going to go away. We're going to take the win and hopefully we come back and Country House runs big in the future, whatever race it may be–whether it's the Preakness, Belmont, Travers–whatever it is. You hope he continues to show the quality horse that he is.”

Jason Servis reported that original winner Maximum Security (New Year's Day), placed 17th by the stewards, was in good order Sunday morning, but had no thoughts about possibly running at Pimlico.

“For what it's worth, I think my horse was the best horse [Saturday],” Servis said. “We haven't even talked about the Preakness.”

Most other trainers of Saturday's Derby horses were also unwilling to commit to future plans in the immediate aftermath.

“I don't know. I'll have to talk to [owner] Mr. [Will] Farish,” Shug McGaughey said of runner-up Code of Honor (Noble Mission {GB}). “He'll go back to New York this afternoon and we'll go from there. I would definitely like to have a fresh horse for Saratoga and finish the year up. So we'll just see.”

Bob Baffert told TDN Sunday that he's not sure who he will be running in the Preakness, but “right now, Improbable is the only horse I am considering.” Improbable (City Zip) finished best of Baffert's Derby trio to be fourth, while Game Winner (Candy Ride {Arg}) was one spot back in fifth and Roadster (Quality Road) checked in 15th.

Mark Casse, however, said he was looking to send seventh-place finisher War of Will (War Front) to the Preakness after reflecting on how fortunate his charge was not to go down when Maximum Security drifted into this path.

“As much as I want to win the Kentucky Derby, I feel like a lucky man today because I just got him out and jogged him and he's perfect,” Casse said. “The horse racing world should be happy War of Will is such an athlete because not every horse doesn't go down there. I've been saying he's special for a long time … If he's happy and healthy, we're probably going to go to Baltimore. I would think there are probably going to be a few at Baltimore because normal Derbys kind of separate the men from the boys. I would say there are going to be a lot of excuses coming out of yesterday and it will be bigger than usual.”