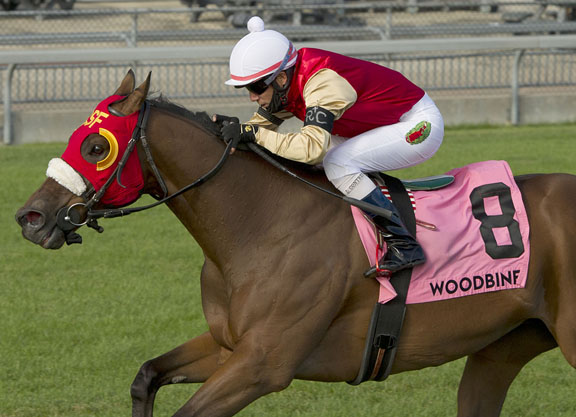 Sam-Son Farm's Count Again (Awesome Again) will try to add his third win of the season in Sunday's 12-furlong GI Northern Dancer Turf S. at Woodbine. A second-out winner going a mile for trainer Neil Howard at Keeneland last fall, the gelding won his sole start for Kent Sweezey in a Tampa allowance in April before finishing third for current trainer Gail Cox in an 8 1/2-furlong Woodbine optional claimer in June. Just missing in second behind Woodbridge (Langfuhr) while stretching to 10 panels at the Etobicoke oval Aug. 29, Count Again closed with purpose to take his latest start in the GIII Singspiel S. Sept. 19. Luis Contreras, aboard for the bay's three most recent starts, returns for the gelding's Grade I debut.

“He ran great,” said Cox of Count Again's Singspiel performance. “It was exactly what he wanted to do, which is to go a distance. A mile-and-a-sixteenth was always a little short for him. So, with the added distance..he was really good. He did win pretty easily.”

She continued, “He's a very nice horse. I know anyone that's trained him has really liked him. He just had this and that which had bothered him, which led to him having some time off. He needed to get really good and comfortable. He seems to like training [at Woodbine]. He does a fair amount of training on the dirt here, but he's been happy, and has come out of his races really well.”

Cox and Sam-Son are also represented in the Northern Dancer Turf by Say the Word (More Than Ready). Third to stablemate Count Again in the Singspiel, the dark bay was sixth in the 2018 Queen's Plate, going on to finish second in the Canadian Triple Crown's final jewel, the Breeders' S. Prior to the Singspiel, the gelding closed to win a 9 1/2-furlong Saratoga optional claimer Aug. 14.

“He was closing ground [in the Singspiel] and he didn't have the easiest of trips,” said Cox. “I think he'll love this distance. He's another one that we had to send away to run farther. And that worked out. But he needs the distance and he doesn't like the Tapeta. He was originally set to run on it, but he just didn't like it.”

Staghawk Stables' Nakamura (Animal Kingdom), stakes placed at three, reeled off three consecutive wins for Graham Motion last season, including his most recent victory in an 11-furlong optional claiming test at Saratoga in August. Despite failing to return to the winner's circle in three remaining starts in 2019, he finished runner-up in the 12-panel GIII Sycamore S. at Keeneland in October. This term, the Maryland-bred came home third in both Keeneland's GII Elkhorn S. and an 11-furlong optional claimer at Saratoga Aug. 16 before finishing fourth–beaten two lengths–in the Singspiel. Accompanied by Kazushi Kimura last time, the rider gets the return call this time.