Wilsons 'Count' Down to Breeders' Cup 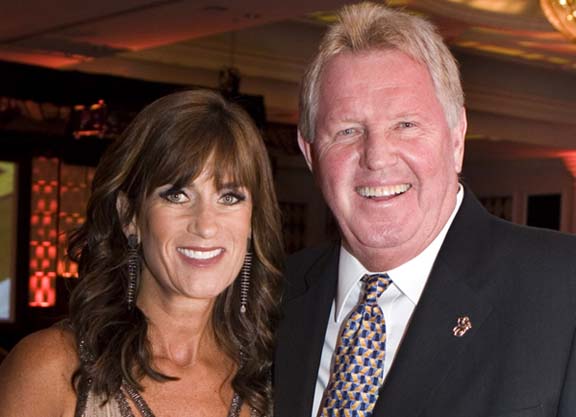 When Count Alexander (Scat Daddy) coasted home to an impressive debut victory (video) going six furlongs over the turf at Woodbine Sunday, it was the perfect first step in a plan developed by longtime horseman Mike Lightner on behalf of owners Holly and David Wilson.

“Mike Lightner has been buying yearlings for us–we usually buy between five and 10 a year–and he takes them to Florida and breaks them and trains them and lets them grow up there,” said David Wilson. “If it looks like they are going to be quality individuals, then we ship them to the West Coast. He thought this one was going to be good on the grass, so he said, 'My daughter [trainer Mary Lightner] is going up to Toronto, so let's run him up there in a maiden special weight. Three weeks after that, there is a Win and You're In race [Sept. 17 GII Summer S.] for the Breeders' Cup. Mike's plan was to ship him to Toronto, run in this race and hope he did well and then look for that Win and You're in in three weeks.”

Wilson, who owns the Wilson Automotive family of car dealerships, is based in Southern California and watched Count Alexander's race on TVG from Del Mar. He admitted he was impressed by what he saw from the colt.

“I loved his stride on the backstretch, it looked like he had a really nice stride,” Wilson said. “And then when they turned for home and he leveled out, it was really very impressive. The jockey [Slade Callaghan] called Mike, who is in Florida, and told him in 30 years of riding, he had never had a horse he couldn't pull up, but he could not pull this horse up. So distance is not going to be any kind of problem for this horse.”

The Wilsons have about 30 horses in training, mostly with California trainer Vladimir Cerin, and traditionally purchase their racing prospects as yearlings. The decision to purchase Count Alexander for $210,000 at the OBS June sale this year, was mostly an emotional one and one which began with a talented 2-year-old colt by The Factor purchased by the Wilsons for $140,000 at last year's Keeneland September sale.

“I named him Lieutenant Logan (The Factor) after my father,” Wilson said. “Mike told me in 35 years of training, he'd never had a horse like that. He was at Gulfstream training and a front-end loader dropped a load of lumber and the horse shied, bucked the rider off and ran into a fence and killed himself. Mike called me crying, 'In 35 years, I've never had a horse like that. He's the best horse I ever had in 35 years.' Mike was so despondent and felt so bad–of course it wasn't his fault–but he felt so bad. This was two weeks before the 2-year-old sale and I said, 'Go get another one.' He said, 'I could never–in 35 years I've never had a horse like that.' I said, 'Well, go look. Get your mind off it. Go do something different.' So he went to the Ocala sale and he got this horse. Mike said he is good, he's not Lieutenant Logan, but maybe he will be. Hopefully, this will be a happy ending to what started as a very sad story.”

The Wilsons have been involved with racehorse ownership for two decades now and have been represented by the likes of 2000 GI Hollywood Gold Cup winner Early Pioneer (Rahy) and multiple stakes winner Big Sky Chester (Afleet), fifth in the 1997 GI Breeders' Cup Turf.

“My father was a rodeo cowboy, so I grew up on a ranch and I was with horses all the time–Quarter Horses, mostly, and Appaloosas. We just always liked being around horses, so we started buying them and running them,” Wilson explains of his involvement in the industry.

The Wilsons could be well-represented when the Breeders' Cup makes its first appearance at their hometown track of Del Mar this November. If Count Alexander continues his progression in the Summer S., he could join Follow Me Crev (Quality Road), most recently third in the GII Suburban H., and GII Best Pal S. runner-up Dia de Pago (Macho Uno).

“Dia de Pago–which is payday in Spanish–runs in the [GI Del Mar] Futurity on Labor Day,” Wilson said. “We hope he wins that and then he would be in the Breeders' Cup, too, and that would be three horses.”