Count Again Somehow Under the Radar in Maker's Mark Mile 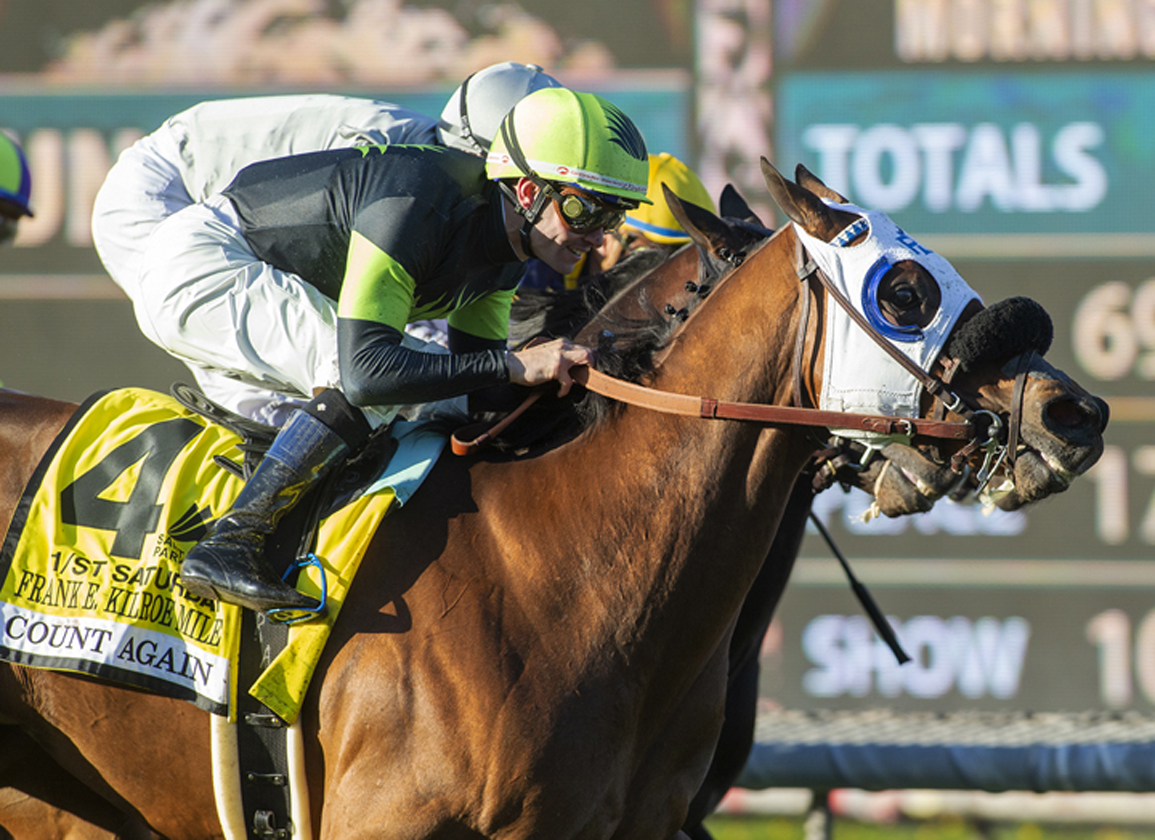 The owner of some very solid West Coast form, Count Again (Awesome Again) nevertheless projects to be at least a little bit forgotten from a pari-mutuel perspective in a high-class renewal of the GI Maker's Mark Mile, the Good Friday feature at Keeneland.

A maiden winner during this track's fall meet in 2019 when under the care of Neil Howard, the bay won the 10-furlong GIII Singspiel S. for trainer Gail Cox in 2020, but has been kept between eight and nine panels since being switched to the barn of Phil D'Amato. Victorious in Del Mar's GII Seabiscuit H. in his first start for the new outfit at the tail end of that season, Count Again was third in last year's GI F.E. Kilroe S. and GII Eddie Read S., but was freshened off a last-of-five effort in the GII Del Mar Mile S. The break has seemed to do the trick, as he proved narrowly best first off the layoff in the GIII Thunder Road S. Feb. 5 and flew home to take this year's Kilroe Mar. 5.

Flavien Prat was in the boot for Count Again's two most recent successes, but the recently relocated rider will get a leg up from trainer Chad Brown on Juddmonte's European invader Masen (GB) (Kingman {GB}). A maiden winner and third in the G3 Tyros S. for Ger Lyons at two, the maternal grandson of Intercontinental (GB) (Danehill) faced elders in all three starts last term, winning the valuable Sovereign Path H. on Irish Champions Day at Leopardstown Sept. 11 ahead of a front-running tally in the Listed Knockaire S. Oct. 23, both over seven furlongs. It will be interesting to see if he is quick enough to lead this group.

Smooth Like Strait (Midnight Lute) also invades from the Golden State to launch his 5-year-old campaign. Never out of the top three in 2020, his lone victory came in all-the-way fashion in the GI Shoemaker Mile in May, but he was unlucky not to add to that total when runner-up and beaten a half-length or less on five occasions, including when making the majority of the running in the GI Breeders' Cup Mile.

The commonly owned Agnes Gold (Jpn) duo of In Love (Brz) and Ivar (Brz) each have earned Grade I plaudits over this course. In Love came with a stinging stretch rally beneath Alex Achard to cause a 12-1 upset of last October's Keeneland Turf Mile, but was farther back on Breeders' Cup day and rallied mildly to be seventh. Ivar won the 2020 Shadwell Mile and was a keen fourth in defense of his title last fall before settling much better and kicking home nicely to be third at longshot odds in the Breeders' Cup, a length behind Smooth Like Strait.