Count Again Locks Up BC Berth in Shoemaker 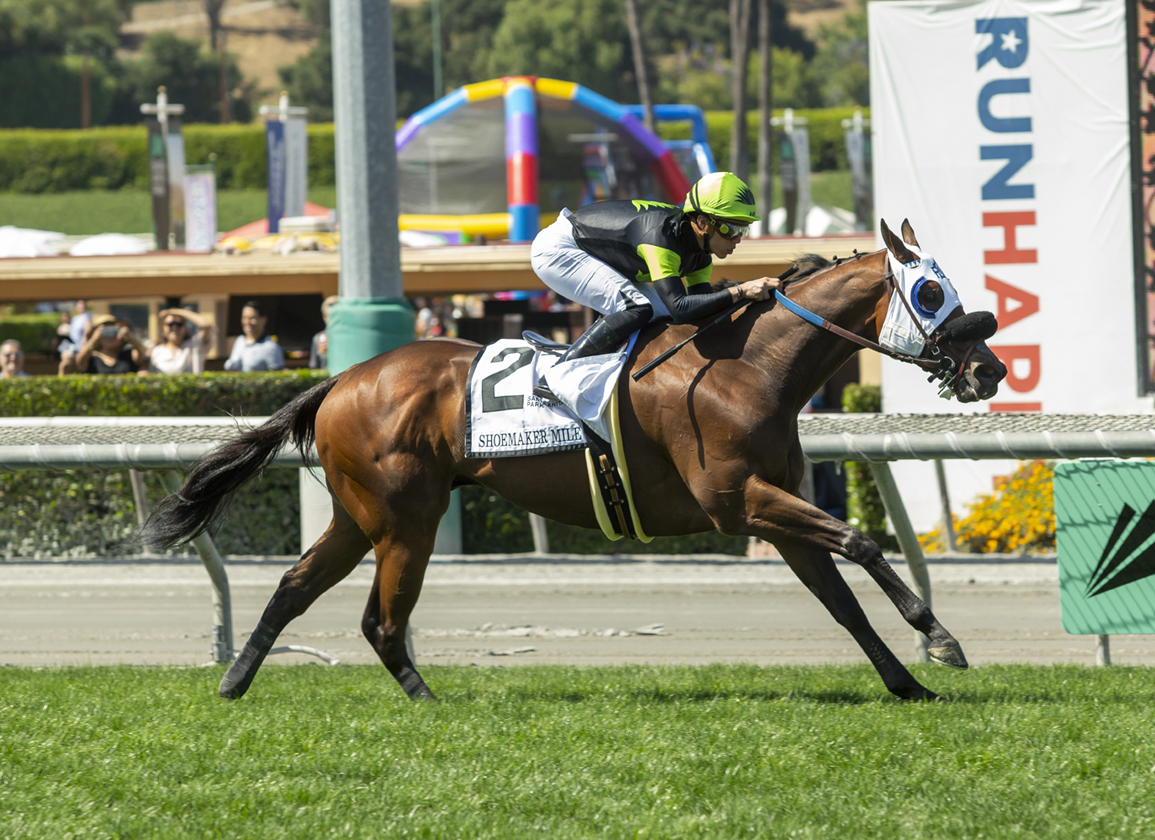 Seven-year-old Count Again (Awesome Again) sliced through horses and blew past heavily favored Smooth Like Strait (Midnight Lute) in the lane to annex Monday's GI Shoemaker Mile S. at Santa Anita. Picking up an automatic spot in the starting gate for the GI Breeders' Cup Mile later this year, Count Again's victory was the fourth on the card for East Coast invader Irad Ortiz, Jr.–with a runner-up finish in the only other race run to that point–and was won in notably similar fashion to Ortiz's score in the GI Hollywood Gold Cup one race earlier.

Count Again was content to caboose the field early as 2-5 Smooth Like Strait was forced to stalk through splits of :22.54 and :45.58. The chalk blew the race apart on the turn, but Count Again immediately caught the eye in the scan for potential challengers. Having been guided out into the clear and already into second as noses pointed for home, Count Again's momentum could not be stopped as he took over at the eighth pole and built his advantage to 2 1/4 lengths at the line. Masteroffoxhounds (War Front) gave trainer Phil D'Amato the first and third finishers. The winner stopped the clock in a snappy 1:32.40.

“I just followed instructions,” said Ortiz. “Phil told me to let him do his thing and don't rush him. He has a big turn-of-foot. The horse was ready to run today, was ready to win.

“They went a little fast, but I wasn't too far [back]. Honestly, I was happy where I was with my horse. Most of the time, he comes from off the pace. I just wanted to be in contact with the field and when he put me right there in the first turn…I said, 'Why not', let him be there and he responded really well. When I went through horses at the quarter pole, Phil told me to make sure to keep him outside down the stretch. In the clear and that's what I did. When we were in the clear, I asked him and he took off.”

A Grade III winner over 10 panels at Woodbine in 2020 for his breeder Sam-Son Farm and trainer Gail Cox, Count Again was bought into by Agave Racing and transferred to D'Amato ahead of a last-to-first score in that November's GII Seabiscuit H. The gelding's form had been somewhat in and out since then, but he kicked off his 7-year-old season with a course-and-distance victory in the Feb. 5 GIII Thunder Road and doubled up in the GI Frank E. Kilroe Mile Mar. 5. Count Again was most recently sixth in a slow-paced running of Keeneland's GI Maker's Mark Mile Apr. 15, finishing one spot ahead of next-out GII Dinner Party S. winner Set Piece (GB) (Dansili {GB}). Smooth Like Strait was third that day after setting the pace.

“He was in great position today and turning for home, he had the leader measured,” D'Amato said. “He was sitting on a big race today. This puts him in a position to win the Breeders' Cup Mile in November.”

Pedigree Notes:
Count Again's half-brother Ransom the Moon was purchased privately from Sam-Son by Mark Martinez's Agave Racing and Jeffry Wilke before going on to take back-to-back renewals of the GI Bing Crosby S. in 2017 and 2018 for D'Amato. The Calumet Farm resident has first 2-year-olds this season, with his top seller fetching $375,000 at the recently concluded Fasig-Tipton Midlantic sale.

Count Again is one of 15 Grade I winners for the late fellow Ontario-bred Awesome Again. He has an unraced 3-year-old half-sister by Pioneerof the Nile who breezed a half-mile at Woodbine Sunday in :47.60 (190/87); and a Malibu Moon 2-year-old half-sister purchased for $30,000 at KEEJAN '22 by Shannondoe Farm. Count to Three was bred to Not This Time for 2022 but a foal has not yet been reported. Count Again's second dam won the GI Matriarch S. on this same circuit.